After the jump, Brett Ratner is a jack-ass, FOX has turned into the Seth MacFarlane Network and we take a look back at the loss of another great show. END_OF_DOCUMENT_TOKEN_TO_BE_REPLACED

Welcome to another edition of the Entertainment Link-Off. In celebration of the release of Zombieland, here’s Emma Stone.

After the jump, more zombie related stuff, sex gone wrong, some movie news and take a look at how certain movie franchises should have ended. END_OF_DOCUMENT_TOKEN_TO_BE_REPLACED

After a week hiatus, I’m back! Hopefully Steve’s Entertainment Link-Off wasn’t too painful to read. This week, let’s shift the focus back onto entertainment related topics only. Yesterday marked the return of Dollhouse on FOX. After seeing Epitaph One, I was totally pumped for the season premiere. I wasn’t expecting the show to return due to its anemic ratings, but sometimes TV miracles can happen (hurray for budget cuts). If you aren’t watching the show… what’s wrong with you? Dichen Lachman and Eliza Duskhu (pictured) should be good enough reasons to tune in.

After the jump there’s some comic book movies stuff, CW’s neverending cycle of suckage and get your Glee on with ‘Single Ladies’. END_OF_DOCUMENT_TOKEN_TO_BE_REPLACED

After a slight delay (again), this week’s edition of the Entertainment Link-Off is finally here! This weekend marks the release of the highly anticipated film adaptation of the novel The Time Traveler’s Wife, hence I’m using Rachel McAdams to kick off this entry. The film was scheduled to be released last fall, but thanks to Star Trek (which is a fantastic film by the way) requiring Eric Bana to shave his head for the role Nero, the reshoots for The Time Traveler’s Wife couldn’t take place until he grew his hair back. So how was the movie? Did it remain faithful to the novel? Find out later when I post the movie review. In the meantime, let’s take a look at the happenings in film, TV and whatnot.

After the jump some Time Traveler’s Wife stuff, notes about upcoming films, Megan Fox talks about peer pressure and we find out what G.I. Joes do during their free time. END_OF_DOCUMENT_TOKEN_TO_BE_REPLACED

While the WB panel was busy promoting their latest batch of films on Friday, two other sci-fi TV shows took snagged a lot of attention. Cult-favourite Dollhouse wowed fans with the airing of Epitaph One + Q&A, while ABC’s Flash Forward officially welcomed a new addition to their cast. END_OF_DOCUMENT_TOKEN_TO_BE_REPLACED 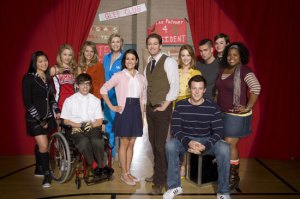 “Don’t stop believing!” I got that song stuck in my head and it’s on full rotation ever since I watched the extended trailer for the new FOX show “Glee” (the sneak preview airs tomorrow night after American Idol). This is one of the new shows on the FOX 2009/2010 schedule. So does FOX’s schedule look any good? Find out after the jump. END_OF_DOCUMENT_TOKEN_TO_BE_REPLACED

The television networks are preparing to announce their fall schedules next week. Headlining this article is Minka Kelly. The soon to be former Friday Night Lights star is set to play the lead in the new CW pilot Body Politic. Unfortunately the pilot is being overshadowed by Twilight: The Series Vampire Diaries, recycled material Melrose Place 2.0 and a scripted version of America’s Next Top Model Beautiful Life. So here I am doing another plug in hopes of generating more attention to a potentially good show, unlike the other stuff that the CW has to offer. I want the show to make it into the fall schedule because it has a great cast and it has a storyline that doesn’t involve a bunch of rich spoiled teens (also the inner VM/FNL fan is also yearning to see this)! While Body Politic isn’t generating enough buzz, the good news is that it appears people are starting to warm up to it. However, the bad news is that the CW usually makes the wrong decisions and are too stupid to realize it until it’s too late (in this case, pick up Vampire Diaries, Beautiful Life and Melrose Place 2.o instead).

After the jump… some good news… and bad news… END_OF_DOCUMENT_TOKEN_TO_BE_REPLACED