I think we’ve gone over this before but I love to cook in my spare time. Despite that one misadventure on The Lowdown radio show, I’m actually okay at cooking. One of the things that I like doing during summer is barbecuing hot dogs. Now, a hot dog is simple enough but I like to kick it up a notch with some unique toppings so I’m always on the look out for new recipes and combinations to try.

Today, I have a collection of various popular hot dog toppings from around the world. I know I’ll be giving these a try next summer. Granted, I should keep them in mind for something to eat near Christmas.

END_OF_DOCUMENT_TOKEN_TO_BE_REPLACED

When you go out to a restaurant, the menu really only has a few different types of pasta. They’re generally your basics like penne, spaghetti, gnocchi, ravioli and lasagna. If you grew up with an Italian family (of all Canadian citizens but still identify as Italian instead of Canadian), you would know that there are many, many, many more varieties of pasta besides your standard restaurant selections.

So to give you a little bit of help outside of the tutelage of an Italian home, we have this handy absolutely massive infographic for your perusal that has over 150 varieties of pasta that even has cooking and sauce pairing advice.

END_OF_DOCUMENT_TOKEN_TO_BE_REPLACED

I don’t know if you noticed but we’re pretty big fans of food around these parts. Who can blame us? Food, done well, tastes amazing.

Now, we’re always looking for new info and tips about food. That brings us to this infographic. If ever you’ve been unsure how long you can keep your food for, this handy infographic has the answer for you. END_OF_DOCUMENT_TOKEN_TO_BE_REPLACED

It’s been almost one year since we did the original best of Epic Meal Time so I thought now was a good time to look at the best of this year in EMT.  It’s no secret to regular readers that we’re big fans of food and cooking. But we’re nowhere near as big fans as the crew at Epic Meal Time. Their tales of cooking, drinking and gluttony are legendary (though divisive) throughout the internet. So today, we take a look at another set of the best episodes of EMT based on the number of views they’ve received. END_OF_DOCUMENT_TOKEN_TO_BE_REPLACED

The Man Lab Kitchen is open for big sporting events too. While the Grey Cup might be unheard of in America, in Canada, it’s a pretty big deal. No, it doesn’t have the same big parties as the Super Bowl but that doesn’t mean that we don’t throw a bash at Lowdown HQ. So today, the Kitchen previews some of the things that’ll be part of our Grey Cup spread. END_OF_DOCUMENT_TOKEN_TO_BE_REPLACED

With Halloween just over a week, I thought we’d do something a bit different today. Have you ever tried making your own candy? I haven’t but thanks to some recipes that Bon Appetit has found, I might be willing to give it a try before Halloween. Giving it away probably isn’t a good idea but there’s nothing stopping you from eating it all yourself. END_OF_DOCUMENT_TOKEN_TO_BE_REPLACED

This Monday is Labour Day. Since this marks the unofficial end to summer, there’s no time like the present to fire up the grill. So we’ve reopened the Man Lab’s kitchen for the first time in nine months to give you some of our favourite grilling recipes. If you’re looking for recipes that say “turn on grill and slap on steak,” you’ve come to the wrong place. That little bit extra effort means a lot when it comes to flavour and impressing your friends.
END_OF_DOCUMENT_TOKEN_TO_BE_REPLACED

One of my favourite cooking shows of all-time and one of the best cooking shows ever is Alton Brown’s Good Eats. The show takes a basic yet comprehensive approach to teaching you how to cook as Alton Brown shows you simple yet delicious ways to cook a different dish every week. He also examined cooking techniques, culinary history and selection and use of difference appliances.

So to help you figure out your menu for the weekend, we present you every episode of Good Eats. END_OF_DOCUMENT_TOKEN_TO_BE_REPLACED 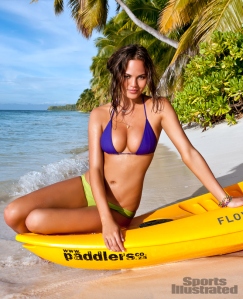 Just so you know I haven’t forgotten our trademark set of early set of SI Swimsuit issue cover odds, here’s Chrissy Teigen. She’s definitely one of the 2013 front-runners.

The Simpsons just aired their 500th episode. They’ve been on air since 1989 but didn’t make a ratings splash until the famous 1992 episode called “Homer At The Bat.” Here’s the story behind the episode that gave Fox their first ratings win. (Deadspin)

With the NHL Trade Deadline next week, there’s an easy way to make yourself an NHL insider. Just follow the E.K.L.U.N.D. system. (On The Forecheck)

It’s only been a month since Versus switched to NBC Sports Network but so far the ratings are fairly abysmal. (Sports Business Journal)

After the jump, more sports TV news, why the Oscars will be wrong and selling a university in Australia is a snap. END_OF_DOCUMENT_TOKEN_TO_BE_REPLACED

It’s been a while since we’ve done a best of the interweb post but since I’ve got nothing better to post today, why not drop one here. It’s no secret to regular readers that we’re big fans of food and cooking. But we’re nowhere near as big fans as the crew at Epic Meal Time. Their tales of cooking, drinking and gluttony are legendary (though divisive) throughout the internet. So today, we take a look at the best episodes of EMT based on the number of YouTube likes they’ve received. END_OF_DOCUMENT_TOKEN_TO_BE_REPLACED