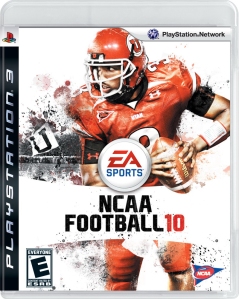 NCAA Football 10 is the 13th iteration of the critically acclaimed college football video game. This year’s edition is the third on the PS3 which I’m reviewing it on. The challenge with sports games like this is that, since it comes out every year, a lot of work has to go into it to keep it fresh. It’s easy to just sit back and only update the rosters and playbooks every season. Instead, EA Sports has gone big with this edition with two big new features and a major overhaul of another game mode. So do the changes make NCAA 10 the first must play college football game on PS3 or is it just another step in the right direction? Find out after the jump.

Gameplay: The first thing that hit me when I played a game is that I haven’t played an EA Sports football game for a while. The controls were different but somehow felt more natural so I can’t complain. The number of plays is utterly astronomical. I can’t go through all of them to pick the right one without getting a delay of game penalty every time so i just go with Ask Corso which works fairly well. Every now and then, he (and your Road to Glory coach) picks something stupid but the easy to use audible setup makes life so much easier than my old Madden 03 game. Speaking of plays, there is are now “Setup” plays linked together. Perform one play well and you can use the linked (or setup) play to trick the defence for a big gain. There is also a “Family Play” set of controls which maps everything to one button. It’s easy enough except for passing (which is hard to direct) and fair catches (which don’t exist).

In addition to “Play Now” and some mini-games (which really helped me pick up the nuances of the game), there are two (technically three) career modes to play through. There is Dynasty and Online Dynasty which are the same thing except one is solely on your console and the other can be played online with/against 11 friends but both last 60 season of attempted domination. You juggle recruiting players for the future and dealing with winning a national championship. That’s basically all you do in dynasty. Play a game, recruit, play a game, recruit, finish season, sign recruits. If college football domination and micro-management are your thing, then you’ll get a lot out of it. Fortunately, there is a lot of CPU help to get you through the recruiting if you would rather play games. Maybe it’s because I’m not a big college football fan but I just don’t find recruiting as fun as pursuing a big trade or free agent in other dynasty modes. 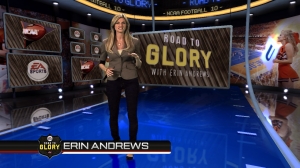 There is also a revised Campus Legend feature (similar to NHL 09’s Be A Pro), now called Road to Glory. This is one of the big selling points because it’s hosted by Erin Andrews in a series of TV show style segments. Seriously, Erin’s name is all over the box and the PR material that EA Sports sent me. The only thing is that the title, which became a joke in the blogosphere, is now slightly inappropriate because of that Erin Andrews nude video. Anyway, Erin and Kirk Herbstreit host a show about your football career from your high school playoffs through your graduation with your actual game highlights and analysis. You’re recruited based on your high school performance though I was able to choose from every team. Your performance mostly determines your spot on the depth chart which you can move up by practising. You only play when the coach puts you on the field which can be frustrating but realistic. However, of the two career modes, I’ve spent more time playing RTG because it’s just more fun.

There are two really good new features in NCAA 10. The first is Teambuilder. You can create your own team from uniform to stadium to roster online and download them for your game. The customization of your team is better than any football or hockey game that I can remember. If I had to nit pick, there would be a few things to change on this. There’s no custom stadium builder which saves on file size but makes it hard to accurately create a stadium because your just choosing an existing stadium with a new field layout. Each position has three different player types (for example: Speed, Balanced, and Power RB), but it’s hard to get each player into the subcategory you want. I’d like it if you could do that with a drop-down menu and then modify the ratings instead of just trying different ratings until you get the player type you want. And can we get some generic mascots too? But those are three very small issues with what is otherwise an excellent new feature that is lightyears ahead of anything else. You can even import your created teams into Dynasty mode.

The other new feature is Season Showdown. You enter it by selecting your favourite team and every game you play after that earns points for your team. You can only pick a new team once so you can’t switch teams every week to screw over Notre Dame. The Showdown is a hard system to explain because how you play earns points for an online proxy for the real NCAA football season. Your objective is to earn points for your school by playing the game and you want to earn more points than your school’s real opponent that week. There are five areas to earn points in (games vs. CPU, games online, games vs. Showdown opponent, online voting, and online trivia) and the week’s winner has to outpoint their opponent in at least three areas. After the regular season is played through, a 32 team playoff starts with the winning school becoming the Season Showdown national champion. It’s a unique concept but I don’t know how good it will be until the season kicks off at the beginning of September.

There’s one thing overall that bothers me, though. It’s that you have to manually save rather than autosave. I just can’t understand why there isn’t an autosave feature for your game. It’s in every other EA game I’ve played in the last three or so years, why not this one? Maybe I missed an option in the menu but I lost a lot of progress on my first try at dynasty mode assuming there was an autosave function. And I do know that online dynasty has an autosave. And for that matter, why can’t I save mid-game? I wouldn’t have imagined that would be too difficult in a football game.

Graphics: The graphics are good, that was to be expected. From video of the new Madden NFL 10, it’s not reached that upper level though. The crowd doesn’t look good or lively. The in-game “broadcast” graphics still look like a video game rather than a TV broadcast. There are some graphics glitches that show up every now and then. Helmets may load up as white every now and then. The refs are all non-existent except when calling a penalty. When you lose confidence in RTG and the routes start shaking to make them harder to read, there are noticeable flickering black lines in the coach cam. And speaking of RTG, I would have liked if the “set” had your team’s colours on there instead of Boise State’s. The RTG setup looks nice otherwise. The menus and in-game interface are easy to navigate through an make my life easier, though I would like the ESPN ticker to look more ESPN-ish and to see the name/school of the fight song playing. Overall, the game looks very good. It’s not the best looking game EA has ever made (more on that next week) but it’s a very respectable effort. Mind you, it could be because I’m using a PS3 on an SD TV. I just wish that some of these developers would make a game ready for the 1080i HD of the PS3 instead of stopping at the 360’s 720p.

Audio: There’s not much in the way of good things to say about the audio. The ESPN SportsCenter updates are too quiet compared to the fight songs that usually play. The commentary is nothing special. Erin Andrews’ sideline reports take too long and often force the commentators to skip a play as you would expect during a real game broadcast. But they didn’t make up for it like Dave Alter and I did when we ran into that calling UWO Mustangs football. I actually prefer the audio in the Road To Glory mode to the other game modes. In RTG, you don’t get commentary. Instead, you hear all the field noise, the crowd, and the PA announcer. Those are all well and good but where is the stadium music? It’s near silence between plays. There’s the obligatory fight song after every scoring play but there is almost no band or licensed music like you would actually get at a college football game. For me, it hurts the ambience and makes the audio overall seem a bit more like a budget title.

Final Thoughts: On the last generation of consoles (PS2, XBox), the NCAA series of football games was arguably better than the Madden NFL series. Well, when I say that, I mean by the end of the life of that generation of consoles. Early on, Madden was the king of football games and I think that is the case this year. That might be part of the trouble with being better than Madden in the past. You are inevitably inviting comparisons to the other game. If you’re a college football fan, and now a CIS football fan, there is something for you in this game. If you don’t live and die by your alma mater’s football team, while this isn’t a bad game, I think you would be better off waiting for Madden. I’m not saying that this is a bad game. I’m just saying that with the economy and all, you’d be better off getting what should be the better game.

For the complete audio review of NCAA Football 10, click here.