It’s time for The Lowdown’s annual tradition. I’m not talking about another anniversary show but tomorrow is actually the 8th anniversary of The Lowdown (our first episode was on October 30, 2007). No, today we do our annual look at some really cool Jack-o-Lanterns to give us all some inspiration for our own. One day, one of us might actually do something cool enough to be featured here. Today, we sit back and watch.

END_OF_DOCUMENT_TOKEN_TO_BE_REPLACED

It’s Halloween today. While going out in costume kinda goes out of style when you reach high school (before coming back in full force when you can legally drink in university), for celebrities, it’s a necessity for PR that they go out in costume at Halloween. I’m not sure that it’s so much a suggestion or a fun time for them as a mandate of their celebrity status.

Since it’s Halloween, let’s look at some past Halloween costumes worn by celebrities.

END_OF_DOCUMENT_TOKEN_TO_BE_REPLACED

Halloween is just over a week away. As per usual, I still haven’t carved my pumpkin for the year yet. It’s not that I’m prone to procrastinating and leaving things to the last minute. Everyone knows how to carve a standard Jack-o-Lantern but I really don’t want to stick to the status quo pumpkin design. That’s why I once again looked up some amazing looking Jack-o-Lanterns for inspiration. Maybe you should take note when carving yours.

END_OF_DOCUMENT_TOKEN_TO_BE_REPLACED

Halloween is just under a week away. As usual, I still haven’t carved my pumpkin for the year yet. Everyone knows how to carve a standard Jack-o-Lantern but I really don’t want to stick to the status quo pumpkin design. That’s why I once again looked up some amazing looking Jack-o-Lanterns for inspiration. Maybe you should take note when carving yours.

END_OF_DOCUMENT_TOKEN_TO_BE_REPLACED

I hope you know that today is Halloween. If you didn’t, you were probably wonder why that witch of a boss of yours was dressed like an actual witch. Anyway, before you trick or treat (or hand out candy to trick or treaters), check out this handy infographic with some fun stats about Halloween. Did you know that Americans will spend $11.7 billion on Halloween this year? END_OF_DOCUMENT_TOKEN_TO_BE_REPLACED 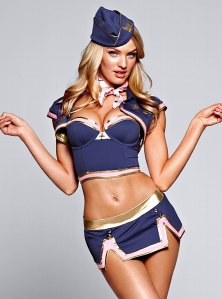 It’s the middle of the week and we’re less than a week from the Presidential Election. But today’s Halloween so we’ll get through that first. Let’s kick off with Candice Swanepoel dressed as a stewardess. If only all airline stewardesses looked like that… I mean, apart from the ones on Virgin Airlines.

The New York Times editorial board has endorsed Barack Obama as the best choice for President of the United States. If the biggest newspaper in America endorses him, that should tell you something. (New York Times)

The Romney campaign team is dispatching a team of poll watchers to Wisconsin. However, the voting info they gave them for Wisconsin is largely false and written to suppress voting. (Think Progress)

After the jump, Romney and Sandy, some special Halloween polling and the greatest horror movie quotes. END_OF_DOCUMENT_TOKEN_TO_BE_REPLACED

Halloween is just a few days away. There’s just one problem for me, though. I haven’t carved a pumpkin yet. Now everyone knows how to carve a standard Jack-o-Lantern but I really don’t want to do standard. That’s why I looked up some amazing looking Jack-o-Lantern for inspiration. Maybe you should take note when carving yours. END_OF_DOCUMENT_TOKEN_TO_BE_REPLACED

With Halloween just over a week, I thought we’d do something a bit different today. Have you ever tried making your own candy? I haven’t but thanks to some recipes that Bon Appetit has found, I might be willing to give it a try before Halloween. Giving it away probably isn’t a good idea but there’s nothing stopping you from eating it all yourself. END_OF_DOCUMENT_TOKEN_TO_BE_REPLACED

Halloween’s over for another year and it was a bit more interesting than usual. Anyway, let’s kick off the first linkdump written on the new layout with new Guess model Julia Lescova.

The 1% might say that they’ve earned their wealth but they sure aren’t doing anything to earn themselves any sympathy. For example, a law firm’s Halloween party featured all employees dressed as the recently foreclosed. (New York Times)

One of the best Halloween traditions is the annual Simpsons Treehouse of Horrors special. Here is a ranking of all segments over the last 22 years. (SplitSider) Really, any from Treehouse V could’ve been #1 so this is one of the seldom seen good choices for #1.

Shaq has a new book coming out soon. Some of the released excerpts explain why he and Kobe hate each other. (Deadspin)

After the jump, Kim and Kris are no more, more leftover Halloween links and the FNL Emmy trailer. END_OF_DOCUMENT_TOKEN_TO_BE_REPLACED

For the second week in a row, we’re changing up the Monday music post. This week, we’re featuring some music that are absolute musts on your Halloween playlists. This is something we touched on slightly on the first episode of the radio show on October 30, 2007, when we played the Monster Mash. But there are quite a few good Halloween songs for you to play today. END_OF_DOCUMENT_TOKEN_TO_BE_REPLACED