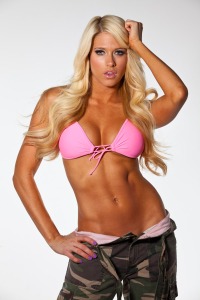 It’s Sunday, Sunday. Gotta get down on Sunday. It’s not just any Sunday today. It’s actually WrestleMania Sunday! Are you ready for some wrestling?! I’m fairly certain the former WWE Women’s Champion Kelly Kelly is.

This year’s WrestleMania is really just an attempt by the WWE to recreate their biggest match ever. That would be Hulk Hogan vs. Andre the Giant at WrestleMania III. This year marks the 25th anniversary of that match which made the WWE an absolute power house. (Grantland)

One of this year’s feature matches is HHH vs. The Undertaker in a Hell In A Cell match. Normally a match wouldn’t have political implications but given the WWE’s anti-bleeding policies and Linda McMahon’s political aspirations, this match is getting more attention than it otherwise would have. (The Atlantic)

Here’s a pretty good thought: Slap Shot might be the most honest sports movie ever made. It might be the only one to really grasp the fan/player/owner dynamic. (Deadspin)

After the jump, more WrestleMania links, the Leafs are a disaster and the Bohemian Rhapsody singer synced up to Queen. END_OF_DOCUMENT_TOKEN_TO_BE_REPLACED

The very public ballot box stuffing campaigns of the past seemed to be missing in this year’s NHL All-Star fan voting. However, very quietly, the fans of the Ottawa Senators and Toronto Maple Leafs stuffed the ballot boxes to get their boys into the game as starters. In fact, of the six starters voted in by fans, four are Sens and one is a Make Believe. Eight of the top-nine vote getter played for one of the two Ontario teams.

It has become painfully obvious that the current system of fan voting is broken. Whether the ballot stuffing campaigns are public or not, NHL fans are clearly not using their power to vote in All-Star starters to vote for the best players in the league but as a means to execute some sort of cruel joke on hockey fans everywhere. It’s time that the current system is scrapped in favour of one that mitigates the risk of blatant fan tampering with the All-Star Game. END_OF_DOCUMENT_TOKEN_TO_BE_REPLACED

I consider it an event whenever I get to go to the big city. When you live in a city of some 70,000 people and you go to a city of some 6 million people, I think it qualifies as an event. Granted, I was just there about three weeks ago so maybe a return visit to Toronto isn’t as special this time around. But that doesn’t mean I can’t take another look at Canada’s biggest city which we derogatorily call “the center of the universe.” END_OF_DOCUMENT_TOKEN_TO_BE_REPLACED

Erin Andrews is the first woman to endorse Reebok’s ZigTech shoes. I can see why Reebok hired her.

Yesterday, Jackie had the video of IBM’s Watson supercomputer taking down Ken Jennings and Brad Rutter in a practice game of Jeopardy to no one’s surprise. But here’s a deeper look inside how Watson works and why it will eventually lead the machine revolt against mankind. (Wired)

A random topic of conversation that’s crept up over the last week has been who you would cast in a 2011 remake of Space Jam. Experts (bloggers) were called in and here are their choices. (The Good Point)

Looking for tips to get better at Twitter? One of the sports world’s best tweeters, Darren Rovell, shares his 13 secrets to success. (CNBC)

After the jump, the most talkative NFL TV crews, active shutter 3D eyes, and we love to hear the boos. END_OF_DOCUMENT_TOKEN_TO_BE_REPLACED

Ever been the victim of the proverbial Turkey Dump? I haven’t. I’m the one that’s always doing the turkey dumping. Yes, I realize that can mean more than one thing depending on how you read it. In today’s Humanoids column, I do a turkey dump of seven dumpees that have had it coming for a long time. Of course, this is going to catch most of them off guard because they’re mostly American but it was just Thanksgiving in Canada so that’s all that matters to me. END_OF_DOCUMENT_TOKEN_TO_BE_REPLACED

July 1st had it all going on. It was the start of NBA Free Agency which kicked off LeBronukkah. In Canada, it was a national holiday and Canada Day. I mean that it was the start of NHL Free Agency and the country’s birthday. The 30 teams continued their quest for Lord Stanley’s Cup which started at the draft. At least “Free Agent Frenzy” is better than being named after one man. Unless you call this “Koval-up-chuk.” Anyway, did your favourite team make a big move over the last 24 hours? A recap of the day’s events and analysis after the jump. END_OF_DOCUMENT_TOKEN_TO_BE_REPLACED

Some things will just spoil your day. Whether it’s a late post on The Lowdown Blog or your favourite sports team being taken down by the evil empire, there are some things you’d rather not have to put up with. Of course, spoilers are also those folks that tell you the ending of a movie or TV show before you see it. For example, in 1980, you were likely to be bludgeoned to death with a plastic lightsaber if you mentioned that Darth Vader was Luke’s father. We try to avoid doing the latter in this post while we talk a lot about the former in this post. I’ll spoil this post for you by saying that, as with most of my diatribes, it makes as much sense as the last sentence. END_OF_DOCUMENT_TOKEN_TO_BE_REPLACED

It’s been a long week. For some, it’s been a pretty good week. For others, they’re happy that its the weekend. Unless you’re the Toronto Maple Leafs or a fan of them. Either way, come Saturday night, you’re going to have to drink off some of the night’s memories.

Sorry for the lack of a long spiel up top. I’ve been swamped with real work and radio/blog work. The good news is that the next episode of the radio show is next week. It’s on Tuesday at 6:30PM EDT on radio in London, ON or online here. The next episode is all about The Beatles and zombies (and the usual assorted stuff). It’s easily my favourite episode of the new season and is easily on my Top 10 list of favourite episodes. END_OF_DOCUMENT_TOKEN_TO_BE_REPLACED

The Humanoids is back from another week off. Not that anyone missed it, I’m sure. Anyway, there’s no real rhyme or reason to this week’s column. Maybe it’s getting back to what I originally envisioned the column as: A weekly look at some compelling persons, places, and things. And I won’t be talking about that balloon kid. After all, he’s dominated CNN since it happened and likely will for the next couple of months. I’d rather talk about anything else. Has anyone else noticed that long weekends are good at the time but mess up the rest of the week? I’ve found myself completely lost this week because I’m working four instead of five days. I thought yesterday was Friday even though I knew it wasn’t because I still had to finish writing this column. Oh, the fun that the tryptophan in the turkey has with you.

By the way, did you catch last week’s episode of The Lowdown radio show? I don’t blame you if you didn’t. It wasn’t one of our best efforts ever. From the news onward, it was pretty good though. The next episode is lining up to be pretty good. We’re taping it tonight. We’ll have a The Beatles: Rock Band review and some Halloween related stuff too. If all goes well, it should be an instant classic. END_OF_DOCUMENT_TOKEN_TO_BE_REPLACED

I’ve read at least a half-dozen mock drafts for tomorrow’s NHL Entry Draft. All of them are very clean and neat. No one will make any trades. No owners are going to meddle in draft choices and leave everyone scratching their heads. Well, let’s face it, we don’t live in the utopian world that most mock drafts exist in. That’s why I’ve decided to do a mock draft based not on the best players or who would fit best with a team but based on who is doing the drafting.

Since I know very little about the players in the draft, I’ll cap this at the top ten. That doesn’t mean there won’t be some interesting results. END_OF_DOCUMENT_TOKEN_TO_BE_REPLACED