It’s the first set of Wednesday links of 2011. Because she went to a New Year’s party, here’s Kim Kardashian.

Tiger clearly never treated his mistresses well because they’re all trying to cash in on their fame. (Deadspin)

A lesson for everyone stuck in dead-end jobs. This is a good way to go out and still get some severance. (Food Court Lunch)

After the jump, a Gus Johnson interview, a big addition to Tiger Woods PGA Tour 12, and Ovi’s SportsCenter commercial. END_OF_DOCUMENT_TOKEN_TO_BE_REPLACED

Making her SLO debut, here’s Salma Hayek. She’s in some movie opening this weekend that stars radio’s Dan Patrick in a cameo role.

So the Tiger Woods divorce is in the books (more or less). But if you thought other celebrity divorces were ridiculous, this one blows them all out of the water. (The Big Lead)

To help you avoid Tiger’s problem, might I suggest that you read some of the 1000 things that men don’t know about women. (Esquire)

The mystery of the history of obscene gestures in sports photos has been solved. You’ve got to go back over 100 years to find the first photographed bird. (Out of Bounds)

Some things will just spoil your day. Whether it’s a late post on The Lowdown Blog or your favourite sports team being taken down by the evil empire, there are some things you’d rather not have to put up with. Of course, spoilers are also those folks that tell you the ending of a movie or TV show before you see it. For example, in 1980, you were likely to be bludgeoned to death with a plastic lightsaber if you mentioned that Darth Vader was Luke’s father. We try to avoid doing the latter in this post while we talk a lot about the former in this post. I’ll spoil this post for you by saying that, as with most of my diatribes, it makes as much sense as the last sentence. END_OF_DOCUMENT_TOKEN_TO_BE_REPLACED

Seeing as just about every woman who was ever in the continental United States was rumoured to be one of Tiger’s hoes, I’m surprised that Cintia Dicker kept her name out of the scandal.

I don’t know if you’ve heard but Tiger Woods is back. His PR team didn’t do such a good job of handling the whole ho scandal but they didn’t have this handy scandal playbook. (With Leather)

And now you can not only divert scandal like Tiger but leave messages like him too with the Tiger Woods Soundboard. (Slate) Sadly, it’s no Gus Johnson Soundboard.

Need a proper exam tip for this April. The gang at LDU have you covered. (Lion’s Den U) Cheap plug: We’ve got exam tips on the next show. Hoping to finalize details to get that on LDU.

After the jump, KFC’s newest sandwich, the economics of sports, and One Shining Moment. END_OF_DOCUMENT_TOKEN_TO_BE_REPLACED

The whole world has gone mad! Not just March Mad but generally mad. People doing ridiculous things that would be extremely newsworthy if it wasn’t for a little basketball tournament that was known as March Madness. Celebrities have gone mad. Sport organization management has gone mad. Governments have gone made. And Gus Johnson has gone mad. Oh, Gus is always that amped up? Well, that’s why we love him.

Speaking of madness, cheap radio show/podcast plug: Our 50th show to air on radio is coming up on March 30th. That’s going to display our complete and utter madness. END_OF_DOCUMENT_TOKEN_TO_BE_REPLACED

It’s a late and abbreviated edition of The Humanoids this week. We’ve been busy with anything and everything Olympics related. While I admit that I was cynical coming to the Games, I’ve gotten swept up in Olympic fever and am prepping for the semi-final between our heroic Canadians and the dastardly Slovaks. They would be less dastardly and more dangerous if they were still Czechoslovakia but they broke up so it’s better for the rest of the hockey world. Anyway, most of today’s subjects are somehow related to Olympic hockey. Even the two that aren’t are sports folks because it’s a good week to be a sports fan… Unless you watch NBC. END_OF_DOCUMENT_TOKEN_TO_BE_REPLACED

Making her Lowdown Blog debut, it’s Scarlett Johansson. Has she actually done anything noteworthy since starring with cuz (Bill) in Lost in Translation?

Your Olympic experiment of the day: How much more interesting is skeleton after drinking six beers? This is my sort of science. (MacLean’s)

This past Monday was the 30th anniversary of the Miracle on Ice. In honour of that, here’s 10 facts you might not have known about the game and team. (Joe Posnanski)

After the jump, more Tiger insanity, some baseball links, and NBC gets something right. END_OF_DOCUMENT_TOKEN_TO_BE_REPLACED

This is apparently the worst Winter Olympic Games in the history of the world if you ask the British press. But they’re a fickle bunch so I pay them little to no attention. I think these are a pretty Olympic Games. Of course, I’m watching them through maple leaf shaped glasses. That doesn’t mean that these games are perfect. There are some issues and people overshadowing what should be the greatest games ever. And, no, I don’t mean the broken cauldron. That was fairly embarrassing, though. Let’s blame that on the Newfies. END_OF_DOCUMENT_TOKEN_TO_BE_REPLACED

Making her blog debut is Keeley Hazell, one of Britain’s finer exports.

On the one hand, I agree that a social media certification is odd. On the other hand, if it opens me another door… (The Future Buzz)

Again, on the one hand, I like that somebody’s finally un-fucked up Sony’s fucked up decision to remove PS2 compatibility from the PS3. On the other hand, I’d likely fuck up trying this. (BBC) Also figures that someone would figure this out after I invest in a far number of PS3 games.

After the jump, Brett Favre, Tiger Woods, both at the same time, and a Grand Fork-up. END_OF_DOCUMENT_TOKEN_TO_BE_REPLACED 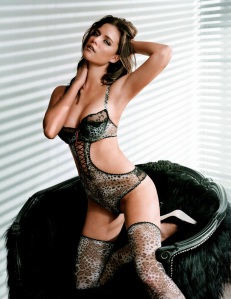 America may have won the battle last night, but Kim Cloutier proves that we’ve won the war.

We have to come up with a new name for athletes whose popularity transcends sports. The entertainment media is just all over some of these folks. For example, Elin Nordegren is being followed by the paparazzi in France. The good news for her is that she’s doing quite well for herself spending Tiger’s money. (People)

In an example of “opposites attract” a heavyweight boxing champion is dating a very short actress who is most famous for playing a character that gets beat up rather than doing the beating. (The Big Lead) (I haven’t seen Heroes for about two seasons now and I don’t care if anything’s changed.)

Naturally, a celebthletes (does that work?) intro would have to include Tiger Woods. Fortunately, legendary writer Buzz Bissinger has a piece looking inside the head and life of Tiger. (Vanity Fair)

After the jump, even more Tiger Woods, Silvio’s up to similar tricks, and this year’s awesome New Year’s stunt. END_OF_DOCUMENT_TOKEN_TO_BE_REPLACED