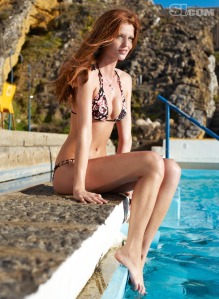 Seeing as just about every woman who was ever in the continental United States was rumoured to be one of Tiger’s hoes, I’m surprised that Cintia Dicker kept her name out of the scandal.

I don’t know if you’ve heard but Tiger Woods is back. His PR team didn’t do such a good job of handling the whole ho scandal but they didn’t have this handy scandal playbook. (With Leather)

And now you can not only divert scandal like Tiger but leave messages like him too with the Tiger Woods Soundboard. (Slate) Sadly, it’s no Gus Johnson Soundboard.

Need a proper exam tip for this April. The gang at LDU have you covered. (Lion’s Den U) Cheap plug: We’ve got exam tips on the next show. Hoping to finalize details to get that on LDU.

After the jump, KFC’s newest sandwich, the economics of sports, and One Shining Moment.

This has to be the world’s greatest April Fools joke. KFC is launching the deadliest sandwich ever in 5 days. (Consumerist)

Baseball is back. And so is a lack of editorial work at USA Today. Well, they put a lot of work into their MLB salary breakdown but then say salaries are down. They’re actually up. Anyway, here’s a breakdown of every team’s total salary and every player’s annual paycheque. (USA Today)

Speaking of the economics of sports, the St. Louis Rams just cut Marc Bulger. I guess that means that they’re taking Sam Bradford with the first pick of the draft. It’s too bad that it’s the least valuable pick in the whole draft. (New York Times)

Some bloke in Lincolnshire has come up with the ultimate solution to dumbass tailgaters: Flamethrowers! (Top Gear)

Canada has finally hopped on the fantasy football bandwagon. It’s too bad that the new CFL fantasy game has an awful name. (Regina Leader-Post)

Want to know why all your favourite shows seem to be on cable now? That’s because cable puts an emphasis on quality over viewer quantity. (New York Times)

Today’s photo gallery is a look at people who are enjoying the company of nobody but their iPad. (Lonely People with iPads)

It’s not a photo gallery but it’s gotta be the funniest sign ever. A bar has a special giveaway for the NHL Playoffs. (TweetPhoto)

The general consensus is that this year’s One Shining Moment really sucked. Too much Jennifer Hudson and not enough highlights. Fortunately, Guyism has solved our problems with Luther Vandross.