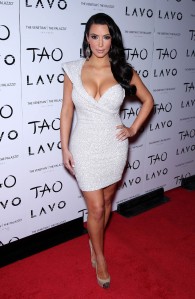 It’s the first set of Wednesday links of 2011. Because she went to a New Year’s party, here’s Kim Kardashian.

Tiger clearly never treated his mistresses well because they’re all trying to cash in on their fame. (Deadspin)

A lesson for everyone stuck in dead-end jobs. This is a good way to go out and still get some severance. (Food Court Lunch)

After the jump, a Gus Johnson interview, a big addition to Tiger Woods PGA Tour 12, and Ovi’s SportsCenter commercial.

Awful Announcing’s top announcer of 2010 was the amazing Gus Johnson. That meant they held a Q & A with him and linked to some of his best moments. (Awful Announcing)

One of the bigger points of contention of the Winter Classic wasn’t the weather but NBC’s camera work as they experimented with the cable cam and the airplane cam. (Puck Daddy)

The NHL is spending the month of January unveiling those Stan Lee created superheroes based on NHL teams. Here are three superhero concepts that Lee and Marvel won’t be putting out but should. (Tauntr)

Poor Hank Baskett. He screwed up the onside kick in the Super Bowl. Then his wife has a sex tape released. Now she wants a post-nup to protect her sex tape earnings. (With Leather)

Here’s an important link for you. It’s a guide to the open internet. This might be an issue in the not too distant future. (The Open Internet)

Here’s a link that I’d say was misappropriated from Jackie’s entertainment links but he’d never run anything tangentially related to Sex And The City. It’s the 11 worst movie lines from 2010. (The Shzinit)

And let’s bounce back from that with the top game show moments of 2010. Yes, that embarrassing Fox moment is on it. So is that Family Feud moment. (Gawker TV)

Let’s go to the photo galleries. First, Roger Ebert digs up these old date tips for women. A couple of these are actually still applicable today. (Roger Ebert’s Journal)

I call this one Behind the Burgers: The Ronald McDonald Story. (Top Cultured)

For the second linkdump running, I’ve got a link that would have been better served in the LNLO. Instead, I’ve got to drop it here. It’s the ten best cars to have sex in. (Jalopnik)

And before the YouTubbery, here is one man’s look underneath New York City. (Gizmodo)

Rejoice Michigan fans! Rich Rod is gone! Here’s a hypothetical look at how his dismissal went.

SportsCenter has a winner with their latest ad. It stars Alex Ovechkin and Simeon Varlamov.