I kind of wanted to title today’s linkdump with a bit of a Judge Dredd reference but this title fit best. I’ve finally caught up on my back issues of Judge Dredd. Now it’s to catch up on Justice League and Superman. I don’t even have that big a file at my local comic book shop and I’m always behind. Some people order in like five times the number of comics I do. How can they pull that off?

Anyway, it’s Sunday which means that it’s time for the links. Something like nine months after being named Maxim’s hottest woman of 2014, we finally have Candice Swanepoel’s Hot 100 shoot. It’s too bad that there’s only one photo that’s remotely SFW.

When the chief economist for America’s biggest conservative think tank can’t come up with an actual fact to back up his claims that the Affordable Care Act has been a failure, isn’t it time to give up that fight? Then again, lying to electorate seems to work so why the hell not. (Daily Intelligencer)

Omar Abdel Hamid El-Hussein went from petty criminal to shooter in a short period of time. What happened to him to cause that change? (Time)

END_OF_DOCUMENT_TOKEN_TO_BE_REPLACED

In one corner is the AskMen’s most desirable woman, among several dozen other titles on Game of Thrones, Emilia Clarke. In the second corner is FHM’s sexiest woman in the world, and twice Man Lab Showdown champion, Jennifer Lawrence. And, finally, the folks at Maxim were able to sign Candice Swanepoel to a photo shoot as their hottest woman in the world. That’s better than they usually do.

Hit the jump for the photos and poll.

END_OF_DOCUMENT_TOKEN_TO_BE_REPLACED 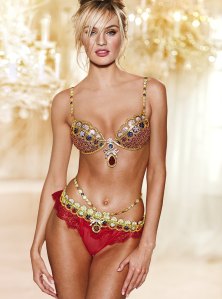 Happy Sunday, one and all. It’s time for the links. Or some links any way. I’ve been having bad luck finding good links that I like lately. Hopefully I can make up for that with Candice Swanepoel in Victoria Secret’s $10 million fantasy bra. Three questions: 1) Who thinks multi-million dollar lingerie is a good idea? 2) What happens if they break it? And 3) Can I get one jewel off it? Just one?

Daisy Coleman, the Maryville rape victim we mentioned earlier this week, wrote about her experience in her own words. (xoJane)

Rob Ford may think that he was done wrong by the press breaking and covering the crack scandal story but the Ontario Press Council says that the media has been doing their job correctly. (CBC News)

How did Jeff Bezos turn Amazon into the most powerful store in the world? A new book is trying to answer that questions. (Businessweek)

END_OF_DOCUMENT_TOKEN_TO_BE_REPLACED

It’s the middle of the week and we’re less than a week from the Presidential Election. But today’s Halloween so we’ll get through that first. Let’s kick off with Candice Swanepoel dressed as a stewardess. If only all airline stewardesses looked like that… I mean, apart from the ones on Virgin Airlines.

The New York Times editorial board has endorsed Barack Obama as the best choice for President of the United States. If the biggest newspaper in America endorses him, that should tell you something. (New York Times)

The Romney campaign team is dispatching a team of poll watchers to Wisconsin. However, the voting info they gave them for Wisconsin is largely false and written to suppress voting. (Think Progress)

After the jump, Romney and Sandy, some special Halloween polling and the greatest horror movie quotes. END_OF_DOCUMENT_TOKEN_TO_BE_REPLACED

The first US Presidential campaign debate is tonight. I won’t be watching because I’m starting to get electioned out and we’re still a month away from voting day. Remember, folks, voter fatigue is part of the Romney plan so make sure to vote Obama on November 6th. In the meantime, let’s start today’s links with Candice Swanepoel.

The Republicans consider the Affordable Care Act (AKA Obamacare) the root of all evil. However, seeing as President Obama didn’t switch the health care system to single-payer, an op-ed suggests that maybe Obamacare is something the Tea Party should be happy about. (New York Times)

“Choose your own” is a genre usually limited to books and video games. However, conservative political pundits are living in a world of choose you own political reality. (Politico)

Let’s take a short break from politics. This is a great story by a man who was tormented off the internet before finally meeting and confronting his troll. (The Guardian)

After the jump, unskewing the polls (by skewing them in favour of your candidate), more insight on the BioWare resignations and The Simpsons’ take on the election. END_OF_DOCUMENT_TOKEN_TO_BE_REPLACED

Shockingly, I had enough time away from Mass Effect 3 Extended Cut to put together a linkdump for today. Anyway, here’s Candice Swanepoel who regular readers are familiar with.

Not a lot of people seemed to like the premiere of Aaron Sorkin’s The Newsroom. I did. So did legendary news anchor Dan Rather. (Gawker)

While some have described The Newsroom as a love letter to the news industry, it could also be called a map for CNN to return to success. (New York Times)

The return of Sorkin also gives us a chance to look back at his original TV show, Sports Night. (The New Yorker)

After the jump, what kind of Canadian are you, a war reporter profiles Charlie Sheen and an epic Mike Tyson interview. END_OF_DOCUMENT_TOKEN_TO_BE_REPLACED

Did I just drop a WKRP in Cincinnati joke in the title of this post? That just happened. Also happening in Candice Swanepoel.

Sun News Network personality David Menzies is accusing Brian Burke of supporting his son’s You Can Play charity, which is trying to get homophobia out of hockey, as a PR boost. Words can not describe how low Menzies is but most of those words would describe him as sub-human. (Pension Plan Puppets)

A top Republican pollster says that the GOP must “evolve” on same-sex marriage and other gay issues or the party will cease to be relevant. (The Daily Beast)

After the jump, the history of Animaniacs, a breakthrough in quantum teleportation and call Harvard baseball… maybe. END_OF_DOCUMENT_TOKEN_TO_BE_REPLACED

It’s our last linkdump before Christmas. We’ll be around through the weekend to keep your time off covered. In the meanwhile, here’s Candice Swanepoel in her Christmas finest.

A crazy conservative senator thinks Canada should drop the beaver for the polar bear as the national animal. (BBC)

ESPN’s Craig James has left the mothership to run for the US Senate. Apparently, the last people to find out were the ESPN news staff. (Deadspin)

Still stuck for Christmas gift ideas? You might want to avoid these 25 ideas. (Holy Taco)

It’s Sunday and we have a new look on the blog. It’s also the day before Halloween. So, naturally, we’ve got someone dressed up in a costume as we’re wont to do on the link-off before Halloween. Today, it’s Candice Swanepoel dressed as the devil. Cliché yet amazing.

Did you know there’s such a thing as professional mini-golf? There are professional tours, major championships and even The Masters. (The Daily)

The NBA lockout isn’t quite as over as the media was hoping it would be at this point. However, that doesn’t mean that there aren’t basketball stories coming out. A new study has shown that there is such a thing as the hot hand in basketball. (Mind Hacks)

After the jump, Kim Kardashian’s marriage may be a complete sham, Sherlock Holmes is making a comeback and a Halloween light show. END_OF_DOCUMENT_TOKEN_TO_BE_REPLACED

If it’s Sunday, then it’s time for another set of our Sunday morning links. Let’s kick off with Candice Swanepoel who’s trying out of of Victoria’s Secret’s new workout attire. Insert easy workout joke here.

There’s bad breakups and then there’s this story from New York. A man decided to get revenge on his ex by framing her in a series of armed robberies. He almost got away with it too. (New York Times)

Good news for Canadians: Rob Faulds will be at the London Olympics and Rogers Sportsnet and TSN are putting their top anchors head-to-head in the morning. The bad news: Gord Miller is calling Track and Field. So much for watching the Olympics next year. (Fang’s Bites)

And speaking of failed broadcasting deals, the BBC is splitting F1 coverage with Sky Sports next year. Suffice to say, it’s not going over well. (Joe Saward’s Grand Prix Blog)

After the jump, why it’s alright to like the CFL, how Twitter plays you and Harry Potter and the Rom Com. END_OF_DOCUMENT_TOKEN_TO_BE_REPLACED