I’m not sure if I ever mentioned it before but I was a pretty good curler in high school. Well, good is a relative term. I could make an Olympic caliber shot if the moment called for it once out of ten or twenty times. That’s the difference between your beer leaguer and your Olympic star. The guy at the club can make the perfect shot one out of 20 times. The guy you’re watching on TV will do it 18 or 19 times out of 20.

Anyway, Smarter Every Day has a handy infographic and video explaining the basics of curling and the science behind curling a stone. It seems so simple when you watch it on TV. In practice, not so much.

END_OF_DOCUMENT_TOKEN_TO_BE_REPLACED

We don’t like thinking about the inevitable end of life but we’re on a non-stop course for death. Some of these causes of death are somewhat preventable or manageable if you’re proactive. Others could just happen in a flash.

So what are the most common causes of death and which are most common among people your age? We have a handy (or is it really scary) infographic to help you predict your end.

END_OF_DOCUMENT_TOKEN_TO_BE_REPLACED

I’m working on a couple of video games post for the next couple of days, including a fun little column about the gaming industry’s obsession with copying Call of Duty. For now, it’s the middle of the week links. Let’s start off with celebrity chef Giada de Laurentiis.

I know that EA is the twice-defending Worst Company in America but the Bank of America really should have won. (The Consumerist)

Dick Cheney thinks that Edward Snowden is a traitor. Says the man who led America into a fictitious war. (Politicus USA)

Bill Nye has gone from the Science Guy to the Science Warrior. He’s not just teaching kids about science but people who should know better like the media and politicians. (New York Times)

END_OF_DOCUMENT_TOKEN_TO_BE_REPLACED

There is little that strike fear in the hearts of men like the potential of a testicular injury. Can you blame them? Being hit in their gentleman’s parts is more painful than getting hit anywhere else on their body. But what exactly makes a ball shot more painful than your stomach or your face? Today, we look at the science of the pain of being hit in the testicles. END_OF_DOCUMENT_TOKEN_TO_BE_REPLACED

I don’t know if you’ve noticed but it’s fairly warm outside right now. That’s what happens when you’re in the middle of the summer and the thermometer is doing its best to confirm global warming. Since it’s so warm, it’s important for you to know how and why to keep yourself hydrated. Fortunately for you, we have that covered with this infographic. END_OF_DOCUMENT_TOKEN_TO_BE_REPLACED

For the longest while, I never understood what TED was. Most of what I gleamed from Twitter was that it was some sort of lecture series about social media and technology. However, there’s so much more to it that I’m disappointed I didn’t discover it sooner. So for today’s instalment of our Best of the Interweb series, it’s a look at some of the best TED talks on the internet. END_OF_DOCUMENT_TOKEN_TO_BE_REPLACED

I’m sure everyone’s parents and teachers said that video games would rot their minds. While I’m also sure that perception hasn’t changed and won’t any time soon, science is doing its damnedest to prove otherwise. Studies show that being a gamer makes you smarter and a better person than non-gamers. END_OF_DOCUMENT_TOKEN_TO_BE_REPLACED

We’ve loaded up on interesting and high-quality articles for today’s linkdump. I’m not sure there’s one here that you want to skip. Anyway, let’s balance that out with Sandra Vergara (Sofia’s younger sister) who is in Fright Night which you probably want to skip.

Here’s this year’s absolute must-read story: It’s an insider look at the mission to kill Osama bin Laden from the planning phases through to the mission. (New Yorker)

Good news for people like me who are often accused of being alcoholics: About two-thirds of people in a study say they drink to cope with stress. See, I don’t have a problem. I’m just an average guy. (Daily Telegraph)

Spoiler alert for the next season of Two And A Half Men: Chuck Lorre is a fucking idiot. Rather than prove he’s the bigger man by letting Charlie Sheen’s character drift off and hope he’d come back for a highly rated comeback episode, he’s going to kill off Sheen’s character. Chuck, the cancellation bear is coming for you! (Deadline)

For once, the Man Lab is here to do some practical science stuff for you guys. Today, we take a look at the science of hangovers. At first glance, it seems as simple as drink too much and you get a pounding headache in the morning. But that first sip of alcohol starts you on a slippery slope that drags you toward a rough next morning.

So let’s take a look at why who you wake up to isn’t the only thing you regret after a night out. END_OF_DOCUMENT_TOKEN_TO_BE_REPLACED 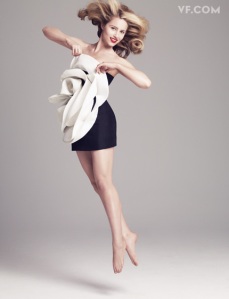 Not sure to lead off with so here’s Glee star Dianna Agron.

Wayne Gretzky was never considered a tough, physical NHLer but put him in a poker game with Michael Jordan and he has bigger balls than the whole of the NHL combined. He gave MJ the business over being a cheap bastard for undertipping a waitress. (Deadspin)

Chicago White Sox manager Ozzie Guillen recently joked on Twitter that he should run for mayor of Chicago. Some folks thought it was such a great idea that campaign posters have already been designed. (Tauntr)

Google’s big announcement of the week was that they are adding an “instant” (as you type) search function. However, that’s going to make a few searches unnecessarily embarrassing and will give parents a lot of things to explain to the kids. (Gawker)

After the jump, a free NFL video game, the growing legend of 20 Cent Kane and it’s still a trap. END_OF_DOCUMENT_TOKEN_TO_BE_REPLACED