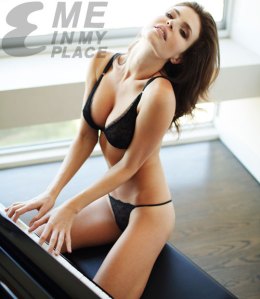 Halloween’s over for another year and it was a bit more interesting than usual. Anyway, let’s kick off the first linkdump written on the new layout with new Guess model Julia Lescova.

The 1% might say that they’ve earned their wealth but they sure aren’t doing anything to earn themselves any sympathy. For example, a law firm’s Halloween party featured all employees dressed as the recently foreclosed. (New York Times)

One of the best Halloween traditions is the annual Simpsons Treehouse of Horrors special. Here is a ranking of all segments over the last 22 years. (SplitSider) Really, any from Treehouse V could’ve been #1 so this is one of the seldom seen good choices for #1.

Shaq has a new book coming out soon. Some of the released excerpts explain why he and Kobe hate each other. (Deadspin)

After the jump, Kim and Kris are no more, more leftover Halloween links and the FNL Emmy trailer.

ESPN is often criticized for making the news as much as breaking it. It looks like they’re doing both again with the recent rash of college football conference realignment stories. (USA Today)

Kim and Kris are no more… Much to no one’s surprise. What was surprising was the awesomeness of this candlelight vigil held in honour of the failed marriage. (With Leather)

The Detroit Lions are getting a reputation as a dirty team. My boys should embrace this and become the bad boys of the NFL… Then kill Aaron Rodgers on Thanksgiving! (The Big Lead)

Apropos of absolutely nothing, the campaign for Hoth to replace Sochi as the host of the 2014 Winter Olympics. Yes, that Hoth. (Hoth 2014)

The annual NHL Halloween party wasn’t without its interesting moments… Especially if you ran into Chris Pronger. (Down Goes Brown)

Speaking of Halloween, it seems as though peanut-related candies aren’t popular at my place of employment. That means that this hierarchy of candy will be posted in my cubicle from now on. (Boing Boing)

Remember how that Kindle of yours was supposed to be lighter than carrying books around? Well it gains weight every time you download an e-book. (Gizmodo)

Uncharted 3 came out yesterday. Main character Nathan Drake is often considered to be the video game version of Indiana Jones. But there was a virtual Indy before Drake. His name was Pitfall Harry. (Kotaku)

Seeing as there aren’t real problems with the world that need to be studied, some academic types examined The Jersey Shore. (Warming Glow)

There were some controversial Halloween costumes that popped up this weekend but there were also come funny ones. Here’s a photo gallery of 25 of the funniest from the weekend. (Twisted Sifter)

Or if you were looking for Halloween frights, you’ll have to make do with the eight creepiest video game glitches. (Cracked)

I missed this last week but it’s the Emmy Awards trailer for Friday Night Lights.

The Muppets were on Monday Night Raw this week. They even got in on the action when Beaker provided the assist during one match.