It’s been almost sixteen months since we last had a Man Lab Showdown and I’m not sure why because the Showdown is consistently your favourite post. So to mark the release of the 50th anniversary issue of the Sports Illustrated Swimsuit Issue and the return of the Showdown, I thought I’d do something special.

In one corner is the woman I said was my dark horse for this year’s cover and fastest growing star in modelling over the last year, Nina Agdal. In the other corner, a Victoria’s Secret Angel recruited to SI, Lily Aldridge. And in the third corner, a long-time Swimsuit Issue veteran who finally got her shot at the cover, Chrissy Teigen. That’s right, it’s our first ever Man Lab Showdown three-way dance to find the ultimate 50th Anniversary cover girl.

More photos and the poll after the jump.
END_OF_DOCUMENT_TOKEN_TO_BE_REPLACED

It’s Wednesday which means it’s time for links. It also means that we’re seven days from unveiling our SI Swimsuit Issue cover odds list. Maybe I should get started on that… Okay, while I do that, here are the links and here is the return of Lily Aldridge.

As he heads into his second four-year term as President of the United States, TNR interviews Barack Obama about his plans for the next four years. (New Republic)

In that TNR interview, the POTUS says that the Republicans won’t change their obstructionist ways until they are made to pay the price for being obstructionist. You know, he’s right. (Washington Post)

After the jump, the history of Deadspin, a profile on one of BioWare’s exiled bosses and an epic trombone quartet. END_OF_DOCUMENT_TOKEN_TO_BE_REPLACED

In order to further our ever expanding agenda to help men, we’re introducing a linkdump to our Man Lab series. In the MLLO, we’re going to link to stories that will give men advice they need. And let’s start our first Man Lab linkdump with Lily Aldridge who definitely wouldn’t cause any cold feet dressed like that.

Part of the job of the Man Lab is to help you figure out women. So that’s why we dug up this handy Woman to English dictionary. (Match)

After the jump, what pets mean, expert relationship advice and how men erase CDs. END_OF_DOCUMENT_TOKEN_TO_BE_REPLACED 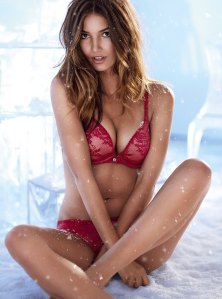 It may be cold outside but Victoria’s Secret Angel Lily Aldridge should warm up the freezing Canadian winter.

Here’s the sports media coup of the year. Fox leaves the cameras on overnight and catches the Metrodome roof collapse. Here’s the story behind the video. (USA Today)

Speaking of Favre related things, even though his streak ended, that isn’t the big Dongslinger story of the week. He could be facing a lawsuit from Jenn Sterger. (Pro Football Talk)

Ever wonder what it’s like to be a Christmas tree salesman in New York City? Probably not but this story of a tree-selling family is still a good read. (Los Angeles Times)

After the jump, scads of hockey links, the first gameplay footage of Uncharted 3, and the ultimate F1 2010 highlight package. END_OF_DOCUMENT_TOKEN_TO_BE_REPLACED