It’s a slow week here since everyone is off on holidays. Today is Boxing Day, which means everyone is lined up at the malls looking for a deal. In fact, I’m heading out to grab something, so I’ll keep this one brief. For those that do not plan on heading out to the crowded shopping malls, here’s something for you to read! Kicking this off is Olivia Wilde. I swear these photoshoots are reminding me to go check out shows that I generally miss over the year. Alright, I’m off to grab some House DVDs! Yes I choose to watch Chuck live, so House tends to be on the back burner.

After the jump, brief tidbits on movies, the Home Alone Twitter Project and Glee Flashmob!

I want to see a Tom and Jerry movie! Please make it happen Dan Lin! (Slashfilm)

District 9 was a fun movie. The main highlight of the film were the ridiculously powerful alien weapons that led to awesome cartoony blast-splat moments. For those interested, here is a video documenting the creation of these weapons. (Slashfilm)

I love it when celebrities interview each other. In this case, it’s two great filmmakers. Here’s Peter Jackson interviewing James Cameron. Actually scrap that, the interview progressed into a discussion about filmmaking. It’s a good read. (Newsweek)

So after spending almost 3 hours watching Avatar, a big sci-fi movie filled with messages on the environment, greed and war yet all this guy can think of is that James Cameron is racist. Really? (Telegraph) Dude, what are you smoking?

Remember kids, drugs are bad for you. Anyway, the MPAA are at it again. This time they slap an R rating to the flick It’s Complicated because it featured marijuana use. Yes, I’m sure having 60 year olds smoke pot will inspire teens to do the same thing because it’ll be ‘hip’. Yes, doing drugs is bad, but it can’t be worse than lopping people’s limbs off right? (NY Times)

Speaking of movie awards, the film critics are picking their top movies of the year and it looks like The Hurt Locker might be the front runner. (AICN)

RT’s guide to best films of the decade. (Rotten Tomatoes)

Last week they released a red band clip for the movie Kick-Ass highlighting some fine parenting skills from Nicholas Cage. I have a new found respect for that man for doing this movie. (Rotten Tomatoes). Well, they just released a new red-band trailer focusing on one of the characters Hit Girl. I must say, it’s bloody awesome. Is it April 2010 already? (Empire)

I’m a huge fan of Home Alone. It’s one of those flicks I watch every year during the holidays. Anyway, Christmas might be over, but it’s never too late to check out the Home Alone Twitter Project. Imagine the characters from the flick living in an alternate timeline when they would have access to Twitter. Yes, it would be awesome indeed. (@HATProject) And don’t forget to check the individual character Twitter pages!

I was going to say “I pity the fool that stops Mr. T from appearing in the A-Team remake”, but it turns out he decided not to take up a cameo appearance himself. *sigh. I’m disappointed, but I respect the man’s decision. (Latino Review)

Rock Band is going country!!! Steve is gonna love this because he gets to rock along to Shania Twain! (IGN) 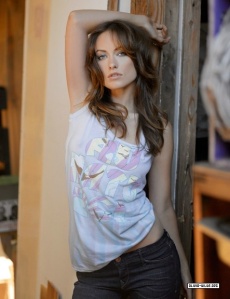 Olivia Wilde will be appearing in the highly anticipated film Tron Legacy, which is due for release next December. I would say it would be the top geek film I’m looking forward to next year along with Iron Man 2. Anyway, here’s a list of other sequels that you may be interested to check out next year. (Film.com)

The folks at io9 decided to take a look at the advances in the virtual world by comparing the Tron lightcycles in 1983 to the one that is featured in 2010’s Tron Legacy. (io9)

Kevin Smith explains why he changed the title of his latest flick to Cop Out. (Collider)

Oh get your first look at A Couple of Dicks Cop Out starring Bruce Willis and Tracy Morgan. I was really looking forward to this flick, but this doesn’t look as funny as I hoped it would be. Perhaps the red band trailer will be a lot better… whenever that comes out.

Glee is a moderate ratings success in North America, but the show does have a strong following. In fact it is taking this world by storm! Check out the Glee Flashmob that took place in Italy.

Wouldn’t it be awesome if Santa was a superhero? He would be taking down bad guys and delivering toys to kids. Now that’s badass. Well here is a neat trailer mashup between those superhero flicks and… well… those Tim Allen Santa Claus flicks.

One thought on “Entertainment Link-Off: Shop Til You Drop”