We had a video a while back showing that Megan Fox was a CGI creation. Definitely the greatest use of advanced technology ever.

I wasn’t kidding when I said David Beckham was picking fights in his return to the LA Galaxy. A British tabloid hired a lip reader to prove that I was right. (News of the World)

How many times do I have to tell you that creating more advanced robots will only lead to disaster? A Japanese doom-bringer has created robots to throw baseballs and swing a bat. I can’t see how these skills could be used to take over mankind. (ABC/AP)

And I’m not the only one that thinks robots are going to kill us all. Even real scientists think that we’re creating mechanical monstrosities that will kill us all. (New York Times)

After the jump more on Erin Andrews, trouble for stick men and the greatest hole-in-one ever. END_OF_DOCUMENT_TOKEN_TO_BE_REPLACED

END_OF_DOCUMENT_TOKEN_TO_BE_REPLACED

Another week, another linkdump. This is Megan Fox who has a movie coming out next week. If memory serves, it’s called Michael Bay’s Big Explosions and Megan Fox In Revealing Outfits 2. After the jump, I was going to show Artie Lange on Joe Buck Live. Instead, we’ll have to settle for more Megan Fox.

A Ferrari Formula One concept for the upcoming Hoth Grand Prix. No word on if can outrun a Tauntaun or fen off a Wampa. (Jalopnik)

The Stanley Cup Finals had the most viewers on US network television on Friday night with 7.5 million viewers. That’s especially noteworthy because at midnight before the game, US TV stations made the big switch to digital signals. (New York Times)

Speaking of the Finals, between Bettman and NBC setting up the Red Wings for failure, people forgot how banged up Detroit was. The fact that Lidstrom could even play in the Finals with his injury should show how much of a pansy Crosby was for not playing Game 7. (Detroit Free Press)

An anti-competition in the ruling in Europe means that Microsoft can’t force IE on users buying Windows 7. They will make it “easy to install” for users and manufacturers. That way, you can download Chrome or Firefox. (BBC)

Joe Posnanski wrote one of the great infomercial analyses of all time. He recently took a look at the Comfort Wipe. God help America. (Joe Posnanski)

If your crazy enough to get a tattoo, here’s a helpful graphic to tell what your tattoo says about you. (Tasty Booze)

UPDATE: There was a bit of controversy over that last link. Cracked also had a tattoo guide, some folks thought that the two images were similar and the shit hit the fan. Here’s that link. (Cracked)

Only in Canada: A murder escapes a prison by walking off the property. (Toronto Star)

Susan Boyle may not have won Britain’s Got Talent but don’t tell her agent that. He’s set her appearance fees so high that he can retire on his cut by the end of the year. (Daily Telegraph)

Parking in Toledo is a fineable offence. Well, only if you park in your own driveway. (Globe & Mail)

Yankees aren’t the only things that live in the Bronx. You can find snakes too if you just close your eyes. (New York Post)

Ukraine is at risk of losing most of its games in Euro 2012. That’s what happens when communists get in the way of major construction project. (BBC) END_OF_DOCUMENT_TOKEN_TO_BE_REPLACED 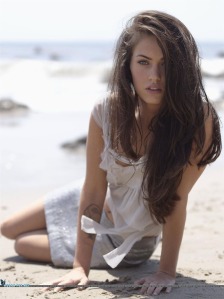 I just have a picture of Megan Fox here for no apparent reason.  Actually on second thought, there is a reason.  Michael Bay has released new Transformers: Revenge of the Fallen footage today and fanboys everywhere are celebrating (including me!).  Check out the video after the jump.

Who said you needed to be hired at a restaurant in order to make money as a waiter? (Toronto Star)

Over in Conover, North Carolina, two Dominos employees decided to videotape various unsanitary acts while working at one of the stores.  Clearly they didn’t think this through.  The company has decided to fire the two employees and file a criminal complaints against them.  Those poor customers… now they know how ass tastes like… (ABC News)

Speaking of someone that knows what ass tastes like, a strip search was performed on a man charged with drug possession and the police officer found a bag with a white powdery substance in his rectum.  They guy grabbed the bag from the officer and stuffed it into his mouth!  You know you’re an addict when… (Olivia Munn)

A man in Waco, Texas was stabbed twice because he farted.  I supposed he needed a few extra openings to let the gas out. (Metro)

A man committed suicide in the middle of a late night screening of Watchmen.  I never knew the movie was that bad! (Slashfilm)

A British man killed his partner of 30 years after she became obsessed with Grand Theft Auto!  Hey World of Warcraft gamers, I think you should be concerned about your personal safety too! (Daily Mail)