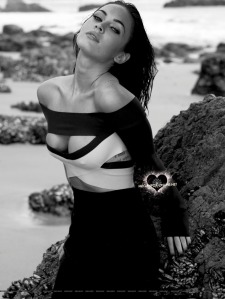 When in doubt, go with Megan Fox. Can you blame me?

Also, when in doubt, blame the cat. For example, a Florida man tried to use his can as a scape… cat for downloading child pornography. (The Guardian)

And when in doubt, blame Dale Earnhardt Jr. A man in what was described as Dale Jr. hat robbed a New Jersey bank. I think they’ve got the wrong man because it’s clearly a Dale Jarrett hat. Either way, I’m wearing my wallet on a chain today. (All Left Turns)

After the jump, athlete failures, Nintendo failure, and vintage ECW with a chair throwing win.

Did you know that there was a study into the science of one-night stands? Shockingly, it has nothing to do with how much you have to drink. (Time)

If this wasn’t filed under “This Is Not A Joke,” I would have assumed that this was a joke. Nintendo’s latest motion controller is a riding controller. (Kotaku) Speaking of video games, I just posted my review of EA Sport’s NCAA Football 10. Check it out here.

Athlete Endorsement Failure: Jennie Finch is pitching a product for Pro Mounds. (Business Journal) The company name couldn’t be some sort of inside joke about her SI Swimsuit spread, could it? (SI Vault)

Good News: Rawlings has finally developed a batting helmet that can stop 100 MPH fastballs. Bad News: Players would rather be fashionable than safe. Would “Alex Rodriguez Syndrome” be a good name for it? Jeter maybe? (New York Times)

Heading to Michigan International Speedway tomorrow? Find out where to go and what to do at the track. (Laidback Racing) Here’s a preview of Sunday afternoon’s Sprint Cup race at MIS. (Racing Junky) Here’s the starting lineup. (Jayski) And a look the race to the Chase for the Sprint Cup. (USA Today)

In other car news, Opel might soon become Canadian. Magna has ironed out the wrinkles in its bid. Hopefully this means we’ll be getting a Top Gear Canada soon. I’d be up to host it… (CBC)

In other Michigan news, Gitmo might be getting replaced by a maximum-security facility in Michigan. (New York Times)

Today’s photo gallery features 20 of the dumbest and most ridiculous tattoos that have ever been etched into people. Shockingly, Hayden Panettiere’s misspelled tattoo is not in this gallery. (Daily Telegraph)

Programming Notes: Because there is a CFL game this afternoon, this post won’t be followed by the CFL Weekly Recap. Look for that on Monday. A recap of my trip to Michigan International Speedway is coming sometime this week.

This video is among the most famous in the history of ECW (not that farce that is WWE’s ECW). E-C-Dub! E-C-Dub!

One thought on “Saturday Link-Off: The Blame Game”