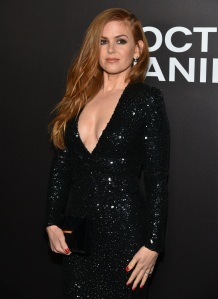 So the election is over and life is somewhat moving on as people attempt to mount some sort of resistance to the President-elect. It sounds very Star Wars. Perhaps like Vietnam inspired George Lucas, who, apart from Oliver Stone, will be inspired by this election and presidency.

Anyway, it’s Sunday which means that we’re here to do the links. Let’s kick off with Isla Fisher.

There has been a lot of talk about fake news since the election but for a good reason. More people read fake news on Facebook than real news stories. (Vox)

It might be time to start panicking but fracking is causing earthquakes in Canada. (New York Times)

END_OF_DOCUMENT_TOKEN_TO_BE_REPLACED

Change in programming today. I’m here and Jackie will be back tomorrow. Anyway, Bruno may have been an absolute box office bomb but Isla Fisher is the only reason that SBC still wins.

We all know the Monopoly rule: Go directly to jail. Do not pass go. Do not collect $200. Well a man won the Canadian lottery and was able to collect $4.4 million. Then he went directly to jail without passing go. (CBC)

NFL and Seattle Seahawks WR (and charter member of the All-Name Team) T.J. Houshmadzadeh is pissed at EA Sports. He’s boycotting Madden 10 because they only gave him a 91 overall rating. (Kotaku)

Jay Mariotti is what highly educated people would call an asshole. He decided to use the Erin Andrews incident as a reason to run-down the blogosphere. Ironic since he’s a blogger for Fanhouse. Anyway, I’ll leave this in the hands of the much more eloquent Andrew Bucholtz. (Sporting Madness)

Or you could read this line-by-line breakdown of Mariotti’s stupidity by the one and only Weed Against Speed. (Sportress of Blogitude)