From talking to people around town, I’m probably a week late with this year’s cocktail power rankings. So if your first Christmas / “holiday” party was last weekend, hopefully you just referred to last year’s list. The classics don’t really go out of style. It’s just that some are more in vogue in a given year.

But here we are again. It’s always such a pleasure. Remember when you’re at a formal function to not crack open that bottle of Coors Light. It doesn’t look good when you’re in that suit and there’s an unfortunate stigma about a man drinking a generic glass of wine. That’s why we’re here to help you get out of your comfort zone and give you some drink ideas for your next unnecessarily formal function.

As we do every year, here is our list of the top ten manliest drinks that aren’t beer or wine that you get away with drinking at a formal function.

This one is a bit more of a summer drink than a winter cocktail. That doesn’t mean you can’t order it. The name actually has a funny story as it was named after The Great Tom Collins Hoax. Wikipedia it, if you want to know. I’d explain it but I don’t particularly care enough to find out since I doubt it’ll be good small talk at a party.

Anyway, the Tom Collins has been a popular drink since the 1800’s and there’s no reason why you can’t order one now. Also, if you don’t want it watered down, you can ask for it without the club soda to make it a little stiffer. 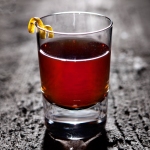 The Sazerac is a New Orleans style Old Fashioned. The problem is that it’s not a very well-known cocktail outside New Orleans so don’t be too surprised if you order this and your bartender can’t make it or has to refer to his little handbook. It’s the absinthe wash of the glass along with use of rye or cognac that make it different from the standard Old Fashioned. It’s a sharp drink but one that will certainly get you some attention when you get it at a party. 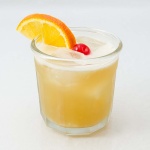 The whiskey sour can be a bit of an acquired taste but that shouldn’t deter you from trying it. Consider it more a warning so you don’t pull a face in public. The combination of sweet and sour does give this less manly reputation but keep in mind that Johnny Depp counts this one among his drinks of choice. That’s got to count for something, right?

The Sidecar was originally created in Paris during World War I. That’s why it has a couple of popular French liquors in the mix. While you mostly consider the French to be wine drinkers (not that there’s anything wrong with that), they do make a mean cocktail.

“Three measures of Gordon’s, one of vodka, half a measure of Kina Lillet. Shake it very well until it’s ice-cold, then add a large thin slice of lemon peel.” That’s not how you heard Daniel Craig order it in Casino Royale a few years ago but that’s how it originally appeared in the 1953 novel Casino Royale. Interestingly, in the novels, Bond only orders the Vesper in Casino Royale but he’s consumed them more frequently in the film series since the Casino Royale reboot.

While the origin of the Godfather cocktail has nothing to do with the movie, that doesn’t mean that the cocktail isn’t worth a try. Though the most common recipe uses scotch, you can use your preferred type of whisky, including my favourite, bourbon. The amaretto cuts the edge of the whiskey which helps it go down smooth. The classic golden booze colour helps matters too.

I don’t know if mentioned this before but I’m a bit of a scotch fan. Scotch should stand on its own but since this is a list of cocktails, I have to list scotch mixed with other things to get it on the list. Anyway, the Rusty Nail seems to be this year’s in drink. I do a bit of research to see what the latest popular drinks are when putting together this list and the Rusty Nail is at or near the top of most of them. I think that’s a pretty good sign that you can get away with this one.

If Don Draper drinks them then so can you. Granted, Mad Men is very shortly coming to an end and is coming off its popularity peak but that doesn’t mean that it doesn’t have a knock-on effect for the popularity of the Old Fashioned. Fun fact about this cocktail, though: It’s believed to be the first drink to ever be called a cocktail. That how it earned the name the Old Fashioned.

Last year’s #1 falls a spot this year. That’s what happens when there isn’t a Bond movie during the year and he spends more time drinking beer than martinis in the last film. You can make a martini with either gin or vodka but if you go vodka, like the version preferred by one James Bond, get it stirred rather than shaken. Shaking bruises the vodka. With gin, shaking is encouraged. That’s about the only time I’ll tell you to go against James Bond.

There’s nothing wrong with a good stiff drink. That’s exactly what the Manhattan is. The mixer is vermouth which is 15% alcohol. It’s mostly bourbon which is 40% alcohol. A few of these and it’ll make that office Christmas party go by quite smoothly. That’s how I get through my Christmas parties. It’s also important to note that this is the unofficial drink of the mafia. Who are we to argue with them?