As part of Ubisoft’s ongoing corporate strategy to introduce new franchises in new genres, they’ve decided to take on Need for Speed with their take on the street racing genre with The Crew. While it seems to borrow elements from the Need for Speed franchise, the emphasis on story missions, car customization and co-op play sets it apart from the only rival in the arcade street racing game genre.

Having spent a few days with the closed beta and a few years with Need for Speed games, can Ubisoft’s offering compete with EA’s resident racing series?

The Crew is an open-world racing game with a story campaign that spans the whole of America. While I haven’t played Rivals, from the games I have played, it seems something like Need For Speed: Most Wanted but with a whole country to explore rather than just a city.

I recall earlier reports that said that The Crew’s America would take about an hour of real time to drive from coast to coast. While the whole country has been downscaled to make it explorable, the major cities in the game are recreated in fairly good detail. They aren’t perfect recreations or to 1:1 scales but major landmarks are there and look fairly true to their real-life counterpart. For example, while Detroit didn’t have Ford Field across the street from Comerica Park’s knock-off, if you traveled north, there’s a fairly good recreation of the Mackinac Bridge.

This brings me to another concern about the layout of The Crew’s America. I found myself driving along a lot of dirt roads and highways rather than freeways. While I can understand how highways keep things interesting by bringing you through towns, past various points of interest and to challenges but it’s not exactly realistic. While the scaling reminds me a bit of the setup of Euro Truck Simulator, it doesn’t really strive for the realistic layout of the American road network.

To me, a perfect recreation of America isn’t necessary. I’m even willing to accept some of the changes to the “spirit” of the American freeway / highway / road network for the sake of facilitating gameplay. That being said, it may not be everyone so I want to get that little warning out of the way first.

Anyway, this game has a story. If you don’t want it spoiled, skip the next couple of paragraphs. However, if you are playing this game for a plot, the little taste I got will leave you sorely disappointed.

In The Crew, you play a man who is framed for his brother’s murder by a rival member of his street racing gang. As part of a super secret early release from prison comes about from a cop who wants you to go undercover to infiltrate the 510 gang to take down the head and a dirty cop who has buddied up with him. Your job is to assemble a crew and race/drive your way to the top of the 510s to take the whole organization.

The plot doesn’t seem to be something that’ll make you want to play the game. It’s really just there to move you from mission to mission and from region to region. I wouldn’t be surprised if most people skip that just to go racing around the country. I think it’s there out of some preconceived notion that a game should have a story rather than some desire to make a racing game with a worthwhile plot.

To go along with your story, I’ve encountered three main types of missions. There are races which is what you’d expect from a racing game. You are tasked with taking down other drivers to aid in moving up the ranks of the 510s by wrecking their cars. And there are police evasion missions that see you on the run from the cops.

Outside of the missions, there are various minigames and challenges that you encounter as you traverse the roads of America. There are a multitude of various challenges but they tend to revolve around precision driving, speed and stunts. There are slalom courses, shrinking gates, staying on the racing lines, covering distance over 50 MPH, jump distance and more challenges for you to do. They don’t really add much to the game except to keep you occupied until you drive to your next story mission.

Now, there is co-op in The Crew. The titular crew is a group of people grouping together to complete the missions. I don’t see how it really makes a difference from playing the beta but my Uplay friends list is basically empty. Then again, isn’t everyone’s?

So that’s why Ubisoft has created the ability to do a bit of quick co-op at the start of missions from the mission start menu. Often, it was the first option on the menu above tackling a mission solo. You can also invite people as you drive along. There’s an emphasis on co-op but it doesn’t seem like you need to co-op to succeed in the game.

Whether this was a bug or a case of how limited access to the beta was, I didn’t encounter very many other players in the game. I saw a few on the first day and some more when I was touring around in Florida on the last day of the beta but not many in between. This will be a case of something that could just be closed beta is closed beta rather than a reflection on the state of the game at the moment. Still, if you’re going to be a shared world racing game, you expect other people to share the game with you. 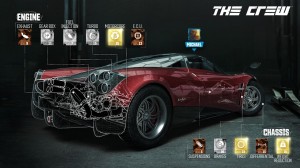 Beyond the co-op, where The Crew really shines is customization. Each of the scads of cars in the game can be tuned to star on a different type of road surface, be it streets, race tracks or off-road. In turn, various parts (that are won or purchased) can be added to the cars to improve performance. Even the body of the car can be tweaked with custom parts and paint to make it look how you want.

This is one aspect of the game where The Crew excels over Need For Speed. EA’s flagship driving franchise does a very good job of the actual driving but not much beyond that. The Crew seems to be more about all the experience surrounding the drive to keep you busy in the game’s world.

And customization brings up a very important FYI. There are two currencies in the game. The standard in-game currency is Bucks while the microtransaction currency is called Crew Cash if memory serves. The Crew Cash wasn’t activated for the closed beta but it was next to pretty much anything you can buy. So you’re buying a full $60 game that will likely come with paid DLC but you can still pay to buy stuff faster. This industry is scum sometimes.

I’ve gone a long way in this supposedly short impressions post without actually talking about the car handling and physics. They’re a bit odd to get used to at first but you do get the hang of it. The most jarring thing to adapt to is the weight and grip of the car. I spent most of my time in a Mustang (of course I did) and found it to have a realistic feeling weight and tendency for the back-end of the car wanting for that weight to whip around on you. Unfortunately, the weight and driftiness of the car was undone by unbelievably grippy tires. While I could fling the car around, it would almost as quickly sort itself out. It might have been the driver aids but there are just three presents and no custom options.

So two things come from my driving time: 1) I’d like a lot more freedom to set my driver aids individually and to varying degrees beyond on and off; and 2) Let’s take some grip off of those tires. If I’m driving an arcade-style racing game, I’d like to do a little drifting. It seems so much easier in Need for Speed but you also feel as though you’re always in control.

The other odd thing about driving is the weight of objects in the world. While I didn’t have any clipping issues, none of the elements of the environment, apart from solid objects like buildings, had any effect on my car’s speed or direction. Lightpost or fence? Go straight through it. A street curb? That’ll rattle your bones. Go figure that no harm can running into a pole but heaven forbid you go up on the sidewalk.

While it is a beta and optimization was one of the things Ubisoft was testing, I did have a few issues. First, the framerate was locked at 30 FPS but that’s not a massive issue during a beta for a game that’s four months. What I was concerned about was the framerate dropping because of grass and foliage. I had to turn that down to medium to keep my framerate from chugging when doing off-roading. I also read that the higher degrees of anti-aliasing hammered framerates. Hopefully a little work can get the game running smoothly at 60 FPS with all the bells and whistles on without having to run two GTX Titans.

Still, the textures looked okay and the cutscenes look absolutely gorgeous. The smoke, fog and other particle effects look pretty good too. That’s where you can tell that this is a next-gen game. The actual environment could use a little coat of paint but that might also tie into the whole 30 FPS thing that the beta had going on. The intro indicated that this wasn’t really to gauge the performance of graphics options but on driving, missions and stability.

Speaking of stability, I only had one crash in my few days with the game. I’d say that wasn’t too bad considering that I’ve had more crashes playing full releases of other games.

While I came into The Crew expecting Ubisoft’s take on Need For Speed. While it’s certainly that, it also adds in some of the classic Ubisoft trappings. While there doesn’t seem to be the usual Ubisoft collectables that you can find going through the map, there are scads of minigames / sidequests to keep you busy. And while challenges and customization are nice, they aren’t why you want to play a racing game and it’s the racing that needs the most work.

That being said, there’s no reason why The Crew can’t get up to the standards that we’d expect from a Need For Speed competitor in the next four months. The parts and pieces are in place. Everything just needs a little bit of polish in order to get it to triple-A level. It’ll be a challenge to get it all right in an open-world game but that’s the challenge that Ubisoft and Ivory Tower have undertaken with The Crew.

The Crew beta was reviewed on PC. The game will also be available on PlayStation 4 and Xbox One. The impressions of the game as written do not necessarily represent the state of the game at final release. Your impression of the game may differ based on platform played on, PC specs, racing game preferences and how many Uplay friends you have.