While the FIA and FOTA have been working on ways to improve the show by making the cars more passing friendly, a pair of circuits are taking the initiative to improve the show on their end. The Silverstone Circuit, home of the British Grand Prix, and the Sakhir Circuit, home of the Bahrain Grand Prix, will both feature a new layout for their 2010 grand prix weekends.

Track maps and analysis after the jump. 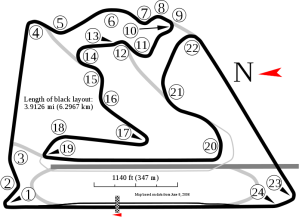 The Bahrain International Circuit was designed to have multiple layouts when it was constructed. For the first six years of the Bahrain Grand Prix, the race was run on the designated Grand Prix Circuit layout. However, this year’s season opening Grand Prix will be run on a different layout.

The new for F1 Endurance Circuit was completed in 2006 to hold races with a higher car count. It’s about 0.8 km longer than the GP layout which will give the cars more room to string out. The track exits the old GP layout at Turn 4 when a former right-hand hairpin becomes a quick 90-right into eight slow corners. If the corners are slow enough, the aero turbulence may be low enough that the cars might bunch up before they string out again in the medium speed corners. The old GP layout was probably one of the most passing friendly circuits designed by friend of the insomniac Hermann Tilke. I’d be going out on far more than a limb to guess that this decision won’t work out the best for Formula One.

One of the oldest tracks in Formula One was scheduled to under go a massive makeover the 2010 but it will carry that redesign to F1. After temporarily losing the F1 British GP to Donnington Park, Silverstone got the contract to host the MotoGP race that was previously hosted at Donnington. However, the current Silverstone F1 layout wouldn’t be well suited to the bikes so they created a more bike-friendly layout. Now, the new Arena Circuit at Silverstone will also play host to Formula One.

For the first half of the circuit, it’s classic Silverstone. (Follow the red line on the track map for the F1 layout. The Moto GP layout is in blue and has a couple of reprofiled corners.) Once you get to Abbey (Turn 11), the track goes right instead of hard left. Then it’s an easy dogleg left, then a pair of slow turns before it joins the already existing Club Straight. That’s on the North Short Circuit. The new layout skips Bridge and Priory before rejoining at a faster and longer Brooklands and finishing the lap as we’re used to. It’s a slightly longer layout than the old circuit. It also cuts out some of the high speed corners that made Silverstone so fun. Track bosses think this will be at least as good a show as the old layout. I think they may be reaching a bit on that one.