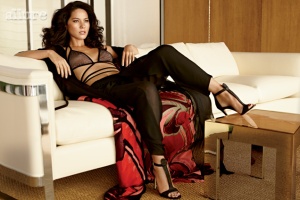 In theatres this weekend, it’s either you go for a family affair in the ET inspired Earth to Echo. Otherwise, there’s the horror/thriller Deliver Us From Evil starring Eric Bana and Olivia Munn. Speaking of Olivia, let’s start off this entry with her.

After the jump, old age is catching up to the Expendables, learn what Bayhem is all about, check out some neat concept art for the Dinobots, Community is back and watch Joel McHale and a fellow comedian go out for some cocaine.

Now that’s weak sauce! The Expendables 3 will be the first in the franchise to be rated PG-13! I guess there won’t be as much bloody violence and swearing this time around. (Slashfilm)

The soundtrack for Guardians of the Galaxy features some nice classics. Check out the cover art for it and take a listen to the tunes as well. (The Playlist)

While promoting his new TV series The Strain, Guillermo del Toro reveals more about his vision for Pacific Rim 2. (The Wall Street Journal)

Check out this interesting video essay on “Bayhem”. It’s nice to break down Michael Bay’s filmmaking techniques. While it is not groundbreaking or original, at least he does like to take things to the extreme! (Vimeo)

Fast and Furious 7 is getting a slight bump ahead in the release date next year. (THR)

Good news Community fans. Season 6 is now happening and it’s all thanks to Yahoo. So, shall we aim for that movie followup as the grand finale? (Vulture)

Sure it is nice to see Yahoo save our beloved comedy from cancellation, but why would it be spending millions to bring it back? (Vulture)

Have a look at some really neat concept art for Transformers: Age of Extinction. (Comic Book Movie)

X-Men: Days of Future Past is now the top grossing film of 2014 worldwide. It might not hold onto the title for very long as Transformers is quickly rising up the charts. (Collider)

There must be some really passionate fans out there. The bench in Amsterdam where Hazel and Augustus share their first kiss in the film adaptation of The Fault in Our Stars is now missing! (Entertainment Weekly)

Music recommendation of the week. This time it is the cover of Iggy Azalea’s track Fancy. The thing is, this cover sounds way better than the original.