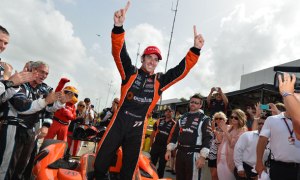 One of the storylines that troubles the rules makers in motorsports is if dominance sells. Last weekend, we saw two races dominated by two different groups but the result was dominance. On the Saturday portion of the Houston doubleheader, it was the Colombian contingent of drivers mimicking the success of their country’s World Cup team with a sweep of the podium. Sunday saw a team dominate with Schmidt-Peterson scoring their first-ever one-two sweep.

Race One of the Houston Grand Prix was delayed and turned into a 1:50 timed race thanks to an unexpected and unusual summer storm in the heart of Texas. While all the practice and qualifying to that point had been in dry, sunny weather, shortly prior to the first part of the doubleheader, a monsoon washed through the track causing the race to be delayed while standing water was cleared. 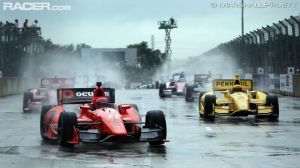 Simon Pagenaud led away from the lights but only lasted four laps in front. Brake troubles quickly moved him back through the order. The big winner at the start of the race was Takuma Sato. The F1 veteran used his wet weather experience and ridiculous daring to move from 6th to 3rd on the start and quickly into first.

The day didn’t go completely to Sato’s plan and it was none of his own doing. Despite pulling a sizeable gap over the field, he was reeled back in as Marco Andretti refused to yield to blue flags as Sato tried to lap him. On the exchange of first round pitstops, this would prove critical as Andretti’s teammate, James Hinchcliffe, jumped to the point.

Sitting in second, Sato became the victim of lapped traffic on a restart as an ill-advised pass attempt by the lapped car of Mikhail Aleshin put both cars into the wall and out of the race.

From there, it became a strategy race as teams tried to gamble on just enough tires and fuel to get them to the end of the race. While many drivers, including Hinchcliffe, stuck with a more conventional strategy, a number gambled on a long late run to fuel mileage their way to a win.

Leading them was Carlos Huertas. The rookie Dale Coyne pilot was chased down by a gaggle of faster cars including Juan Montoya, Tony Kanaan, Graham Rahal, and Carlos Munoz. A late caution caused by Sebastian Saavedra bunched the field up for what appeared to be a one-lap shootout before time expired. However, Rahal got a bit too excited for the restart and punted TK into the wall which extended the caution past the time limit giving the win to the rookie. 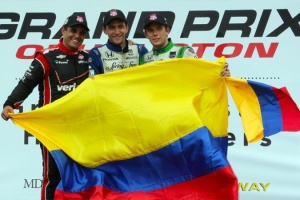 Huertas’s win was the first of his IndyCar career and in only his 9th race start. It was also his first career top-five and third top-ten. Not too bad for a pay driver. Juan Pablo Montoya crossed the line in second but thought he could have won if he got that one-lap green flag run at the end. Rahal crossed the line in third but was given a 30-second time penalty for avoidable contact with TK that relegated him to 11th. Promoted to the podium was Carlos Munoz who made it a Colombian sweep of the podium.

Sebastian Bourdais had a good run that even impressed NBCSN’s Paul Tracy which is saying something. He finished 4th. James Hinchcliffe led the most laps but only managed 5th. Jack Hawksworth’s run to 6th impressed NBCSN’s Steve Matchett which also marks the only time I’ve felt compelled to note which commentators were impressed by which drivers. Ryan Hunter-Reay finished in 7th. Marco Andretti’s blue and black flag dramas didn’t stop him from ending the day in 8th. Helio Castroneves started the day in 2nd and ended it in 9th. And Justin Wilson rounded out the top ten in the other Dale Coyne car.

Normally when doing a doubleheader recap, I’d jump straight from Race 1 to Race 2. However, controversy dictates that we fast-forward to Wednesday before talking about Race 2.

On Wednesday, IndyCar announced a penalty for the first race of the Houston weekend involving race winner Carlos Huertas. IndyCar penalized Dale Coyne Racing for a pair of infractions. There was a $5,000 fine for rear-wing height infraction. More damning, was the $5,000 fine for a fuel cell that was larger than the 18.5-gallon size in the rules. 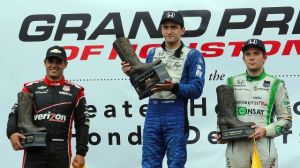 Considering that Huertas won on fuel mileage and Montoya was quoted after the race as saying that he thought that Huertas was going to run out of fuel and he’d be able to cherrypick the win, this is a very big rules violation. IndyCar President of Competition Derrick Walker said that data analysis indicated that there was no advantage gained by the extra fuel and this did not cause Huertas to win the race.

Normally, I wouldn’t complain too much about rules infractions that don’t have a major impact on the race and just let it go. However, a fuel cell violation in a fuel mileage race would be cause for me to say that the win should be stripped. If you have more fuel than you should, it will provide an advantage whether the data says so or not. It let Huertas push a little bit harder or a little bit longer and the result was a win in a fuel mileage race.

The way I think about it is this: If I ran an engine that was 2,205 cc rather than 2,200 at an oval race, would the IndyCar officials go to the data to see if I gained an advantage? What if I ran a car that weighed 1,540 pounds instead of 1,545? That’s not significantly different but it’s still an advantage. I’d disqualify me on the spot. We’ve seen F1 disqualify Daniel Ricciardo on the spot for a fuel violation this season. I’m sure Huertas is a swell guy and I love seeing Dale Coyne succeed but I’d have thrown them out of this race for that violation.

While the first race was all about the Columbians, the second race was all about Schmidt-Peterson Motorsports. The little team that’s just scraping by on race-to-race sponsorship of Pagenaud’s car and Aleshin’s purchased drive managed to score its first 1-2 sweep in IndyCar. 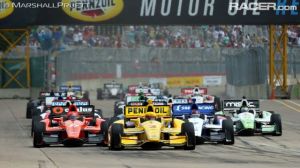 Despite the end result being a SPM one-two, it didn’t look like their race for the vast majority of it. Helio Castroneves won the pole for the race and led 47 of the first 48 laps. The only time he ceded the lead was when he pitted and Pagenaud cycled to the front. For 47 of those first 48 laps, it was Pagenaud quietly biding his time and waiting for the opportunity to pounce.

He was given the chance after a mid-race caution. He made his move at the end of the backstraight and dove by Castroneves. At the same time, Sebastian Bourdais tried making a move. The problem is that street circuits aren’t made for three-wide racing and Helio was the loser in the exchange. In the span of one corner, he went from first to DNF. A disastrous weekend for championship leader Will Power was saved by this crash when Helio should have ended it right on his teammate’s tail. 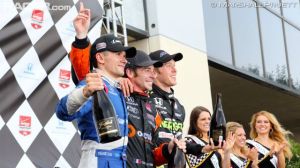 Pagenaud’s win is his second of the season which pulls him up to 4th in the championship standings. Trailing him home was his teammate Mikhail Aleshin whose 2nd place would have given him the highest rookie finish of the season if it wasn’t for that Huertas guy winning the race the day before. And rookie Jack Hawksworth improved on his 6th on Saturday with a 3rd in Race Two.

Charlie Kimball finished in 4th which hopefully marks the end of the awful teal-coloured car he ran in Houston. Sebastian Bourdais went back-to-back races in the top-five with a 5th on Sunday. Ryan Hunter-Reay finished in 6th. Juan Montoya scored his third-straight top-ten with a 7th. Ryan Briscoe crossed the line in 8th. Marco Andretti finished 9th. And Tony Kanaan rounded out the top ten.

By the way, Race 1 winner Carlos Huertas only ran two laps before an electrical fault ended his chance at a weekend sweep. 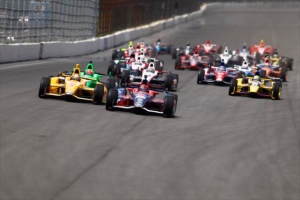 The next round of the 2014 IndyCar Series is this weekend. It’s the second leg of IndyCar’s Triple Crown and it’s a 500-mile race this season. The series goes to the mountains of Pennsylvania for the Pocono IndyCar 500.

As always, you have to like Ed Carpenter’s chances at an oval. He won in Texas and ran near the front of the whole 500 so a win wouldn’t be surprising. Apart from Carpenter, the favourites have to be the four cars from Andretti Autosport who were fast in Indy and the Penske cars who have been fast in the two oval races thus far.