The Mass Effect 3 Omega DLC has been an interesting topic of discussion. While most Mass Effect fans loved Aria T’Loak, the overlord of the Omega space station, would doing a mission with her be worth the extra $5 that BioWare was charging? When it was released Lair of the Shadow Broker was the most expensive piece of Mass Effect 2 DLC. Could Omega live up to the legacy of LotSB?

Spoiler Alert: There will be some minor plot spoilers for the Omega DLC and various spoilers from the rest of the game.

In something that shouldn’t be a surprise to anyone, this is another pre-ending DLC. It also seems to affect the ending in no way unless another 400 War Assets will make a difference in which ending you get.

You pick up this mission from an email to your terminal. Then you’re quickly whisked away for a ground assault to remove the Cerberus forces occupying Omega. If you haven’t read the comics or novels, you’ll learn about Cerberus General Oleg Petrovski who now runs Omega and why Cerberus had a presence on Omega in the first place.

The story highlight of Omega is the two characters who tag along with you. Your usual crew of squadmates are replaced by the heavily advertised team of Aria T’Loak and female turian Nyreen Kandros.

(Aria says that your usual team can’t tag along because it would have cost too much to bring all of them back for a DLC and afford her. Okay, she says she doesn’t like them but the implied meaning was cost savings.) 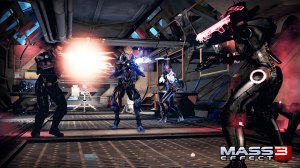 Unsurprisingly, Aria plays the quintessential renegade. She’ll stop at nothing to retake Omega and run Cerberus off her station. Nyreen is the moral opposite who follows the paragon path. Her concern is about limiting collateral damage to Omega and its citizens while still ousting Cerberus. There is seldom a middle ground in your answers. It’s either renegade or paragon with each squadmate on a side.

On the plus side, your decisions do affect the ending of the DLC. If you stick with the paragon path in Omega, you’ll get a different ending than if you went mostly renegade. You can’t say that BioWare isn’t learning from its mistakes. At least, in Omega, your decisions matter. Okay, that might be a bit unfair to BioWare but we all would have understood if that was the case with the ending of the main campaign.

On the whole, Omega is a story-light DLC. It reminds me of Overlord in a way. It’s a self-contained mission that does nothing to change the overall story of the game or the series apart from a little payoff later on. In Overlord, it was the discussion with Dr. Archer in a side quest in ME3. In Omega, the payoff is more war assets. You’re not going to play Omega for the story. You’re playing because you like Aria or want to see a female turian.

Let’s start off with how long this DLC is. Mass Effect 3 producer Mike Gamble said that Omega would be double the size of the next largest Mass Effect 3 DLC released (Leviathan). BioWare clarified that the length of the DLC was four hours. Leviathan took me 3 hours but I took my time to wander the Normandy between segments of the mission so six hours would be too much to ask. It turns out that even a four-hour playtime was too much. Taking my time to talk to everyone and explore every nook and cranny, my Omega playthrough was about 2:48. Many players have said that the DLC was only two-and-a-half-hours. I’d be willing to give BioWare 30 minutes of leeway from their estimated completion time. Releasing a DLC over an hour short of the four hours BioWare advertised means that they didn’t live up to their promise. 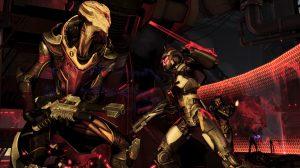 Combat in this DLC is the bog standard Mass Effect 3 DLC. The biggest changes come from new enemy design scooped from the multiplayer portion of the game. The last multiplayer DLC, Retaliation, introduced characters designed to force players from cover. The new Rampart Mechs and Adjutants were designed to do just that. They close quickly so you either have to prioritize them as targets or fall back out of cover and into the sights of Cerberus’ other troops. Unfortunately, these two enemies weren’t nearly as fearsome as advertised. Ramparts were easier to drop than Centurions. Adjutants were a little more difficult. They’re Brutes in terms of health and that they charge you but they can also shoot singularities. They aren’t unstoppable killing machines. Alone, they aren’t too difficult. They’re only really a pain in the final battle.

Well, I shouldn’t say that combat is bog standard. Even with the new enemies, having Aria and Nyreen with you makes combat laughably easy. Aria’s biotic abilities, especially Flare, are amazingly overpowered. Nyreen is able to mow through enemies quickly as well. Put the two together and you can take a break while they do all the work. Fortunately, you’re seldom paired with both which makes combat a little difficult rather than nearly boring when you have both in your party.

Speaking of multiplayer, the other two multiplayer objective waves were introduced in single-player. Leviathan introduced escort and delivery objectives. Omega introduces the four device deactivation and target assassination objectives. When with Aria and/or Nyreen are in your party, these objectives are very easy since you don’t have to worry about the enemies driving you away from the objectives. 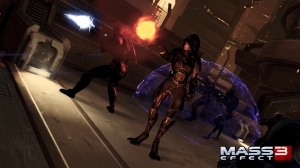 Omega looked like Omega we know and love but I found was that it wasn’t until the end that it looked and felt like the dirty, seedy underbelly of the galaxy. In Mass Effect 2, Miranda said that Omega was the sort of place where you would have a second shower after your decontamination shower. While the colour palette and level design looked like what we knew of Omega, it felt a little too sanitary for me.

I’d like to say there was something noteworthy from the audio but not really. Carrie-Ann Moss was back as Aria. The performance was a bit uneven. I was looking for the badass Aria we know from ME2 and ME3. A few lines sounded like a mailing-it-in Carrie-Ann Moss. That’s just a few lines but when Aria doesn’t sound like she’s in charge or fighting to be in charge, it sticks out like a sore thumb. Moss was still better than Petrovsky’s voice actor who seemed less sinister and more listless. Nyreen’s voice actress (unknown at posting), was good. Nyreen’s strength was being a strong moral opposite to Aria and sounded believable as one.

The Omega DLC is nothing but pure fan service. The return to Omega, adding Aria as a squadmate, the introduction of female turians and even travelling in elevators are all included to make fans of Mass Effect happy. I can’t fault BioWare in the slightest for doing that. Those were definitely the best parts of this DLC.

However, this DLC just didn’t live up to the expectations built up by the price. The four-hour playtime was either massively hopeful optimism or a flat-out lie. A chance to explore the pasts of both Aria and Nyreen would have been nice to have since the Mass Effect series tends to excel at creating the massive and immersive universe. The hope that Omega would become a second hub world for the Normandy with additional side missions and activities for Shepard and crew didn’t come to fruition either.

On the whole, I just didn’t like this any more than Leviathan. At least Leviathan padded the story and lore of the Mass Effect universe. Omega is a fun bit of nostalgia and fan service but doesn’t add anything to the universe. As a standard mission part of your retail purchase of ME3, it would be fine. As a $10 DLC, you might be able to justify paying for it. As a $15 DLC, there’s just not enough new content to justify the price. While it’s no worse than Leviathan, it would be rated the same as Leviathan if it was the same price. There was just too much unfulfilled potential and unfulfilled promises to rate it any higher.

Mass Effect 3 Omega DLC was reviewed on PC but is also available for the Xbox 360 and PlayStation 3. Your impression of the game will change depending on your PC specs and which platform you played the game on.