Tomorrow, the whole Formula One season will be turned on its head.  Either six cars from Brawn GP, Williams, and Toyota will have their controversial diffusers found illegal which will cause them to be disqualified from the first two rounds of the world championship or they will be deemed legal forcing the other seven teams to play catch-up.

So before we get to Tuesday’s game changing meeting of the international court of appeal, I thought I would be a good idea to look at how a diffuser works on an F1 car and why the solutions the three teams under protest have developed are so far ahead of the competition.

How A Diffuser Works

Diffusers are essentially a raised area at the back of a car. In order to maximize the effectiveness of a diffuser, a car has to be run as low to the ground as possible. This causes the air trapped between the car and the ground to move rapidly to the rear. The diffuser section in the rear causes negative pressure at the back of the car because it has a bigger volume than the area that the air flowing into it is coming from. This negative pressure accelerates the air under the car which puts the whole underside of the car under negative air pressure. This creates a vacuum effect under the car which sucks it into the ground and creates downforce.

The picture of Ralf Schumacher’s car above is the best illustration of a pre-2009 F1 diffuser I could find. The diffuser section of the car starts at the leading edge of the rear tires and runs to the back of the car.  The FIA have tried to limit the effectiveness of the diffuser by mandating a 50mm step between the legality plank (the long wooden panel running along the length of the car) and the bottom of the sidepods. This greatly limits the ability of cars to accelerate the airflow underneath. If you look at the very back of Ralf’s car, you can see some small carbon fibre fins. These are used to clean the air flow at the back of the car. The cleaner the air coming out of the back of the car at the diffuser, the more efficient the diffuser is and more downforce is created. 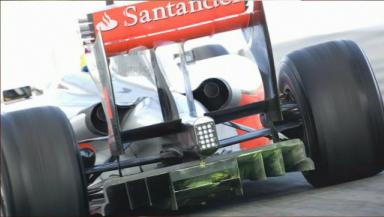 Williams is running a “double-decker” diffuser.  As you can see on the picture, the middle part of the diffuser is bigger than the outside parts.  Also, there are two diamond shaped holes in the top-centre of the diffuser, right below the rear warning light.  These parts of Williams’ diffuser are designed to channel air from the top of the car and underneath into those holes and the large centre section to increase the efficiency of the diffuser.  The air funnelled in from the top of the car is supposed to increase the speed of the air flowing underneath the car, lowering the air pressure and creating more downforce.  The protesting teams also contend that the total height of the centre section is greater than the 175 mm from the reference plank allowed in the regulations. 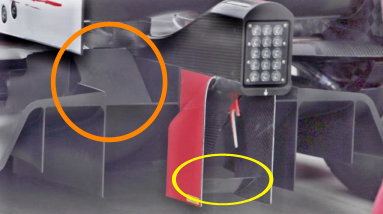 If I was to take this at face value, I would imagine that this is the least controversial design of the three in question.  One controversial element is the vertical-running red winglets coming down off the rear warning light.  This effectively lengthens the diffuser in the middle section.  Toyota feels that those red pieces of bodywork are legal because they are part of the rear crash structure because that is what those pieces of bodywork are bolted to.  In order to further clean up the air coming off the diffuser, Toyota has a little winglet to that bodywork that I’ve highlighted with the yellow circle.  In addition to this, Toyota, like Williams, is channelling some extra air from above the car into through the diffuser using the section highlighted with the orange circle. 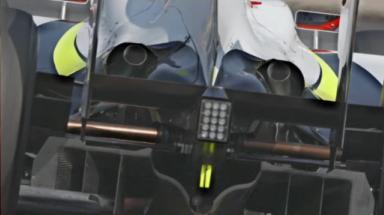 Immediately, you can see that the curved centre section of the Brawn diffuser is unlike anything on any of the other cars.  This is the controversial part that is under protest.  You can’t really tell from this picture is that in the upper-left and upper-right areas of the central part of the diffuser have small holes, like the Williams, which feed air from the top of the car into the diffuser to accelerate the air.  This is part that is under protest.

One last point of interest before you go. 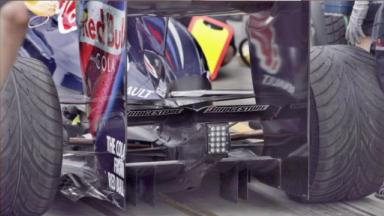 This is the Red Bull diffuser which is not under protest. If you look at the rear wing end-plates, you can see that they extend down next to the diffuser and along its full height. The endplates act effectively as strakes as they extend the width and depth of the diffuser. It’s not as controversial as the diffusers above but almost as liberal with their interpretation of the rules.

Now the question is what will happen tomorrow.  Regardless of who wins, Max Mosley’s cost cutting will be thrown out the window.  Teams are going to throw piles of money at the diffuser to quickly come up with a solution so they don’t fall behind the rest of the pack.

7 thoughts on “Formula 1: How Does a Diffuser Work?”