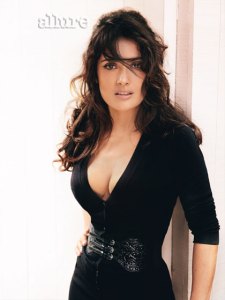 Is it just me or has this week flown by? Maybe it has to do with everything that’s happened in the world over the last seven days. But let’s try to get things back to normal with Salma Hayek who looks her amazing mind-bogglingly amazing usual.

The sports world has been abuzz with the impending collapse of the University of Miami football program after this Yahoo investigative report which details illegal benefits given to players. (Yahoo Sports) Of course, the U’s big mistake was getting caught. I’d be willing to bet it happens everywhere.

The other big story in the sports world is this feature-length interview of Michael Vick. (GQ)

It’s been about two months since the launch of Bill Simmons’ Grantland website. However, as this takedown of Bill’s site says, it’s all been much ado about nothing. (Bryan Joiner)

Let’s do the time warp again! With a pair of 80s reboots, Hollywood has certainly hit its stride in creativity this weekend at the box office. While all the kids are lining up for The Karate Kid remake (which is suprisingly borderline fresh), the rest of us will take a look at The A-Team (which is borderline rotten). If the film has Jessica Biel in it, then it’s probably worth checking out. How bad could it be?

After the jump Darth Vader has mental health problems, Russell Brand has an interesting choice of films, The CW is desperate for attention, some Transformers stuff, Jeremy Roenick is a class act and some Mortal Kombat stuff to please most fanboys out there. END_OF_DOCUMENT_TOKEN_TO_BE_REPLACED