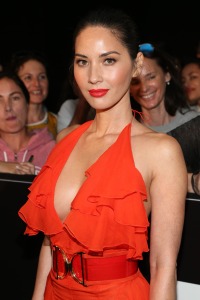 Another week into the new year and hopefully your new year resolutions are still intact. If not, perhaps a video in this link-off will help you manage that! It’s a quiet weekend at the box office with only the release of The Forest. Perhaps it’s worth checking out those awards contenders that are slowly getting wider releases this month. Anyway, let’s kick this off with Olivia Munn at the premiere for Ride Along 2. Looks like it will be a good year ahead for her as she is also set to appear in Zoolander 2 and some superhero flick called X-Men: Apocalypse.

After the jump, don’t expect a Teen Titans show anytime soon, a few tidbits on Fuller House, there is a backstory to stormtrooper TR-8R, Michael Bay ain’t done with Transformers yet, Will Smith is a little sad about Independence Day 2, mark your calendars for Daredevil and Game of Thrones and finally, the best driving lesson courtesy of Conan, Ice Cube and Kevin Hart.

You can blame Kevin Reilly on this one. He killed off the live-action show for Teen Titans that has been in development at TNT. (Deadline)

First photos from Fuller House gets most of the Tanner family back together. (Slashfilm)

Looks like Fuller House had a contingency plan if the Olsen twins didn’t want to be a part of the show. Too bad the back up plan didn’t work out either. (Screen Crush)

Michael Bay is returning to make another Transformers movie. After the fifth installment, he’ll definitely be done with the franchise. Apparently he’s for real this time. (Rolling Stone)

Adam Sandler might not be doing that great at the box office anymore (both critical and commercial duds), it seems like his work on Netflix is still doing alright. In fact, his flick The Ridiculous Six is the most watched film on the streaming platform. (The Verge)

Even Will Smith is sad about his character’s fate in Independence Day: Resurgence. (Yahoo)

It definitely sounds like Joss Whedon is really done with the Marvel Cinematic Universe. Who can blame him after Age of Ultron took such a toll on him. (Uproxx)

There is no end in sight for The Walking Dead. (Vulture)

True Detective season 2 was a bit of a misfire and HBO’s Michael Lombardo opens up about why the show didn’t live up to its potential. (The Frame)

Yahoo saved Community but Community could not save Yahoo. (Variety)

Bad news Game of Thrones fans. Winds of Winter is not finished and it won’t be released before season 6 of the show. (Livejournal)

On the bright side, at least you can mark your calendars for the release date of Game of Thrones season 6! (Collider)

The new teaser trailer for Daredevil season 2 is out and it shows a release date that does not conflict with Batman v Superman as previously reported.

Honest Trailers tackles The Martian this week. Let’s recount all the times Matt Damon has been rescued in movies.

Creed was a fantastic movie and Michael B Jordan did a fantastic job. You gotta hand it to him for really putting in the effort for the film. Have a look at him getting knocked out on set.

It is not a proper driving lesson until you get Ice Cube and Kevin Hart involved.

We’re a week into the new year, so how are your resolutions doing? Perhaps allow John Oliver to help you manage these resolutions.