Sometimes, a game comes out of absolutely nowhere to take the world by storm. Shortly before it was launched, Rocket League became the hot game in the gaming sphere thanks to developer Psyonix getting the game in the hands of popular let’s players and streamers. Now, it’s cemented in the top games on both Twitch and Steam (in both players and sales).

So how does this little indie juggernaut really stack up when you go beyond the hype?

If you’ve ever watched Top Gear (or the former Top Gear as it might now be known), you may have seen various matches of car football. That had teams of six cars crash into each other and try to put a giant inflatable soccer ball into the goal.

Rocket League is fairly similar. You’re on a team of up to four players with the objective of scoring as many goals as possible in the five-minute match. Most goals wins and ties go to sudden death (or golden goal, to use soccer parlance) overtime. 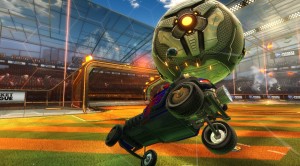 As of right now, the game is fairly simple. Considering how hit and miss that I am when playing the game, I’d probably chalk this up to easy to play and hard to master. Every now and then, you can make or see an utterly epic play that makes you think that you can make a go of this in an ESL tournament. Then you watch the pros play this on Twitch and realize that you’re nowhere close to that level.

For the most part, you’ll be spending your time playing online and the majority of that playing unranked. There are 1v1 through 4v4 queues for both modes but most people will play unranked. Also, there’s no 3v3 queue that allows you to play with a party of three so you and two friends will have to stick to unranked. Apart from 3v3 ranked, you can play with a party of friends in any online mode.

Helping matters is that there is cross-play between the PC version of the game and the PlayStation 4 version of the game. The PS4 version is actually on PlayStation Plus’ Instant Game Collection right now so there’s a sizeable player base at the moment. I don’t know if you can play with your PlayStation friends on Steam if you have those accounts linked up. I’ve never actually done that now that I think about it. But the important piece of information is that you have two platforms of players coming together to keep the community alive. Even nearly a month after release, EDT primetime has well over 100,000 players online. It doesn’t look like you’re going to have trouble finding a game any time soon.

Anyway, there is an actual game here to talk about. 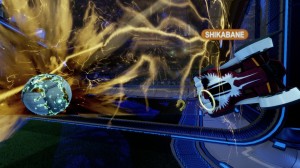 We’ve gone over the basics (two teams of up to four vying to score more goals than the other). What I didn’t mention is that all the cars are the same with the exception of some slight variations in hitboxes. They all have the same acceleration, top speed, boost and handling characteristics. The different car shapes will affect the hitboxes slightly but I’m not sure that really matters until you get some experience and get good enough that these hitbox differences matter.

What that leaves is really a game where skill is what differentiates the players. Because all of the maps and cars (effectively) are identical, there’s no worry about balance. All the changes you can make to your cars are cosmetic. I haven’t done the math but Psyonix says that there are something like ten billion combinations for the aesthetics of the cars. You can customize the paint scheme, colours on the car (within a limited range for the primary blue or orange), wheels, antenna topping and boost trail.

One thing that Rocket League does well is the sort of game within a game. Even if you’re not scoring, you’re still earning points based on your actions. So while the glamour is in scoring, you’re earning points for shots on goal, putting the ball in the box, clearing the ball from your own and so on. Even if you’re not putting the biscuit in a basket, it helps you feel as though you’re accomplishing something when you can’t say “scoreboard” to show your prowess. 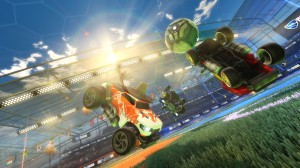 The graphics aren’t too bad for an Unreal Engine 3 game. The crowd isn’t spectacular looking but you’re not really paying attention to them. There aren’t many different textures being used in the game so the ones they are using look good when turned up to full detail. Also, being an Unreal Engine 3 game, it’s fairly soft on the hardware. I didn’t notice my framerate dipping below 60 FPS but I could imagine the use of NVIDIA PhysX could make that a real possibility on lower or mid-powered AMD machines.

The game’s not perfect. What game is? There have been a few reported instances of hacking which seem to be largely unlimited boost and a ball that is always in the perfect position for the hacker. I’ve had a few instances of crashing when loading into a game. Recently, I’ve had a few invisible opponents and/or teammates in some games. When you can’t see someone else on the field, it kind of makes playing damn near impossible.

The matchmaking is hit and miss. While it’s quick, at the lower ranks, it seems as though the teams are seldom balanced. The game appears to work on a level system that is based around those points you earn in a match that I mentioned earlier. I’m not sure that’s a particularly good proxy for an MMR (or equivalent formula) but at the higher levels, I’ve had far more heartrendingly close matches than blowouts. Granted, at the lower levels, people are learning at their own pace so skill disparities will likely be bigger. That doesn’t stop the possibility that you’ll have three people at a “semi-pro” (Levels 10 to 20, if memory serves) or “pro” rankings who have very different skill levels. It doesn’t happen often but going from a great team to a terrible one can be aggravating.

One notable omission that I’ve only really thought about in the last couple of days is a lack of blocking and reporting functions. I’ve played many games but only had two games with a person so salty that I wanted to block him so I’d never see or hear from him again. There is a muting function but it’s through the pause menu and I’m actually surprised that I found it. It was a pleasant find, though. I can understand why it would be there because that’s about the only way it could work for PS4 gamers. 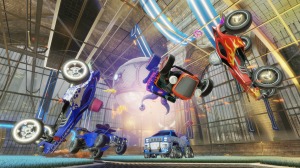 If this seemed like a short review, that’s because this is a pretty simple and straight-forward game. Simple isn’t necessarily a bad thing, though. Psyonix have taken a single idea (rocket-powered cars playing football) and honed it to near perfection. The gameplay is near perfect. The parts surrounding it aren’t quite there yet but you’re going to spend so much time trying to bash a ball with a car that I doubt you’ll notice or care. Doing that is incredible fun. Isn’t that the most important thing you can say about a game?

Rocket League was reviewed on PC but is also available for PlayStation 4. Your impressions of the game may differ based on platform played on, PC specs and whether you think that football should involve the use of feet rather than the use of rocket-powered cars.

One thought on “Rocket League Review: Tonight on Top Gear”