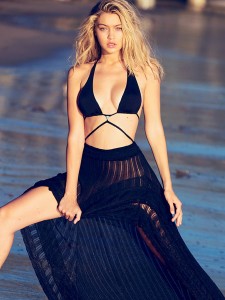 Just when you thought it was safe to go outside again, there was snow in Northern Ontario over the weekend. I guess we were spoiled by above zero weather. And I suppose there’s this WrestleMania thing happening in a week that’s a big part of this Sunday’s linkdump. I suppose that’s worth mentioning and covering on top of the usual stuff.

Anyway, it’s Sunday so it’s time for the links. Let’s kick things off with Gigi Hadid. I can finally understand why she was a frontrunner for this year’s SI Swimsuit cover.

Just to make things worse for the Republicans, it turns out that Obamacare isn’t too back for the creation of new jobs. (Bloomberg)

SXSW is ongoing right now. What is SXSW? No one’s really sure anymore. (Fusion)

Australian Prime Minister Tony Abbott was wearing an onion on his belt, which was the style at the time. I mean, here’s Tony Abbott eating a whole onion. (Washington Post)

The hockey world lost a pioneer with the death of CapGeek’s Matthew Wuest. (Sportsnet)

This week is WrestleMania week. I’ll see what interesting WrestleMania themed posts I can come up with for this week. Hopefully I can scramble something together for Friday. In the meantime, here’s a look at the seamstress who makes the outfits for some of your favourite wrestlers. (Vice)

Don’t forget that the Fed isn’t the only wrestling promotion in the world. There are all sorts of indie federations that will be near San Francisco / San Jose for WrestleMania. I don’t know if this company will be near WM31 but Think Progress took a look at a small Mexican lucha libre promotion. (Think Progress)

Another blow to the NFL. A former all-star player has been convicted of being a serial rapist. At what point does the NFL stop bouncing back from these PR disasters? (New York Post)

You’ve probably only watched TruTV during the NCAA March Madness tournament. So what’s on the other 11 months of the year? (Uproxx Sports)

How about one last bit of wrestling? Here’s a trailer for WrestleMania 31.