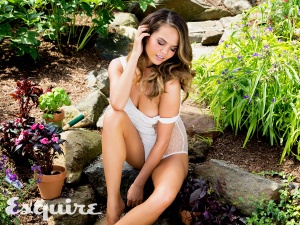 Hello and happy Sunday. There’s absolutely nothing new for you to look at today. Nope. Not at all. Any layout changes are a figment of your imagination… unless you’re reading tomorrow in which case you are seeing a new blog theme. Funny how that works.

Anyway, it’s time for us to do the links. Let’s kick things off with Chrissy Tiegen.

Is there a labour shortage in Canada? If you ask the Fraser Institute… who the hell knows because they don’t really understand the study they’re trying to do. (MacLean’s)

President Obama is being sued over signing “too many” executive orders into law but no one’s complained about his latest one. It’s a big piece of workers’ rights reform and it could be the biggest piece of legislation signed into law this term. (Slate)

Sponsored content in news publications seems like a new problem but is actually something that dates back many, many years. (Paleofuture)

First Nations are threatening protests and blockades if the federal government takes any action resulting from the public disclosure of band financial statements and council salaries. (Winnipeg Free Press)

Canadian political analytics blog 308 has a quick look at the Toronto mayoral election polls over the last little bit. Rob Ford’s still not out of it but his lost ground is John Tory’s gain. (ThreeHundredEight)

So @DogBoner posts a joke about Neil DeGrasse Tyson using his laptop on the New York subway and gets flamed for it. He actually had to explain the joke because people are terrible. (Gawker)

ZWR finally went to the zoo with Roy Halladay. (Zoo with Roy)

CFL jerseys have joined college football in jumping the shark. The Saskatchewan Roughriders have a new jersey that is all green and all painful on the eyes. (55-Yard Line)

OSW Review is back with a Brucie Bonus episode. It’s a rare adventure to the attitude era with a look at the UK-only pay-per-view Capital Carnage ’98.