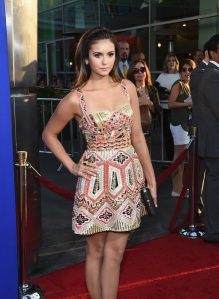 Let’s keep it short and simple this week. I am currently busy from the Melbourne International Film Festival screenings, so I’m a bit short on words this week in the ELO. Perhaps you can catch some of my updates from the film fest when I get around to posting them all! In the meantime, let’s kick things off with Nina Dobrev at the Let’s Be Cops premiere.

After the jump, imagine if GoT had a subway line, Bear Grylls tells us how to survive movie situations, watch Chris Pratt rap and finally catch Nina tackling giant beer pong with Jimmy Fallon.

If Game of Thrones took place in a modern day setting, this is what it would be like… on a subway map. (The Verge)

Bear Grylls on how to survive movie scenarios such as Sharknado! (Entertainment Weekly)

Miles Teller already starred in That Awkward Moment and later this year, he’ll appear in another hook-up rom-com Two Night Stand. While I like the cast, the trailer does seem to fall a bit flat. (MTV)

The Lonely Island have made some awesome tunes and hilarious music videos and now they’re going to get their own movie with Judd Apatow involved. Sounds promising. (Deadline)

The cast would love see a sequel to Galaxy Quest. I loved the movie, so I certainly wouldn’t mind! Would you? (MTV)

I’m a sucker for rom-coms and I am really looking forward to seeing What If. The new clips released highlights the awesome chemistry between Zoe Kazan and Daniel Radcliffe. (Collider)

Awesome crossover in the works between Arrow and The Flash. The best part? It is not what you’re expecting! (TV Line)

It might have been a stand-off between Marvel and DC but it looks like DC blinked first. Batman v Superman: Dawn of Justice has moved to March 2016. (Slashfilm)

Interesting note on a character that was meant to be revived in The Amazing Spider-Man 2 but the idea was dropped. (Badass Digest)

Ah-nold has revealed the title card for the new Terminator flick as principal filming has concluded. (Instagram)

Evolution of Chris Pratt from Everwood to Guardians of the Galaxy. (Bustle)

Daniel Radcliffe was just featured in Anna Akana’s latest video. It also acts as a little promo for his new flick What If.