Over the last four years, Formula One fans complained about the dull dominance of Red Bull and Sebastian Vettel as they won four-straight Drivers’ and Constructors’ championships with numerous race wins along the way. Before that, there was five straight years of Ferrari dominance with Michael Schumacher leading the way.

This season, things are shaping up to be worse than the Red Bull / Vettel years and approaching Schumacher / Ferrari levels of dominance. Lewis Hamilton won his fourth-straight race after retiring from the pole in the other race in what is shaping up to be a dreadfully dull year for Formula One.

Hamilton sat on the pole for the fourth time this season. He was almost two-tenths faster than teammate Nico Rosberg and over one second faster that third-fastest qualifier Daniel Ricciardo.

While Mercedes was tipped to win by over a lap in Australia, it was the fifth race of the season where Mercedes would most clearly assert their dominance. By the end of the race, only six cars were on the lead lap and the highest non-Mercedes AMG F1 car was 49 seconds behind Hamilton when the checkered flag fell. That’s the equivalent of pulling out a gap of three-quarters of a second per lap. 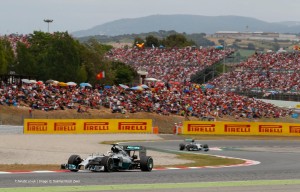 The race for the lead wasn’t particularly exciting until the very end of the race. On the prime hard tyres, Hamilton was quickly losing ground as the final stint reached its conclusion. Rosberg’s option medium tyres didn’t suffer the same graining issue that the hards were. Combined with two lap fresher tyres at the end, Rosberg’s gap went from five seconds to less than a second by the checkered flag. He reckons that he could have won the race if it was one lap longer but if ifs and buts were candy and nuts, we’d all have a Merry Christmas.

The only properly exciting part of the race was watching Sebastian Vettel claw his way from the back to the front. After a gearbox failure at the start of Q3 and the subsequent five-place grid penalty, he started the race in 15th.

After a rough start in which he tried desperately not to get taken out by the mid-pack runners in their own battles, Red Bull enacted a three-stop strategy for Vettel which allowed him to quickly vault through the field. After falling to 21st by being the first to make a pit stop, he took seven laps to carve through the field and into the points. By staying on fresher rubber than his competitors, he was able to continue moving forward before finishing the race in 4th.

The win was, as I mentioned, Hamilton’s fourth win of the year and fourth-in-a-row. It also allowed him to climb into the Drivers’ Championship lead over his teammate Nico Rosberg. Rosberg finished second on the day for his fifth podium of the season. Daniel Ricciardo finished third for the second time this year but this time, it counts… unless he’s disqualified again. That makes him the fifth different driver to finish on the podium

Sebastian Vettel climbed up 11 spots from 15th at the start to 4th. Valtteri Bottas continued his streak of points finishes with a 5th place. Fernando Alonso used a three-stop strategy to pass teammate Kimi Raikkonen as the Ferrari pair finished 6th and 7th respectively. Romain Grosjean parlayed a solid qualifying effort into the first points-finish of the season for Lotus. And the Force India boys rounded out the points with Perez ahead of Hulkenberg.

How do you keep news about Formula One money quiet? You release it during the random three-week break between races early in the season. 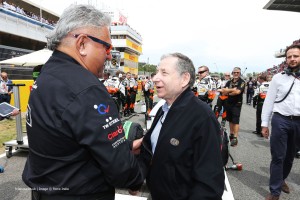 Formula One’s profits fell by about $137 million in 2013 as a result of a 6.1% increase in the prize money payments to the teams. The prize money pool paid out last year totaled $798 million as a result of an increase from 59.6% to 63% of earnings before interest, tax, depreciation and amortization (EBITDA for the accounting inclined).

In the end, reports say that F1 was still profitable to the tune of $286 million despite increased prize money, a higher rights fee to the FIA, $459 million of non-cash payments in intercompany loans and a race schedule that was one event shorter than the previous season.

Don’t feel bad for Formula One’s bosses. They still made $1.7 billion in revenue. Can I have just a tiny little bit of that?

Speaking of money, you’d think that someone at some point would realize that it costs more in terms of repair costs, aggravation, poor results, lost prize money and harmed competitive reputation to hire Pastor Maldonado than he brings in PDVSA sponsorship money.

This weekend, Maldonado had his second boneheaded crash in as many race weekends. He wiped out on pit lane entry in Shanghai in practice. This time out, he clattered the wall less than four minutes into Q1. Both crashing in pit entry and hitting the inside wall at Catalunya take an impressive lack of skill but we’ve come to expect such displays from Crashtor. That doesn’t include battering Marcus Ericsson in the race and earning a five-second stop-and-go penalty and a penalty point on his superlicense.

Shockingly, though, despite their worst season in years, Williams was still able to make a profit for 2013 thanks to Maldonado’s sponsorship. After including an estimated £15 million buyout payment from PDVSA to end their sponsorship of the team and terminate Maldonado’s contract, Williams made a £12 million profit. The previous year, the team lost £5 million.

Whether the team’s profitable ways can continue with Martini’s title sponsorship replacing PDVSA remains to be seen. Even without the PDVSA buyout, Williams would have lost less money in 2013 than in 2012. I guess the increase in prize money is helping the backmarker teams… Well, it’s helping a bit.

The next round of the 2014 Formula One World Championship is in two weeks’ time. It’s the traditional start to the Memorial Day motorsports tripleheader. Before IndyCar’s 500 mile race in Indianapolis and 600 miles in Charlotte, it’s the famed Formula One Monaco Grand Prix.

If any race can level the playing field, it’s going to be Monaco. Mercedes’ power and spending advantage is most obvious on track with long straights where high-speeds and quick acceleration is critical. On the streets of Monte Carlo, it’s all about grip.

Given that cornering speed and the grip to get power down will be the most important factor at this race, this is probably Red Bull’s best chance to threaten for a win. They’ve probably been the second-best team this season but haven’t looked like a winning team. I don’t think Mercedes is likely to be dethroned but here’s where they’re most vulnerable.