I’ve never played an MMO game before but was really interested in Star Wars: The Old Republic when it was first announced. After all, I love Star Wars and BioWare had never steered me wrong. Better still, the last time BioWare and LucasArts got together, we got Knights of the Old Republic which is one of my all-time favourite games and The Old Republic looked like the spiritual successor to the KOTOR series.

I didn’t buy SWTOR when it first came out, though. Spending $60 to buy the game and another $15 per month to play it wasn’t appealing to me. Over the course of a year, that would amount to $240 in costs which is the same as buying four games over the course of the year. Fortunately, in November, The Old Republic went free-to-play meaning you didn’t have to spend a penny to enjoy a new Star Wars experience. But is the SWTOR free-to-play experience worth it one year after launch?

KOTOR meets Mass Effect – The refinements to the dialogue and morality systems that BioWare introduced in the Mass Effect trilogy are here in TOR. Yes, BioWare is known for writing great stories and story was cornerstone of KOTOR. I’m just saying that the dialogue wheel and points-based morality system are things that BioWare tweaked in ME and brought back to Star Wars.

The story early on doesn’t seem as good as the original KOTOR but I’m not expecting KOTOR in an MMO. We start with something that’s maybe a bit more Dragon Age: Origins meets Star Wars meets Mass Effect with unique class origin stories and missions before joining the rest of the narrative. Still, it’s nice to pick up this game for free and still play through the story just like the subscribers and preferred status players.

Grouping With Other Players Is Fun – It was about a week before I formed part of a group of gamers. We were going through a dungeon, which SWTOR call “Heroic Areas,” when we banded together to make our lives easier going through it. It was pretty cool how a random bunch of folks joined up to help each other out. In a world where online multiplayer is usually competitive, it’s nice that a game that isn’t necessarily co-op sees players work together.

Most Restrictions Aren’t Terrible – I can completely understand why BioWare would restrict certain features to freeloaders like me. It costs them money to keep this game running so why should I get the same features as the guys who spend real money on micro-transactions or pay the monthly subscription fee be on the same level as I am? Having to pay more for item using in-game credits and levelling up at a slower rate is only fair. Having a lower priority is reasonable but doesn’t matter since I’ve not encountered a queue in the two weeks I’ve been playing. For the most part, the restrictions aren’t so bad that it’s not worth even playing for free. 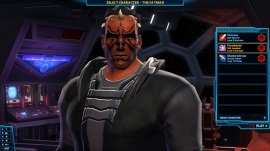 The Two Character Limit is Controversial but Not Terrible – When I started, I knew I was going to play for the Empire and I wanted a bad ass character. So I decided to go with the Imperial Agent class and be a scumbag gunslinger who wasn’t a bounty hunter (that just seemed too cliché). However, I didn’t find out until logging in the second time that I just used one of the two characters I can create. So much for playing force and non-force users from either side to get a feel for things.

However, like I said before (and is really the only thing I can cling to for justification as an MMO virgin), I don’t expect to get the same perks as a subscriber. If I enjoy playing through the Dark Side, maybe I’d be willing to upgrade to Preferred Status to get more characters and play a Jedi campaign. Two weeks into playing TOR is too early to make that call, however.

I Thought MMOs Were A Social Experience – If you are a free-to-play gamer in SWTOR, you quickly find yourself missing a key part of the MMO experience. Free-to-play gamers are only able to access the General Chat room on your origin world (the world where you start your game). It severely limits your ability to enjoy the social aspects of the game. Sure, you can still engage in your guild or groups chat room but half the point of MMOs seems to be playing with a team. It’s nearly impossible for free-to-play gamers to do given the chat restrictions. Free-to-play effectively turns SWTOR into a single-player game in an MMO shell. You need to upgrade to preferred

Some Feature Restrictions Are Ridiculous – Suppose you want to quickly make your way across a planet on foot. How do you do it as an F2P gamer? Very slowly. Sprinting is locked until you reach Level 15 and pay for the skill. That’s right. Moving quickly will cost you time and money. It doesn’t sound like much at first but watching another player move at something in excess of five times your speed is sort of demoralizing.

In addition to chat and sprint restrictions, you are also limited on inventory and credit capacity. If you want inventory/credit storage other than your backpack, you need to upgrade your status. You even need to spend real money to increase inventory slots rather than use in-game credits. I’d tell you how horrible the limits on “Operations” are but I don’t know what they are since F2P players don’t get any access without spending real money. You’re capped at five “field revives” for your character. It seems utterly ridiculous that I have a hard limit on that. Can’t I just buy more with in-game credits? No, I need to spend real cash for that too. And customer service? Don’t hold your breath.

But I Already Have An Origin Account – Are you already on Origin and have a friends list of people who you’d like to quest with in SWTOR? Well too bad! Having had a previously existing Origin account, I thought I could just use that to play TOR. It turns out that I was wrong. When I went on the SWTOR website to download the game for free, I had to create a new Origin account for the free-to-play. If I bought the game through the Origin store (which would make you a Preferred Status player), I probably would have been able to use my current Origin account. I can live with some feature limitation for free-to-play gamers but this seemed a bit ridiculous.

If you read comments of articles about SWTOR, there are a lot of people who characterize the F2P restrictions as punishing the players who go F2P rather than adding more features to reward subscribers. I didn’t get a beta invite to TOR or ever play WoW or buy the effectively free-to-play Guild Wars 2 so I don’t have a basis of comparison when it comes to how F2P systems and switchovers have been handled by other MMOs.

While I agree that I, as a fiscally responsible player (a polite way of saying that I’m unwilling to spend the equivalent cost of three games per year for full access to SWTOR), should not have as many features or as much freedom as subscribers, some of those restrictions are more punishing me rather than rewarding subscribers. (Especially those sprinting and chat restrictions.) Unlike MMO veterans, I just can’t get as worked up about a restriction system that I’m just not familiar enough with.

I can say that SWTOR is an interesting demo of an MMO. At its heart, the free-to-play version of The Old Republic is sort of like a demo. You don’t get all the features of the full game but you get enough to try to entice you to buy it. After my first week, I was ready to write this game off. After two weeks and about 20 to 25 hours of playing, things are picking up. So far, the story isn’t good enough to make me pay $15 per month to unlock all the features. Spending the $5 to upgrade to Preferred Status isnt’ out of the question. At least it would let me use chat…

Star Wars: The Old Republic is available on PC for Windows. This post is based approximately 20 to 25 hours of gameplay in the Imperial Agent class storyline as a free-to-play gamer. Your impressions will be different if you are either a subscriber or preferred status player.

10 thoughts on “Star Wars: The Old Republic Free-to-Play Impressions (or Free is Just Another Word for Nothing Left to Lose)”