I don’t think that I could do a list of the seven best games of the seventh console generation without including one game from this year. While a lot of our attention this year has been on the Xbox One and PlayStation 4, 2013 has been a spectacular year for games. Any one of a few games are more than worthy of inclusion on this list.

From the class of 2013, the best swansong for the now last generation of consoles has to be Grand Theft Auto V.

The Grand Theft Auto series is just as infamous as it is famous in gaming circles. You wouldn’t have expected it to become the multi-billion dollar gaming powerhouse that it has become after the first two games.

The first two Grand Theft Auto games (and GTA London 1969) were all top-down games which definitely not how most people know the series now. Those original games received mixed reviews with aggregated scores in the 70s but received praise for their audio and soundtrack, a GTA tradition that continues to this day. 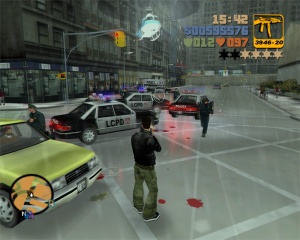 It wasn’t until Grand Theft Auto was able to make the jump to 3D rather than top-down 2D environments with the move to the next-generation of consoles. The open-world sandbox-style of gameplay, level of detail in the world and the general fun factor of Grand Theft Auto III turned the franchise from a little cult hit to a massive mainstream success overnight.

It might be a bit much to say that Grand Theft Auto III was a revolutionary game but its success, both at retail and with critics, caused it to influence game design going forward as more games adopted open-world and sandbox gameplay elements similar to GTA. Apart from maybe the Saints Row and Infamous series, no one has been able to do match Grand Theft Auto in terms of overall quality.

Without the success of GTA3, we might not be discussing this year’s critical darling and frontrunner for 2013 Game of the Year, Grand Theft Auto V.

While you would expect the developers to look to GTA4 as inspiration for their next GTA game, the folks at Rockstar North say they were more influenced by what the various Rockstar teams did with Max Payne 3 and Red Dead Redemption. Their work included fan favourite elements of those games along with improvements and innovations to those elements along with parts of GTA4 to make Grand Theft Auto V as good as it possibly could be.

The biggest change to GTA is the introduction of three player-controlled characters. Each has a different story, a different set of abilities and different missions to complete. The first character you meet is Michael, a former criminal who, despite having a terrible family life, is fairly well off despite being in witness protection. There’s Franklin, a gang banger and repo man who is introduced when he meets Michael while repossessing his son’s car. And, of course, there’s Trevor, Michael’s psychopathic former partner in crime turned meth cooker and dealer.

Over the course of the game, the three characters meet and begin planning and executing bigger and bigger heists. While they have their own story as a group, each has their own storylines. Michael has to deal with the emotional spiral caused by Trevor’s return that causing his family life to completely fall apart. Franklin’s dealing with his best friend who is being targeted by a rival gang member. And Trevor is trying to expand his meth empire.

The use of three player-controlled characters opened up the opportunity for a new mechanic. Grand Theft Auto V allowed players to switch between the three characters on the fly. The game helps you by indicating which characters need some help or have a strategic advantage in the current situation. It wasn’t just helpful for missions with multiple player characters but also allowed for some interesting moments outside of missions. Characters’ lives didn’t stop because you weren’t controlling them. They’d be off doing their own thing until you switched control over to them. It brought a sense of life to the characters and the world.

While the meat and potatoes of GTA5’s gameplay hasn’t really changed from GTA4, a bunch of gameplay features were added to the latest GTA adventure. The heists mentioned above have recruiting and planning elements before you even get into the proper heist. Beyond the storyline gameplay, a number of side activities have been added to make the open-world experience a bit closer to a real-world experience. Minigames included golf, tennis, base jumping, hunting and scuba diving. If that doesn’t strike your fancy, you could always try yoga, go to the strip club, invest in the stock market and buy real estate. Wait, is this a crime simulator or a life simulator with some criminal activity on the side?

While Rockstar’s RAGE engine (Rockstar Advanced Game Engine) has been used since the start of the console generation, the devs over at Rockstar were able to push the game’s graphics to the absolute limit what the PS3 and Xbox 360 could handle. Given their familiarity with the hardware, the team at Rockstar North were able to push the limit on draw distance, lighting and shadow effects and the detail in the environment. The result is a game that is a visual last hurrah for a console generation that might be long in the tooth but still had a little fight left in it.

In another first for the GTA franchise, Grand Theft Auto V was the first game in the series to include an original score alongside the licensed soundtrack. It was reported that over 20 hours of score was created for the game that plays during the single-player campaign and in the multiplayer. That doesn’t include the 240-plus licensed songs that the soundtrack included across 15 in-game radio stations and another two all-talk radio stations.

As you would expect for a big Rockstar game, the critics abolutely loved this game. GTA5 received near universal praise. The aggregated scored for both consoles are 97 on Metacritic and 97.01% and 96.20% on GameRankings for the PS3 and Xbox 360 versions, respectively. And while the awards season isn’t done yet, it’s picked up some major Game of the Year awards from the likes of Spike’s VGX awards and Machinima (Inside Gaming). 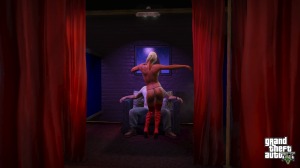 Of course, this being a Grand Theft Auto game, it certainly sparked a bit of controversy. A number of those same reviewers heaping praise on the game also criticized the game for what they called misogyny. They believed that the female characters in the game as stereotypes that had no consequence when it came to the heart of the game. Game director Dan Houser said that the portrayal of women was not inappropriate given that the game paints a picture of the criminal underworld. I suppose with any controversy, how you perceive something all depends on how you approach it. Is a stereotype within a stereotype proper portrayal of women within the established narrative framework? It all depends on your perspective. (Note that I’m not talking about a generally appropriate portrayal of women because that is a completely different debate that we should all be on the same side of.)

There was a more widespread controversy sparked by the “By the Book” mission. In this, Trevor interrogates a man while torturing. This is immediately preceded by a monologue talking about the ineffectiveness of torture in getting information out of people. It’s a meta-narrative moment that serves as political commentary against current US government policies regarding torture. Still, some reviewers and watch dog groups felt the content was generally inappropriate as it was tasteless and violent. Again, as with most any controversy, it’s all a matter of perspective.

While the free roaming, battles with police and team game modes were all back from GTA4, GTA Online tried to recreate the single player experience in multiplayer. Unlike IV, Online had the minigames from the single player available to play along with heist missions, real estate purchases, missions and integration with Rockstar’s Social Club which allows you to run with your own crew in Online.

While GTA Online had a very slow, very buggy start due to being overwhelmed by traffic at launch, things have now stabilized and Rockstar is rolling out updates and DLC to Online. With all the features available, I’d almost go as far to say that Online borders on being an MMO inside another GTA game. Despite the rocky start, this is the feature I’m most looking forward to when it comes to PC.

While GTA5’s legacy is still being written, it’s impact is already felt. It became the fastest selling game in history by topping $800 million in gross sales in the first 24 hours of release with an estimated units sold of 11.2 million. It crossed the $1 billion gross sales in three days. For comparison, the previous record holder, Call of Duty: Black Ops 2, managed $500 million in first-day sales and took 15 days to hit the $1 billion threshold. GTA5 also became the all-time franchise sales leader in only six weeks’ time.

While we can debate endlessly as to what the best game of 2013 was, what we can all agree on is that GTA5 was the last great game released for the 7th console generation. It’s a game that pushed the limits of what was possible on current generation consoles and set the bar for the next generation.