Error: Twitter did not respond. Please wait a few minutes and refresh this page.

The battle between Audi and Toyota for the overall victory was expected to come down to the difference between Audi’s raw pace and Toyota’s superior range on a tank of fuel. What it came down to, as it so often does at Le Mans, was luck and reliability. The #2 Audi of Tom Kristensen, Allan McNish and Loic Duval had the best luck and speed on the day’s worth of racing and picked up the win in the biggest event in sportscar racing.

Sadly, the win for Audi and the epic battle between Audi and Toyota was overshadowed by the first death in the 24 Hours of Le Mans since 1986 when GTE Am Aston Martin of Allan Simonsen died after a crash early in the race.

The race started with unexpected excitement that came from the Toyotas quickly jumping by the Audis to take the early lead. However, the excitement quickly turned to tragedy. On Lap 3 and less than fifteen minutes into the race, Allan Simonsen lost control of the car at Tertre Rouge corner and hit the Armco barrier. Simonsen’s death was confirmed by the ACO some three hours later.

After some of the massive shunts that we’ve witnessed over the last couple of years involving the P1 Audis and Toyotas, this impact looked relatively soft. However, the force of the impact was immediately evident. While the car was relatively intact, Speed Channel’s Dorsey Schroeder quickly pointed out that the car’s roof had twisted as if the frame had buckled under the impact. It doesn’t seem that severe considering that we’ve seen Audis disintegrate upon impact only for the drivers to walk away. We were hoping that it would be the same with Simonsen but it wasn’t to be.

The question that many will ask now is whether the car and track is safe and whether the race should have continued. The #96 Aston Martin GTE Am team had planned to withdraw from the race as a show of respect to Simonsen but his family insisted that the team carrying on as it would have been Allen’s wish. As such, it was only appropriate that the race continued. As for the car and track, I’m sure the track will look at upgrading the existing Armco barriers to something safer if available. Given that Tertre Rouge is the transition from dedicated race track to public roads, there isn’t much run-off room but that should be changed for next year.

As Steve McQueen said in the iconic film, Le Mans: When you’re racing, it’s life. Anything that happens before or after is just waiting.

As I mentioned at the start of the article, the LMP1 battle was shaping up to be a battle between the Audis’ raw pace and Toyota’s ability to go two laps longer on a tank of fuel. The performance equalization formula had given Toyota more distance between pit stops compared to the Audi. While the Audis would stop more, they were faster and Toyota’s pit stops would be slightly longer to add more fuel.

The Toyotas got out front early despite qualifying in 4th and 5th with a gap of four seconds to the pole time. Yet, before the safety car period, they were running roughshod over the Audi R18s. Before the race, Audi had said that they need to run at least one second per lap faster than the Toyotas to have a shot at winning. It sure wasn’t that way at first.

As the race went on, the pace that the Audis have shown so far this year came and put the trio of R18s up front with the two-time defending champion #1 Audi of Andre Lotterer, Marcel Fassler and Benoit Treluyer leading. However, Audi experienced an unexpected bout of trouble. The #1 car suffered an electrical problem that required a lengthy alternator replacement. At almost the same time, the #3 R18 suffered a right-rear puncture immediately after the start-finish line which meant an eight-mile crawl to the pits for a tyre and repair.

The last Audi standing was the #2 Audi piloted by Kristensen, McNish and Duval. A relatively trouble-free run put them out front. The only other car to not run into trouble was the #8 Toyota. However, the pace of the Toyota just couldn’t match that of the Audi as the race carried on. In a sprint and on cold tyres, the TS030s might have kept pace with the R18s but the #2 car had the long-run speed to score the fourth-straight Audi win at Le Mans.

For Kristensen, it was his record 9th overall win at Le Mans. Co-driver McNish scored his 3rd win while it was the maiden victory for Loic Duval. The #8 Toyota of Anthony Davidson, Stephane Sarrazin and Sebastien Buemi finished 2nd to score Toyota’s first Le Mans finish with the new hybrid car and first podium at Le Mans in a factory effort since their 2nd overall in the 1999 race. The #3 Audi of Marc Gene, Oliver Jarvis and Lucas di Grassi rounded out the overall and LMP1 podium.

The whole GTE Am story was overshadowed by the death of Simonsen whose team was one of the favourites in the category having lead the World Endurance Championship heading into the race.

The GTE Am story saw several cars run up front at some point over the course of the race’s 24 hours, including an unexpected stint at the front by Hollywood actor Patrick Dempsey. The actor, who famously plays McDreamy on Grey’s Anatomy, teamed with usual ALMS teammate Joe Foster and Porsche factory driver Patrick Long who collectively held the lead for a portion of the night before being spun by a passing LMP2 car  and the car later developing a misfire.

While it wasn’t Dempsey’s Porsche that won, there was another Porsche who stood atop the podium. The #76 IMSA Performance Porsche of Raymond Narac, Christophe Bourret and Jean-Karl Vernay won the race after dominating the class from the 11th hour onwards. Two AF Corse Ferrari 458s completed the GTE Am podium. The #55 of Pierguiseppe Perazzini, Lorenzo Case and Darryl O’Young led home the #61 of Jack Gerber, Matt Griffin and Marco Cioci.

As for the #96 Aston Martin that was teammate to Simonsen’s #95, the team soldiered on in their teammate’s honour but didn’t quite have enough speed to challenge for the win. They did come home a respectable 6th in class, five laps off the winning pace.

As usual, the battle for victory in GTE Pro was hotly contested. While the #96 GTE Am Aston Martin couldn’t challenge for class victory in honour of Simonsen, the GTE Pro trio were in contention for most of the race before each car ran into various issues that kept them off the top step of the podium.

The #97 and #99 cars were up front for most of the day with the #91 and #92 Team Manthey Porsche 911s in hot pursuit. The first GTE Pro Aston to blink was the #98 which blew an engine with less than seven hours to go. With five hours remaining, it was the #99 car that crashed out of the lead when driver Frederic Makowiecki couldn’t catch a tank slapper out of the first Mulsanne chicane and hit the Armco. The #97 was able to pounce and take the lead in the final few hours but too many pit stops dropped it from first in class to third. 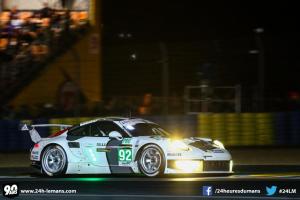 Up front, it was the #92 Team Manthey Porsche that had hounded the Astons all day that picked up the victory. They may not have been the outright fastest team but they certainly were the best over 24 hours. For drivers Marc Lieb and Richard Lietz, it was their third class win at Le Mans while co-driver Romain Dumas scored his second win. The #91 Manthey Porsche of Jorg Bergmeister, Timo Bernhard and Patrick Pilet finished 2nd in class, only two minutes behind the #92. The #97 Aston of Darren Turner, Peter Dumbreck and Stefan Mucke rounded out the GTE Pro podium but were only one lap behind the class winners.

The LMP2 category might not get as much attention as the battle in the bigger LMP1 cars but the field is so even that just about any car can win the race on any given day. 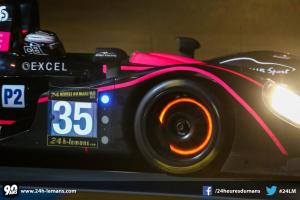 The race in LMP2 certainly wasn’t without excitement. Perhaps the most exciting moment was in the sixth hour when the #24 OAK Racing Morgan spun in front of the race leading #2 LMP1 Audi with the latter car missing a collision by inches.. That let the #26 G-Drive Racing Oreca through into the class lead. The lead didn’t last long because the #35 OAK Racing car managed to take the lead before the 8th hour was done.

From there, it was the two OAK Racing cars who dominated the running with the #35 car of Bertrand Baguette, Martin Plowman and Ricardo Gonzalez who took home the win in a one-two for their team. Their team car, the #24 Morgan-Nissan of OAK Racing driven by Olivier Pla, Alex Brundle and David Heinemeier-Hansson, finished 2nd. The aforementioned #26 G-Drive LMP2 of Roman Rusinov, John Martin and Mike Conway rounded out the LMP2 podium.