I’ve never been very good at poker. I’m sure most of that is as a result of inconsistent betting patterns that made it hard to manipulate people and not being able to maintain a poker face but I’m going to blame the cards. Fortunately, I only had the cards to blame in Telltale Games’ Poker Night 2.

Poker Night 2 isn’t really a game about poker but the characters you play poker with. You play a mute, unseen (from your first-person perspective) player which is appropriate given that the dealer is GLaDOS of Portal fame. Joining you around the table are Sam (from Sam and Max), Claptrap (of Borderlands fame), Brock Samson (from Adult Swim’s The Venture Bros) and Ash Williams (the Army of Darkness one, not the Mass Effect one).

There isn’t a lot of depth to the game. The AI is inconsistent. They’ll throw out big raises and all-in bets frequently to steal the pot (scare everyone away with big bets) and do this from the start. As a result, the games don’t last very long. I’d guess that I haven’t played a game that lasted longer than 15 to 20 minutes. 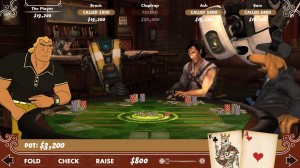 Unfortunately, while the dialogue and voice acting is good. It’s fairly limited. Inside my first two hours playing the game, lines were already being repeated. There aren’t even many variances on the call, raise, fold or win phrases. By the third hour, the short script started really showing. When GLaDOS makes a weight crack in three out of five hands, it’s a short script.

While the core of the game is poker, the purpose of the game seems to be the unlockables for the games tying in to Poker Night 2. You can get unlocks for Team Fortress 2 and Borderlands 2.

Normally, I’d make suggested area for improvement but the biggest one is the script. Double the length of the script and you have a far better game. Even if the poker isn’t great, we’re coming for the characters. Going less than two hours without repeating lines is bad. Having a third hour with 75% repeated lines is worse. 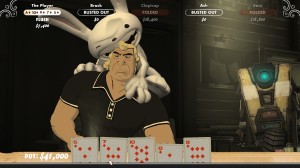 Poker Night 2 is really just a bit of fan service slathered on top of poker. It’s a funny game for a bit. If I stopped playing inside of two hours, I probably would have rated this higher. It just gets a little tired and repetitive if you spend a long time with it.

At the very least, it has a good price point. At $5 (or your local equivalent), there some value to be had if you’re a fan of any of the characters in the game. If you’re looking for a straight poker game, you’re best to look elsewhere.

One thought on “Poker Night 2 Review (or The Small Blind)”