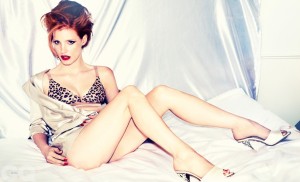 Have you been reading Scott’s list of the Top 45 Movies of 2012? If you haven’t, you’re missing the most thorough breakdown of the year in movies that I’ve seen. Today, he’s dropping Part Three which covers #15 to #1. Therefore, I thought it was fitting to lead off this linkdump with actress Jessica Chastain.

Blue Brothers is one of the all-time great comedies. This oral history looks at how the movie almost never got made. (Vanity Fair)

If comedies aren’t your speed, maybe you’d rather read about Ben and Matt got their big breaks with Good Will Hunting. (Boston Magazine)

Okay, so Notre Dame got hilariously beaten by Alabama for the BCS Championship. My question is whether they even deserved to be there. After Penn State was nearly sanctioned out of existence for the Jerry Sandusky affair, the Notre Dame rape scandal was swept under the rug allowing them to get within one game of a national championship. (The Nation)

After the jump, did Dalhousie women’s hockey get screwed out of a season, Tony Bourdain vs. Travel Channel and a montage of montage.

The Dalhousie women’s hockey team was suspended for the year after a hazing incident. However, a player says that the incident was not what it was made out to be and thanks to players being forced into signing a confidentiality agreement, the truth may never come out. (Dal Gazette)

Rob Parker was let go by ESPN after calling Robert Griffin III a “cornball brother.” His cause wasn’t helped by an interview with NBC Detroit. (Awful Announcing) You should read and re-read the part where ESPN and First Take producers effectively endorsed Parker saying controversial things to get attention.

God help us. Ryan Lochte is getting a reality show. (With Leather)

The merged Grand-Am and ALMS series announced its class structure. Interestingly, LMP2 and DP will be in one category and will be the top class in the series. (Speed Channel)

Cheap plug for my new geek culture blog. I examined the upcoming The Walking Dead: Survival Instinct video game. The problem with it is that it looks like Activision cashing in on a hot license. (et geekera)

Speaking of terrible things, here’s a well-written column about why Seth MacFarlane is terrible. (Smosh)

Speaking of food, here’s a list of 20 things everyone thinks about food culture but doesn’t say. (First We Feast)

Doing some training? That needs a montage of MONTAGES!

One thought on “Wednesday Link-Off: A Week at the Movies”