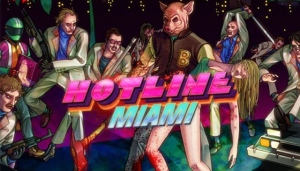 November’s Steam sale was every bit as great for me as a gamer as it was bad for my wallet. I bought far too many games but I went out of my way to buy what reviewers said were the best games. That’s why I bought Hotline Miami. It’s a well-reviewed game with some nostalgia for those of use who played classic Grand Theft Auto games. I’ve never been one for excessively violent games so I thought I’d give it a try to see what the hype was about.

If you haven’t played the first two Grand Theft Auto games, you wouldn’t recognize them as being part of the same series as the games from GTA 3 onwards. In the days before GTA 3 and massive 3D world of death and destruction, GTA was a top-down game of death and destruction. Hotline Miami looks and feels like an homage to the top-down style of vintage GTA games but with the gratuitous violence cranked up to 11.

Gameplay is fairly simple on the face of it. Kill all of the enemies in a level and move on. You can do this with your fists, melee weapons (baseball bats, knives, etc.) or firearms (assault rifles and shotguns). However, the AI is pretty smart. They’ll attack you if they see you. When shooting starts, everyone on that floor can hear it. If there are a dozen enemies in a level and you kill the second one using a shotgun, you’ll find yourself quickly outnumbered by gun-toting henchmen. Going Rambo may sound like a good idea but it has it’s time and place. Studying enemy movement and employing a mix of stealth and combat tactics is the key to success.

In keeping with the retro design of the game, you don’t really have health. It’s one hit and you’re dead. It doesn’t matter if you take a baseball bat to the skull or a shotgun blast to the back, once you get hit, you’re dead. That can be extremely frustrating after you think you’ve cleared a level only to have a henchman sneak up from behind you and unload an assault rifle into you. 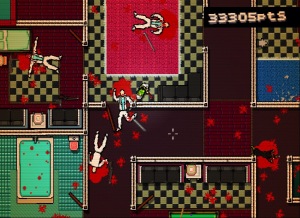 As I mentioned earlier, classic GTA was a top-down game. Hotline Miami has that visual style, complete with retro-quality (occasionally described as 16-bit) graphics, it looks much more violent. You’ll beat enemies brains in or leave their blood soaking into the floor in order to kill them and the game isn’t afraid to show blood.

The sound in this game could best be described as loud. The music is loud. The sound effects are loud. The thing is that it all seems to fit perfectly with this game. Everything about Hotline Miami is over the top in a fun way. That includes the sound. The music is reminiscent of 16-bit music but that fits with the retro façade this game puts up. 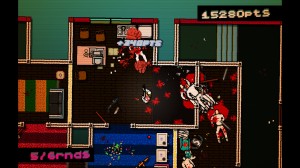 Hotline Miami is a fun little game that can be best described as frustrating but rewarding. If you can deal with dying repeatedly, you will love this game. I really think it’s for older gamers because this game is more like the games I grew up with rather than the games that today’s teens who are content never venturing outside the Madden and CoD bubble grew up with.

I’d like to tell you how long this game is but I just can’t get a hang of it. As of writing, I’m stuck on Chapter 4 of over 20 chapters. Even though I’m stuck in an early part of the game, I don’t resent it for being difficult. That’s part of the charm of Hotline Miami. It’s not the easiest game ever made but it’s still great value for money… Even if you only make it to Chapter 4.

Hotline Miami was reviewed on Windows PC. It is available for purchase through Steam.