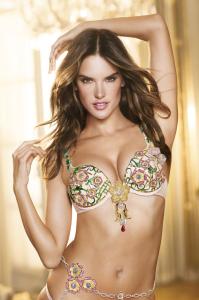 Just to show how up-to-date we are, we have links about the last debate the day before the next Presidential election debate. But before we get to the links, making an all too rare appearance on the blog, here’s Alessandra Ambrosio who was selected to model this year’s multi-million dollar Victoria’s Secret bra. I wonder if Ann Romney owns any of those?

Like I said in my last linkdump, we’d have to wait for proper debate breakdowns. So let’s start with this analysis of Obama’s bounce-back performance in the second debate. (The Daily Beast)

One of the big memes to come from the debate was Mitt Romney’s binders full of women. However, rather than becoming a meme, that statement should be used as a jumping off point for Romney’s apparent lack of interest in women’s issues like pay equity and women’s rights. (The Guardian)

After the jump, Romney’s profit from the auto bailout, photos from the Red Bull space jump and US presidential debates are a broken system.

One more thing about Romney’s binders. His staff didn’t put them together. A non-partisan group put it together for him. (The Phoenix)

Mitt Romney was against bailing out the auto industry but he sure won’t complain about it happening. Mittens and friends made more than a few bucks thanks to the government. (The Nation)

Why are so many employers suggesting to employees to vote Romney lest their jobs be terminated? Because Mitt himself gave them the idea. (In These Times)

What do the candidates body language say to voters? (New York Times)

The NHL lockout hasn’t just put the players out of work. It’s also claimed one of the league’s top reporters. (Deadspin)

The woman who A-Rod was flirting with during the ALCS has been identified. The woman was an Australian bikini model who may have gone on a date with A-Rod after the game. (Sportress of Blogitude)

This week in With Leather’s Sports on TV, it’s Mighty Morphin’ Power Rangers. (With Leather)

Somebody made a mod to Sins of a Solar Empire to create a Mass Effect space combat strategy game. (Kotaku)

And let’s close up with a look at some photos from Felix Baumgartner’s Red Bull Stratos jump. (Twisted Sifter)

Before tomorrow’s debate, ask yourself if the debate system is broken.

Before last week’s debate, Jimmy Kimmel asked who won the debate. It turns out that no one knows shit.

Snoop Dogg is now doing parodies of his own songs for ads. Here’s Pocket Like It’s Hot. I didn’t know they still made Pizza Pockets.