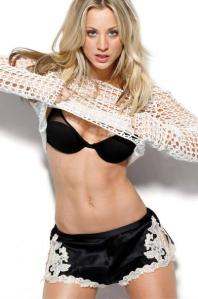 It’s time for another edition of the Entertainment Link-Off. Starting off this entry is Kaley Cuoco. You can hear her voice work in the new critically slammed animated film Hop, but I’m sure we’ll all be better off watching Source Code in theatres instead this weekend.

After the jump, news on Transformers 3, watch the first six minutes of Sucker Punch, Katherine Heigl causes havoc in the movie industry, Tara Reid tries to show off her acting chops and a funny look at Korean dramas.

So much for retirement, it appears that Leonard Nimoy will be the voice behind Sentinel Prime in the upcoming Transformers: Dark of the Moon. This marks the actor’s second time voicing a robot in disguise as he has previously did the voice of Galvatron in the 1986 animated film. Glad to know that Michael Bay is going all out in the third film of the live action franchise. (Entertainment Weekly)

Some new images from Transformers: Dark of the Moon. Sadly, no robot sightings in these ones. (Collider)

Don’t believe those reports out there saying that Kick-Ass 2 is in development. As of right now, nothing is happening and we shouldn’t expect to see it hit theatres anytime soon. (Slashfilm)

I’ve always enjoyed reading reviews from Roger Ebert. Agree or disagree, he is a good movie critic. Well aside from his usual day job, turns out that he can also predict the future! Digging up a past interview from 1987, turns out he accurately (for the most part) predicted the state of movies today. (LA Times)

After the promo pic for NBC’s Wonder Woman was released to little to no fanfare, some edits were made to the not-so-impressive costume. Sure, the latest pics of Adrianne Palicki in action does seem to look better, but is it just me or does it look like a wardrobe malfunction waiting to happen? (SFX)

Since Sucker Punch was a critical and box office dud, Warner Brothers is now desperate to make back its $82 million budget. In an attempt to get more people into the theatre seats, here’s a chance to watch the first six minutes of the film online. (Thompson on Hollywood)

An interesting read. Zack Snyder’s intention may have been to empower women in his latest film Sucker Punch, but he may have just fallen short of that… (Slashfilm)

I was actually looking forward to Joseph Kosinski’s sci-fi actioner Horizons (formerly known as Oblivion). Sadly the project is dead at Disney, but the good news is that due to the strong relationship between the studio and the director, he is now shopping it around. Let’s hope it does get made at some point! (The Hollywood Reporter)

Baseball season is here and there is no better way to kick it all off with 30 films that featured 30 MLB teams! (Movieline)

Got Milk? I mean… Got Modern Family? (TV Line)

Now that Ah-nold Schwarzenegger is no longer the governor of California, he’ll now officially become The Governator… in cartoon. (Entertainment Weekly)

Executive producer of How I Met Your Mother, Craig Thomas reflects on the many love interests of architect Ted Mosby. (LA Times)

Katherine Heigl may have caught her big break with Grey’s Anatomy. Now that she’s dropped the show like a hot potato, she goes around making crappy romantic comedies. Yeah that sounds like a brilliant career move. So what would happen if a freak accident led to 34 of her films all at once? Let’s just say it’s going to be a disaster of epic proportions.

Speaking of actresses with a career on a downward spiral, let’s take a look at Tara Reid. The actress talked about how The Big Lebowski 2 was in development a few months back. We all knew it wasn’t going to happen and even the Coen brothers got a good chuckle out of that report. Now the trailer for the ‘film’ has been released and Tara Reid attempts to display how great of a thespian she is… or not.

The Big Lebowski 2 with Tara Reid from Tara Reid

Best cover of Friday ever all thanks to Chester See??? YES! Just for that hilarious ending.

Finally, Korean dramas are known for its excessive melodrama… but here’s a hilarious take on it from Wong Fu Productions.

2 thoughts on “Entertainment Link-Off: Swing and A Miss”