One of the great perks that comes with a Sports Illustrated subscription is getting the mid-winter classic known as the SI Swimsuit Issue. Last summer, models were secretly whisked off to tropical locales all over the world and photographed in complete secrecy… Well, at least when Twitter and Facebook didn’t give us sneak peaks of what to expect. Anyway, shrouded in even more secrecy is the identity of the magazine’s cover model. Being the SI Swimsuit cover model is probably the highest honour that can be bestowed on a model. It comes with instant celebrity, international recognition, a blogosphere presence for life and a blown-up copy of your cover in the studio of a certain SI-associated nationally syndicated radio/TV show hosted from Connecticut.

So who are we tipping to be on the cover of the 49th edition of the Sports Illustrated Swimsuit Issue? Find out after the jump. 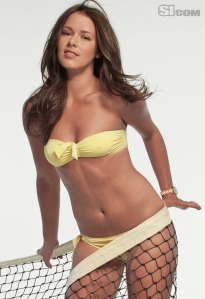 99-1 Random Non-Model
Back in 2007, Beyonce was on the SI Swimsuit cover which made her the first non-model to get the cover spot. In recent years, SI has put musicians, athletes, actresses, WAGs, Dancing With The Stars dancers and cheerleaders in the magazine so they could end up putting one of them on the cover of the magazine. But just because it’s happened in the past doesn’t mean that it will this year. Also, no athlete has ever covered the Swimsuit issue (apart from an inset).

50-1 Candice Swanepoel
I’m going out completely on a limb here. I realize that she’s never been in an issue of the Swimsuit Issue nor has she been rumoured but SI has a history of using Victoria’s Secret models in the issue and on the cover. Swanepoel is probably the hottest/fastest rising star among the VS Angels so it wouldn’t be inconceivable for her to make the cover. I’m not sure the last time a Swimsuit rookie (excluding Beyonce) made the cover so that hurts her chances. Also, Wikipedia bills the three cover girls who also were Angels (Tyra Banks, Heidi Klum and Marisa Miller) as American (in Klum’s case, German-America). History doesn’t seem to be on the South African Swanepoel’s side. But she was recently on the beach for a photo shoot. There is a possibility.

40-1 Kim Cloutier
Once again this year’s homer pick is fellow Canadian Kim Cloutier. She didn’t make the cut in 2010 after being in the 2009 Swimsuit Issue but I still think she has a better chance of making the cover than Canada’s 2010 Swimsuit rookie Zoe Duchesne. Unlike Zoe, Kim keeps popping up here and there on the internet so she’ll still be a reasonably recognizable face for most readers. Besides, last year’s rookie class wasn’t exceptional  (with one exception noted below) so why not look to 2009 for 2011’s Canadian content. That and she was ranked at #5 on some viewers’ choice Top Ten video which has to count for something.

20-1 Genevieve Morton
Well, I mentioned that there was an exception to 2010’s mediocre rookie class and this would be it. Genevieve was head and shoulders above the rest of the last group of first-time Swimsuit Issue models. The last time a rookie went on to cover her second appearance in the issue was in 2005 when Carolyn Murphy graced the cover so this move wouldn’t be without precedent. But our last three cover girls (Marisa Miller, Bar Refaeli and Brooklyn Decker) made three, two and five appearances, respectively, before covering the issue.

15-1 Cintia Dicker
The Brazilian red-head has appeared in the Swimsuit issue twice but definitely hasn’t gone unnoticed. She hasn’t made near as many appearances as the next girls on the list either in the Swimsuit issue or elsewhere in the modelling world. She was easily top of the 2009 rookie class and I would figure that she’s going to be a mainstay of the issue for a couple more years. History isn’t on Cintia’s side, though. Only one Brazilian model has made the cover. That was Maria Joao in 1978 whose cover led to the most cancellations and letters regarding a cover in SI history.

10-1 Julie Henderson
Julie has made four appearances in the Swimsuit issue and it seem to be relatively on pace with most of the recent cover girls for her to make the cover in her fifth appearance. Her profile has dropped a bit relative to some of the other women on the list. After breaking up with Aaron Rodgers, she lost her WAG credentials which lowered her public profile on the interweb. Still, I don’t think you’d find anyone complaining if she makes this year’s cover. It’s also worth noting that she’s the only one on this list who has been confirmed to be appearing in the 2011 issue.

9-2 Irina Shayk
Irina seems to be everywhere lately. While some of that has to do with the obvious, I’m sure most of it is because of her looks. Oh, the obvious is the fact that she’s dating Christiano Ronaldo. I’m not a fan of his but you have to respect his taste in women. Anyway, she has four previous Swimsuit appearances under her belt and combine that with her high profile and you have someone who is almost certain to make the cover of the Swimsuit issue at some point. She was on the cover of one of the 2011 Swimsuit calendars with past cover girls Decker and Refaeli on the others. And despite all that, I’m just not completely sold as her being right for the cover.

4-1 Anne V
Apparently, Anne V (full name Anne Valitsyna) has made more consecutive appearances than anyone else in the history of the Swimsuit Issue. Whether or not that’s true, her six consecutive appearances in the issue would make you think that she’s due a cover appearance. While she may not be the biggest name among the last five sets of models, SI and/or the fans like her enough that she keeps coming back. If you compare her to Shayk (everyone else’s cover pick), I think she looks more like an SI cover girl. Add to that the fact that “insiders” were picking her as the likely 2011 cover girl at the 2010 release party and you have our favourite to cover the 2011 SI Swimsuit Issue. That and some guy in the comments of our 2010 odds post said he had $50 on Anne V so this should make him happy.

Obligatory Legal-ish Disclaimer: This post is for entertainment purposes only. If you gamble your money based on the ramblings of a man who’s never bet a dime in his life, it’s your own damn fault. Hell, he doesn’t even know who will be in the issue in the first place.