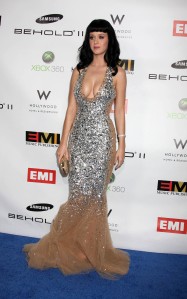 It has nothing to do with movies but I think Katy Perry had to have been nominated for a Grammy.

The Oscar nominations were announced this week. To no one’s surprise, it was Avatar that led the way. (New York Times)

But the Oscars bore more than paint drying. No, the real money is at the Razzies. Transformers: Revenge of the Fallen, which is Jackie’s favourite movie of all time, led the way there. (Daily Telegraph)

And it’s the best of the worst movies of all-time. Despite the love for Up in the Air, George Clooney’s turn as Batman is hated worse than Ben Mulroney. (CBC)

After the jump, something, something else, and it’s John Cleese Idol with Ben Mulroney.

I’m putting together a largely Super Bowl themed linkdump tomorrow but for today, here’s what would happen if Anthony Bourdain did his show at the Super Bowl. (Kissing Suzy Kolber)

Do you hear that sound? That’s the sound of Jackie’s heart breaking. (US Magazine) If you’re in Australia, you’re probably now deaf.

We all knew that the 3D craze would lead to this. This industry backed the winners in the VHS/Beta and Blu-Ray/HDDVD wars so it looks like 3D is here to stay. (Film Drunk)

I know I’ve probably declared the biggest winner of the Conan/Leno/NBC fight before but I know who the winner is. It’s Jimmy Kimmel. (Next Round)

What do you need for the ultimate home poker room? Here are 18 things that you should drop your money on. (Poker Junkie)

Not entertainment related but still entertaining. It’s the Top 10 gun-related nicknames in the NBA which is also David Stern’s worst nightmare. (A Stern Warning)

Canada’s women’s curling squad is wearing some sexier curling garb at the Olympics. That’s the first time that “sexy” and “curling” will ever be used in close proximity without Jennifer Jones also being involved in the sentence. (Fourth Place Medal)

What will Canadian soldiers do to deal with hockey withdrawal? They setup their own hockey league. (AP/Yahoo)

Today’s photo gallery is an early look at the new NBA Jam. Too bad it’s only on the Wii. Maybe the good folks at Nintendo will send a Wii to Lowdown HQ. (Kotaku)

For no reason at all, here’s John Cleese who cements his status as a Canadian hero in this sketch.

This has to be one of the weirdest/most hilarious videos of all time. A senior citizens church choir does hip hop. It blows my efforts as a rapper out of the water.