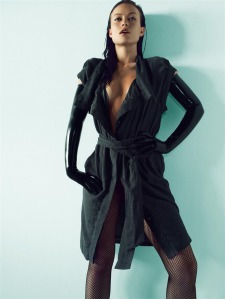 Here’s Olivia Wilde. You can understand why Megan Fox would strangle a mountain ox to be with her.

Christiano Ronaldo is now a fan favourite of Man United fans. They got all that money for him and now he’s down with an injury… Caused by a sorcerer… Hired by Paris Hilton… You just can’t make this shit up. (The Spoiler)

Have we mentioned that the CBC has ripped off “Dancing with the Stars”? It’s called “Skating with the Stars” “Battle of the Blades” where retired hockey goons jump and twirl while beating the shit out of each other or something. (Deadspin)

Brock Lesnar isn’t what we thought he was. I think his next opponent will find out that taking a shot from a steel chair would be preferable to what will happen in the octagon. (Yahoo Sports)

It’s the 40th Anniversary of the debut of “Monty Python’s Flying Circus” on the BBC. There’ll be reunion shows in New York and a new movie. (Bloomberg)

ESPN’s 30 for 30 documentary series kicked off with FNL’s Peter Berg’s doc on the Wayne Gretzky trade. It might have been a case of more sizzle than steak. (The Big Lead)

Speaking of ESPN, their favourite baseball team seems to be well on its way to a long run in the post-season. Not everyone is happy that the Yankees are back in contention. (The Legend of Cecilio Guante)

And if you thought ESPN’s coverage tended to lack something, the only was it could be worse is if Chip Caray was working for the mothership. (New York Times)

Is it okay to link to a collection of kids getting demolished on the football field? I figure that if Hollywood can glorify that sort of football violence in Little Giants, I think we can here. (Super Tremendous)

How important are rivalries in college football? Well, the Little Brown Jug (awarded to the winner of the Michigan/Minnesota game) is the oldest trophy in all of football. How well do you know your football trophies? Take the quiz. (Simon on Sports)

Obviously, I’m a huge Big Ten fan (especially of the Michigan Wolverines). However, there are a few reasons why I hate not being able to get the Big Ten Network. (Sports Bank)

Today’s photo gallery brings you gratuitous amounts of eye candy. It’s a list of the Top 100 women of the 2000s. (Complex)

Christian Bale, eat your heart out.

And who doesn’t love a good faceplant? Or fifty?

2 thoughts on “Sunday Link-Off: Fight It Out”