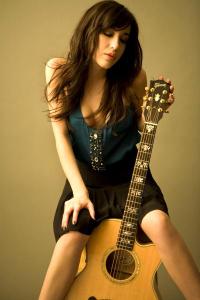 Alright, so I finally got my hands on Kate Voegele’s latest album “A Fine Mess” last weekend despite the fact that it came out in May. I might not the be the first one in line to pick up merchandise, but I do end up supporting the artists I like. This album has been on full rotation in my CD player all week. It truly is a fantastic record. More on that later on…

Before I jump into the entertainment articles, let’s start off with something tied into last night’s brilliant Stanley Cup playoff game. Damien Cox writes about the unsung heroes of the Stanley Cup winning squad. (The Toronto Star) Once again, congratulations to the Pittsburgh Penguins for winning the cup.

After the jump, some TV scoop, lots of movie news and two celebrities that may have more in common than we thought.

Still bitter about Reaper’s cancellation? Allow Ms Jenny Wade to talk to you about the show. (Youtube)

Just for kicks, it seems like Christian Bale and Kermit the Frog has more in common than we thought! (ferdalump @ Livejournal)

ABC is going to have a huge presence at Comic Con this July with a huge batch of shows doing panels there. Meanwhile NBC’s Heroes is not doing a panel at the event this year. Given the creative downward spiral, I’m not surprised. Meanwhile, Dollhouse is taking over Ballroom 20 for 2 hours during their panel which includes a screening to the unaired episode ‘Epitaph One’. Times like these make me wish that Comic Con takes place in Toronto instead. Looks like I’ll have to find a way to fly over to San Diego. (Chicago Tribune)

A show that will make a splash at Comic Con is cult fav Supernatural. Jensen Ackles talks about the upcoming season and whether there would be a sixth season. (E! Online) Executive producer Eric Kripke only planned out the show for 5 seasons and that’s it. While I believe there is room for more stories, I would prefer to see the show get a natural end and go out on a creative high. Why do I get the feeling that Dawn Ostroff and her brain-trust will extend this show beyond its natural life and ruin the awesomeness that constitutes Supernatural?

Heidi Montag Pratt is currently hospitalized… or is she still on I’m A Celebrity Get Me Out of Here? Oh who the heck knows… and frankly I don’t care. Anyway, her continuous ‘overexposure’ continues as it is confirmed that she has posed for the September issue of Playboy. Hurray for more silicone goodness (gag me)! (People)

After a nice round of coffee, everyone is going for another fix of The Hangover. Even the Denzel-Travolta powerhouse couldn’t take down the raunchy comedy. In other box office related news, the string of Eddie Murphy duds continue! (Box Office Prophets)

X-Men Origins: Wolverine may have sucked, but it didn’t mean that it couldn’t generate more positive attention towards some of its cast members. Taylor Kitsch and Lynn Collins have been casted in John Carter of Mars! (Zap2it) Taylor Kitsch is a good actor and he’s slowly becoming a big star. He deserves it. Keep on representing Canada! Anyway fear not FNL fans, Kitsch did mention that he will continue to stay on the show as long as they writers want to keep him around. He is due to appear in the 4th season that is airing this fall on DirecTV (summer 2010 on NBC).

One of the few things that Wolverine got right was the casting of Ryan Reynolds as Deadpool (despite the fact that the story just ruined his character in the film). He fits the role perfectly and I can see a franchise built around him in the very near future. In the meantime, Reynolds talks about the spinoff. (MTV) I might seem a little too optimistic, but it does seem like the film might turn out to be good.

The countdown towards Transformers: Revenge of the Fallen continues! While the anticipation builds, check out the latest Megan Fox spread at EW. (Entertainment Weekly)

We all know that James Cameron’s next epic Avatar will be a game changer in the movie viewing experience. It seems like he is also trying to alter the videogame biz while he’s at it. (Variety) The details of the film may be shrouded in secrecy but you can get a better idea of what this film is about by clicking HERE!

Descend into this article to see who might be directing the Predator reboot. (Bloody Disgusting). If this is true, I am so pumped for it!

While we have a fair share of big budget summer blockbusters that are coming out, there are smaller films that deserves some attention. Joseph Gordon-Levitt (you may recognize him from 3rd Rock from the Sun) may be appearing in a possible crapfest like G.I. Joe, but he will also be starring in a clever gem called “500 Days of Summer”. Check out the international trailer. (Trailer Addict)

There are moments in our lives when our expectations and reality diverge. Check out this brilliant clip from “500 Days of Summer” that clearly illustrates this situation. (Slashfilm)

Robert Schwentke’s big screen adaptation of The Time Traveler’s Wife has been sitting on the shelf for over a year. The release date was pushed back constantly and it is finally hitting the silver screens on August 14th. I liked the novel and I’m looking forward to the film adaptation (though we all know that the books are usually better). In the meantime, check out the trailer here.

And finally, a little more on Kate Voegele’s “A Fine Mess”. 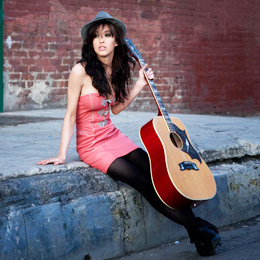 Despite the fact that she’s appearing on a mediocre series like One Tree Hill, Kate Voegele is a talented singer/songwriter and she deserves the additional attention generated from the show. Like her debut album “Don’t Look Away”, Kate continues to display her stunning vocal abilities and songwriting skills.

In the 14 song set (9 if you purchase the regular edition), there is a lot to offer as it ranges from angst driven tracks like “99 Times” to catchy songs with awesome pop hooks like “Angel”. The album also offers a bit of variety with the bluesy song “Talking Smooth”. There are also some nice inspirational tunes like “Life Me Up” and “Sweet Silver Lining” to give more opportunities for fans to relate to her music.

The thing is, the A Fine Mess isn’t messy at all. It’s a nicely produced album thanks to producer Mike Elizondo. The nice mix of gritty guitar tracks and beautiful piano songs leaves a deeper impression compared to her debut album. However, like the first album, she doesn’t stretch very far from her boundaries. It’s not necessarily a bad thing. Why mess with something that works right? It may take a few more album for Kate to make a huge mark in the pop act, but in the meantime, enjoy the songs that she has to offer. They’re actually good.

Highlights: Inside Out, 99 Times, Angel, Sweet Silver Lining, Lift Me Up, Unfair*, Forever and Almost Always*

* = can only be found in the deluxe version of the album

One thought on “Entertainment Link-Off: A Fine Mess”