Naughty Dog has a reputation for making a trilogy of games (and sometimes a racing game) for a franchise on a console generation and moving onto a new IP. They did it with Crash Bandicoot on the PS1 and Jak & Daxter on the PS2. Their PlayStation 3 trilogy was the blockbuster Uncharted franchise (along with the amazing The Last of Us). However, in their first effort on the PlayStation 4, Naughty Dog went back to Uncharted for one more adventure with Nathan Drake in Uncharted 4: A Thief’s End.

Just coming to market, Uncharted 4 was a controversial game. There were a number of high-profile departures from the game over its development. Uncharted director and creative director Amy Hennig and game director Justin Richmond left during the production of the game. They were replaced by The Last of Us directing duo Neil Druckmann and Bruce Straley. If you were worried that swapping the team leads for Uncharted in the middle of production would harm the end product, you’ll be happy to know that this game is as good as the trilogy that preceded it.

That being said, it’s not like the change in directors resulted in Uncharted 4 becoming something akin to The Last of Us 2. While a lot of elements from TLOU find their way to Uncharted, this is still an adventure about treasure hunting (but with the supernatural elements of the last three games omitted) but friends and family form the core of the story. Granted, this is a common thread in all Naughty Dog games but it’s a bit more prevalent in Uncharted 4 thanks to flashbacks and optional conversations along with the usual cutscenes and dialogue that you get in Uncharted games. 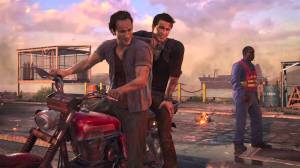 On the other hand, the change in directors might have resulted in what feels a bit like retconning in the character of Sam Drake, Nathan’s long-lost older brother. Nate has ever mentioned the existence of a brother or his importance until Sam showed up at Nathan’s workplace. (The review title “The Last Crusade” isn’t just saying that this might be the last Uncharted game but because the handling of Sam is similar to that of Dr. Henry Jones Sr. in Indiana Jones and the Last Crusade. After Uncharted 3, Drake and Elena finally got married and Nate retired from the adventuring life for a civilian life of washing dishes and working for a salvage company. Of course, since this an Uncharted game, the slow start quickly gives way to an adventure on a grand scale.

While the Sam Drake character isn’t a bad one, he’s not exactly a compelling one. He is forced into Nate’s backstory as the one who inspired him to go on his adventuring lifestyle. Their pursuit of Captain Avery’s treasure (the focus of this adventure) was always the family goal, not Sir Francis Drake or El Dorado. Nate and Sam were the original adventuring duo with Sully being an associate. You have three flashback chapters to buildup the importance of the relationship between the brothers. It almost retroactively de-values the Nate and Sully relationship that drove Uncharted 1 and 3.

However, once the adventure starts and familiar characters come along for the ride, it’s classic Uncharted. There are a couple of twists from the usual formula. Drake is trying to do right by the world with his adventures but he’s out to save his brother from a ruthless drug lord who is broke Sam out of jail in order to bring him the treasure. There’s no supernatural power that needs to be kept out of the hands of an evil doer.

It’s a very personal adventure for Nathan and Nolan North is tasked with creating this relationship and making us believe that it matters. Fortunately, he’s Nolan North so he does a pretty good job. Retcon notwithstanding, it’s the relationship between Nate and Sam that carries most of this game and makes you want to drive forward. Granted, the action and adventure will make you want to push forward too. 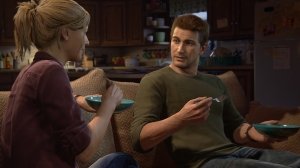 As this is an Uncharted game, the relationship between the characters is the most memorable part of the experience. There are all sorts of funny anecdotes and interesting stories dropped in conversation between the characters. There is a neat feature where if an anecdote is interrupted, when the inevitable gun fight ends, that character resumes with a “where was I” before picking the story back up again. It’s a nice little touch that I wish more games had though I wish more games had that much faith in their characters and dialogue.

When it comes to gameplay, you know what to expect from an Uncharted game. The game is still platforming on conveniently highlighted ledges and shooting from behind convenient chest-high walls.

While the core gameplay didn’t change, Naughty Dog have made some refinements and improvements. Unlike previous games that used obviously highlighted ledges and objects to grab onto, the game does a better job of blending platforming objects into the scenery. The result is something much more natural. It reminded me of Assassin’s Creed in that it didn’t hold your hand when platforming. You can’t use everything for movement but the environments look better as a result. You also don’t need to hit the X button to jump to every new ledge. If you can reach another ledge by pointing the left stick, Nate will automatically grab it. That makes for a much smoother movement experience.

From a combat perspective, the AI has been improved. The AI will attempt to flank you so you have to be aware of your surroundings at all time. You don’t have Joel’s super hearing from The Last of Us so you need to be on the lookout for trouble on your way. Sometimes your AI companion will help you with that but not always. This game also sees the introduction of destructible cover. I vaguely recall this in small sections of previous games but it’s a lot more prevalent in this game so that’s something else to keep you on the move.

Stealth also plays a large part in combat. Nate can move through tall grass and foliage, along cliffs and between cover in order to stealthily make his way to an enemy before silently dispatching him with a stealth kill. One of the other mechanics brought over from The Last of Us is that your AI companion doesn’t blow your cover or set off any traps regardless of where they are relative to you and the enemies’ sightlines. Because of the improved AI, there’s an increased emphasis on stealth that wasn’t in the previous games. Earlier Uncharted games put the emphasis on cover-based shooting because you didn’t have much in the way of difficult enemies. The enemies in A Thief’s End are a bit too smart and bullet-spongey to take down quickly without getting overwhelmed. 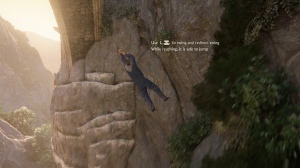 There are a couple of new mechanics for platforming that might seem familiar to those of us that played the new Tomb Raider games. There is the use of a piton to climb soft rocks. That we saw in the PlayStation Experience demo but that’s also in the latter half of the game and used sparingly. They also introduce a rope swing mechanic that differs from Tomb Raider in that it’s not just a platforming but a combat tool as well. You can use the rope swing to quickly move to lose enemies. You can also shoot from the rope which is pretty cool if you can pull it off. I can’t but I like the idea of swinging from a rope and mowing down enemies with an assault rifle. Well, you could if the enemies weren’t more bullet-spongey than usual.

One thing that gets brought up a lot in discussions about Uncharted 4 is that it feels like a send-off for the franchise. While it certainly does feel like an ending, they’ve left themselves enough wiggle room that you can see how they can make the announced single-player DLC work in the events and lore established by the series. Similarly, that wiggle room could allow for future full Uncharted games to be created.

From a technical standpoint, this is the best looking game on the current console generation. I don’t think anyone is disputing that point either. Sure, Naughty Dog missed its target of running the game at 60 FPS (it only runs at 30 FPS) but the trade-off results in a game with some of the highest graphical fidelity and detail in gaming, not just console gaming. The environments are filled with detailed and life-like vegetation. The market in Madagascar is full of people. Sure, the set pieces aren’t as spectacular as previous games which already took them up to 11 but the whole game is just a visual tour de force that won’t be matched until the next stage of PS4/XB1 consoles. 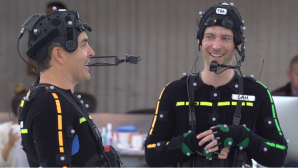 As always, the voice acting in Uncharted is the best in the business. It is helped by the writing but the acting isn’t going to carry bad writing and the writing wouldn’t carry bad acting. The newcomer to the cast is Troy Baker who plays Sam. Being malleable of voice, Baker does his best to sound like someone who could believably be Nathan Drake’s brother without trying to do a Nolan North impression.

By the way, Uncharted 4 also has a multiplayer component. While it looks pretty good and runs at a smooth 60 FPS, it adds absolutely nothing. It’s a time sink at best. It exists and that’s probably as much consideration that Naughty Dog gave it. While they did add some neat features like earning in-match money to spend on various boosters, it’s nothing particularly special apart from some vaguely Uncharted-themed special weapons. Honestly, I preferred Uncharted 3’s multiplayer. 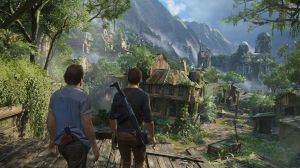 Inevitably, Uncharted 4 will be compared to Rise of the Tomb Raider. I don’t think that comparison will take very long for most of the aspects of the games. The audio, visual and story elements of Uncharted 4 are far superior to ROTTR. The graphics are the best on console. The voice acting is actually good. And there’s actually a story. These elements are just objectively better in Uncharted but we also know that these are what Naughty Dog has been recognized as an industry leader in.

Gameplay is a little more of a toss-up. I find the gameplay harder in Uncharted 4. That doesn’t necessarily better or worse. Both push you in the direction of prioritizing stealth to make engagements easier but Tomb Raider lends itself better to gunning down scores of enemies and using the environment to kill scads of enemies in a spectacular fashion. The AI is smarter in Uncharted and it can get to the point of frustration when they flank you and kill you when you just want to recover some health. I don’t think that one game plays objectively better than the other. If you want an easier time, you’ll prefer Tomb Raider. If you want more of a challenge, even if it can seem unfair at times, you’ll go for Uncharted.

Uncharted 4 was reviewed on PlayStation 4. Your impressions of the game may differ.