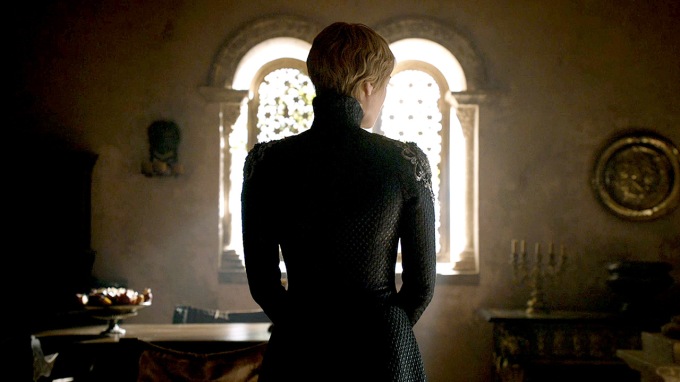 What is hype may never die. There were a lot of loose plot threads heading into this season’s finale. Not only were they paid off spectacularly but we are set up for the stretch run of Game of Thrones with a series of mic drops as the episode came to an end.

So I suppose that we should start at the beginning but there’s a lot to go through in this episode. Just when you thought that they spent the whole time and effort and budget on the Battle of the Bastards, they came back with an even bigger and more impressive episode.

Last week, I talked about the epic directing that Miguel Sapochnik did putting together the Battle of Winterfell. He immediately outdid himself in the opening fifteen-minute sequence this week. Helping him was series composer Ramin Djawadi whose music was equally as critical to the impact of the opening scenes. In an unusual music piece for the episode, the score relied heavily on piano with some cello underneath. Heavy use of deep strings is typical. The piano was entirely new which set a tone for the trials of Ser Loras and Cersei. The music told us that something big was about to happen. It’s kind of like the Rains of Castamere at the Red Wedding. The music told us something big was about to happen.

The visuals for the scene shouldn’t be short-changed either. The opening showed preparations for the trial of all the main players. We seamlessly bounced between Cersei, Tommen, Maggie, Loras and the High Sparrow in a near soundless scene as they prepared for the trials. The silence was only broken by the aforementioned calm yet foreboding piano music and the bells of the Sept of Baelor signalling the impending trial.

While Loras’s trial was nothing important, the immediate aftermath was amazing. Again keeping with the juxtaposition used earlier, we spliced between Qyburn using his little birds to draw Lancel to the wildfire under the Sept, luring Pycelle to his death and Queen Margaery realizing that escape from the Sept was a prudent idea.

Well, I’m not sure that Lancel’s part was really needed or intended but it was this great suspenseful scene as we watched Lancel crawl feebly to the melting candles as Maggie was trying to escape the Sept as the Faith kept everyone locked in the building. Cersei had been teasing the use of wildfire for a while now so it really was Chekhov’s Wildfire. We knew that it was coming but just blowing up the Sept as Cersei watched from the Red Keep wouldn’t have made for as powerful a scene. The surprise would have certainly made an impact but it was the tense building of “this is about to happen” and you, as a viewer, are enthralled with the scene playing out as Lancel crawls to blow out the candles to save the day while Maggie tries to force an escape. You get so much more out of the scene from the build than just the payoff.

So in a bright green flash, a number of big characters were incinerated from Westeros. The High Sparrow got the most spectacular death as we briefly saw him dissolve in the heat. The explosion also got Maggie, Loras, Mace Tyrell, Uncle Kevan Lannister (Hand of the King), the Faith and a number of unnamed townsfolk. Oh and Tommen saw all that he lost from a distance and, whether it was heartbreak from losing his wife or realizing that his mother was completely mad, stepped off his balcony and to his death. With the body count in this episode, Tommen’s nonchalant demise comes as the true surprise because it was unexpected. Cersei did everything for her children and the last of them died because of her actions.

It’s funny how Maggie was the biggest foil for Cersei and had everyone outsmarted to the end. She cut a deal with the High Sparrow to have Loras returned to Highgarden rather than living in servitude to the High Sparrow and the Faith. She figured out that Cersei not attending her own trial was a trap when the High Sparrow couldn’t. She turned every dead king, foolish child and overbearing mother into an opportunity but couldn’t overcome the bravado of an old man who thought he had won the game. The High Sparrow thought he had turned the tables on Cersei’s plans to use him but she had the last laugh.

While Lady Margaery wanted to be the queen and she certainly wore the pants in the relationship with Tommen, it’s Cersei who is the Queen and ruler of the Seven Kingdoms. Cersei’s plans all seemed to revolve around protecting her children and putting them in power. Killing Ned and Robert helped her accomplish that for Joffrey. She had lost her hold on her children when Tommen married Maggie which is what the destruction of the Sept was supposed to help correct.

Most dangerous for the realm is that Cersei no longer has any children to consider. It’s just she and Jaime against the whole realm as far as she’s concerned. I can’t imagine that she will be a kind and diplomatic ruler if there is nothing else for her to lose.

A few things can come between Cersei and power, though. The most dangerous might be closest to home. Jaime walked in as Cersei took the throne in an appropriately dark scene. While he was able to stop the Mad King from using the wildfire to burn all of King’s Landing, his sister and lover used Aerys’s wildfire to burn a number of townsfolk and her enemies. Viewers quickly took to calling Cersei the Mad Queen for a reason. Even the Jaime that everyone vilified at the start of the series would be deeply troubled by this. While there will be a lot of people seeking vengeance on Cersei, perhaps it’s Jaime’s calling to save Westeros from another crazed ruler.

Meanwhile, in the North, Littlefinger freely admitted to Sansa that he’s only helping her to take the Iron Throne and wants her. It’s all of Lord Baelish’s greatest hits in one handy offering this week. We have Littlefinger plotting to take the Iron Throne. We have Littlefinger creeping on Sansa who took the place of her mother. And we have Littlefinger clearly up to no good and only one person (Sansa) can spot that he’s up to something. We can look forward to the battles between the living and the dead and the Crown and all who oppose Cersei (definitely Team Blood and Fire but possibly the North as well) but Littlefinger is still the wild card. Until he plays his hand, we don’t know how any other battle will play out. While the show looks to be heading to more war than political intrigue as its focus, Petyr will still keep the political game going.

Also in the North, they remember but very selectively. For example, they remember Jon Snow building an alliance but not that Sansa brought the armies of the Vale to save the day. They also seem to forget that Sansa is the last remain true-born and/or legitimate heir to Winterfell. If Lyanna Mormont can be head of House Mormont, Sansa Stark can be the Queen in the North. And they also forget that the last time that they chanted “DAKINGINDANORF,” that guy ended up getting murdered because he crossed the wrong houses.

But it was a rousing speech by the one and only Lady Lyanna Mormont that rallied the North behind Jon when it looked like old tensions with the Wildlings and concerns over the arrival of winter looked the cause any temporary alliances to fray. Her late addition to the series aside, she’s definitely a frontrunner to be on the Iron Throne. Of course, qualifications and competence seem to hardly earn anyone a job, especially in Westeros.

Still in the North-ish, Arya is back. We found out when she slit Walder Frey’s throat. Many have pointed out that the sins of the Red Wedding have been visited on its planners. Tywin Lannister took a crossbow to the chest. Roose Bolton was stabbed in the chest. And Walder Frey had his throat slit. It’s poetic justice as we learn that Arya did learn some assassin skills while at the House of Black and White.

Across the Narrow Sea, Dany finally set sail for Westeros. She left Daario behind to manage Essos in her place which is probably a catastrophically terrible idea. He can lead a bunch of sellswords but I’m not sure he’s ever shown much to be ruler material. That being said, all her qualified rulers are on a boat with her.

The episode ended with Dany’s massive fleet setting sail to burn Westeros to the ground. Not only is it the Iron Fleet and the remnants of what the Masters had but Varys’s earlier excursion to Westeros for allies went well. He made friends in Dorne who also happened to become acquainted with Lady Olenna Tyrell in the immediate aftermath of her heirs being nuked. I doubt Varys had to do much work to get the Tyrells and Martells to declare for another Targaryen seeing as they were Targaryen allies before Robert’s Rebellion. So the fleet was so large because two more Houses have declared for change in Westeros.

Overall, this is probably the best episode in the show’s history. I know a lot of people said that about last week’s episode but The Winds of Winter combined massive blockbuster set pieces with important story and character moments that was ended with a series of epic moments that just kept building the hype for next season again and again. The story elements set this apart from last week’s Battle of the Bastards for me. Game of Thrones most certainly could and should pick up a few more Emmys after this episode. I can only hope that Miguel Sapochnik just guaranteed himself a payday for the series finale after these last episodes.

Oh and R+L=J was confirmed. I suppose some people were excited about that. Now stop shipping Jon and his aunt unless you want to also stop complaining about the Lannisters’ twincest.

And that will do it for another season of Game of Thrones. Presumably, we’ll be back for more next April. If the reports are true, we’ll have two shortened seasons to close out the series. I’m sure they can get twenty episodes out of the action that’s left but we’ll have to see what thirteen episodes of Season Seven and Eight bring us next spring.