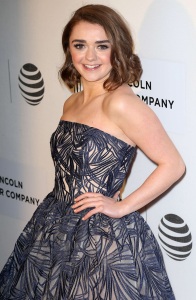 Despite the fact that the temperature is supposed to be in the mid-teens (Celsius) in my part of Canada on July 1st, make no mistake. Summer is coming. Everyone around here makes the same damn Ned Stark joke so I want to lazily spin it on its head. Considering that Ned’s head is no longer attached to his shoulders, I can’t imagine that would be difficult. By the way, this week’s Game of Thrones review drops tomorrow rather than the usual Friday post date.

Anyway it’s Wednesday which means that it’s time for the links. Since Game of Thrones just wrapped up, let’s kick off with GoT star Maisie Williams.

The House’s Benghazi Report says that there was no wrongdoing on Hilary Clinton’s part. That’s not going to stop it from being a Republican talking point but she has something to fire back with. (New York Times)

Despite fears of the foolish, the legalization of marijuana hasn’t led to the downfall of society. In fact, their teen marijuana use is lowest in America. (Foundation for Economic Education)

A new pilot program in Michigan is putting people on government assistance through drug testing to remain qualified for welfare. Of 303 people tested, none have tested positive. It’s as if they’re using welfare to live. (The Guardian)

A researcher says that Canada is lacking in work-life balance to other major countries and it might make it hard for companies to retain their younger talent. (The Canadian Press)

Matt LeBlanc is reportedly telling people it’s either he or Chris Evans for the next season of Top Gear while fans are asking for a new core trio of LeBlanc, Chris Harris and Rory Reid. (The Sun)

Microsoft’s attempts to force Windows 10 down your throats cost them $10,000 after a lawsuit in California. (Extreme Tech)

I wasn’t sure what from Game of Thrones to run in this post so here’s the music from the opening of the episode.