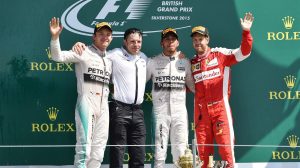 Our week-long preview of the 2016 Formula One World Championship has finally come to an end. After looking at the driver, teams, rules and video games, it’s finally time for us to pick a winner. The story heading into this season has been whether Ferrari has made up enough ground over the off-season to be able to challenge Mercedes for the top step of the podium. Considering how dominant Mercedes has been the last two years winning 32 of the 38 races since the change in engine formula, that was always going to be a big ask. Perhaps, it’s still far too big for this season.

Since I often get complaints about this, yes, my top six are identical to last year’s standings. The only change I can see year-to-year is Nico jumping Lewis to the championship. That’s down to luck and how well the car suits the drivers. Lewis likes a car predisposed to oversteer while Nico is trying to transition away from a car that understeers.

Based on their history, I have to give the nod to Lewis Hamilton to score his third consecutive World Drivers’ Championship. There’s always a chance that both drivers could return to 2014 form when there was a championship battle. Nico has to step up consistently over the course of the season and Lewis is just too good at getting into Nico’s head.

Ferrari is clearly ahead of Williams and Williams is clearly ahead of the rest so positions three through six in the WDC are easily sorted. There’s a chance that Massa could best Bottas but Val is the future of that team and showed in last year. Hopefully the stars align so he can score a win this season.

Further down the order, I think that Toro Rosso look strong enough in testing that they will turn some heads this season. Verstappen and Sainz were pretty close on points last season but Max was the far superior driver. If he can mature and stop making rookie mistakes, he’ll absolutely trounce Sainz. I’d hazard that if the pundits are right, Max should trounce everyone else on the grid in equal or lesser equipment too.

As my WCC predictions will indicate, my pick for 5th in the championship is Force India. Last season, Sergio Perez topped teammate Hulkenberg and I see it happening again this year. I’m a big fan of The Hulk (we won the 2015 WDC in F1 2015) but he’s not as soft on the tyres as Perez. Checo’s ability to maximize the life of his Pirelli’s is his most valuable asset and that will be critical in 2016 with the new tyre rules. I have to give him the advantage over Hulk this year again.

Rounding out the top ten is Daniel Ricciardo. I suppose his success could be entirely down to his Renault / Tag Heuer engine. If there enough improvements, he can score a top ten in the WDC. Otherwise, Sainz is ready to pounce for a top ten. Maybe Alonso can surprise as well but that’s, again, down to the engine.

As I mentioned above, there are some familiar names in familiar places in my predicted WCC table. For all the media trying to sell you that Ferrari can catch Mercedes, I’m just not buying it. Williams is likely the clear next best so they retain a predicted 3rd position.

Fourth goes to Toro Rosso. It all comes down to money in my eyes. They and Red Bull are the two teams in the midfield with both money and potential. Force India should be 4th this year but I just don’t rate their chances given concerns over money and their ownership situation. Red Bull is the odd one out from the group because of the Tag Heuer (né Renault) engine being down on power to the Mercedes and 2015 Ferrari power units. It’s almost process of elimination that sorts 4th through 6th in the WCC table.

Renault and McLaren is a toss-up to me. It all comes down to the reliability of that Honda engine. McLaren could very well luck their way as high as 5th if the power unit holds together. They also could barely be ahead of Haas and Manor and stay 9th in the Constructors’ table again if it all goes to pot. It didn’t exactly look bulletproof in testing so I’m not sold on McLaren being able to capitalize on the power improvements from Honda. I think they should be faster than Renault solely on the speed of the chassis. That doesn’t mean that it’ll be a return to glory for Macca, either.

That leaves the three teams at the back. Like the midfield battle, it comes down to money and potential. Money is the one thing that Sauber don’t have. I can’t see their current money woes boding well for their mid to late season form. Given their reliability problems in testing, I have Haas in 10th but that could easily be 11th if they struggle to finish races. By process of elimination, Manor is in relatively good shape. That new Mercedes engine helps their cause this year.