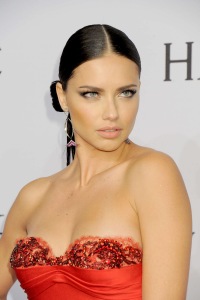 Yeah, I know it’s Valentine’s Day but how many people actually give a toss? I suppose that’s because I’m single but maybe it’s also because I’m a guy. Those are two things that make me predisposed to not being particularly arsed about a corporate holiday. Okay, I’m a cynic too. Three things that make me think that Valentine’s Day is a wasteful cash grab.

Anyway, it’s Sunday which means that we have to do the links. Let’s kick things off with Adriana Lima.

About a third of leaked NY police contracts have clauses that allows for the destruction of civilian complaints against officers. Doesn’t that make you feel safe about policing? (The Guardian)

How is Hilary getting positive coverage from the media in the wake of a groundswell of Bernie support? By damn near “blackmailing” the press. (Gawker)

The Clinton campaign is in front on the power of superdelegates. The DNC sees superdelegates as a means of protecting itself from grassroots groups. (Truth in Media)

And the DNC is trying to shore up its war chest by rolling back President Obama’s ban on the Democratic Party receiving contributions from federal lobbyists. Can that California ballot initiative about wearing your biggest donors names go to the federal level? (Washington Post)

Another week, another story on Bernie Sanders considering himself somewhat socialist. The GOP wants people running scared of him as a tax-and-spend liberal but his social spending plans might be a net positive for the economy. (New York Daily News)

Donald Trump wants to bring back “advanced interrogation techniques” (AKA torture). Senator John McCain says that it doesn’t work and anyone who believes it is a liar. (NewsMax)

With the Swiss working towards it and a new government in Ottawa, is it time for Canada to introduce a guaranteed basic income? (Toronto Star)

Scientists have found evidence of gravitational waves coming from black holes. It seems like a little thing on its own but this could have massive spin-off potential. (BBC News)

Win Butler of Arcade Fire took a moment to talk about how Canada gets it right compared to America after Team Canada trumped the US at the NBA All-Star Celebrity Game. ESPN panicked and cut him off. So they’re not on Team Bernie.

And just in time for Valentine’s Day, here is how guys apologize.