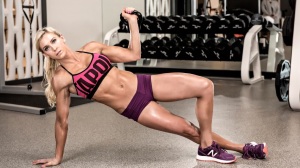 Wrestling fans will notice that the title is the theme of tonight’s Royal Rumble. I’m hoping that All wins tonight but I’m not going to put money on that given how the Fed has booked the last 20 months. By the time ‘Mania rolls around, the Fed will have given Reigns a non-stop 22-month push for one Wrestemania moment. And you wonder why Raw’s ratings have tanked over the last few years.

Anyway, it’s Sunday which means it’s time for us to do the links. Let’s kick things off with WWE Divas Champion Charlotte.

A number of prominent Conservatives have taken to the pages of the National Review to explain why Donald Trump would be disastrous for the GOP. (National Review)

Dr. Mona Hanna-Attisha talks about her fight to expose the problems with Flint’s water. (CNN)

It may not be Flint in the midst of a water crisis. There might be a whole host of major American cities that will soon have the same problems made public. (Gizmodo)

John McAfee, formerly of McAfee anti-virus fame, is running for President on the Libertarian ticket. He is not a fan of the Obama administration’s policies about data privacy. (Business Insider)

The low Canadian dollar is helping tourism again. What is old is new again. (Bloomberg)

Blame for the poisoning of a former KGB agent with radioactive tea has been laid at the feet of Vladimir Putin. (Washington Post)

AJ Daulerio has shut down Ratter until the Hulk Hogan lawsuit is done. He might have wanted to keep it running to sell it pending the result of the Hogan suit. (Newsweek)

The WWE is running the Royal Rumble this weekend and it’s either shaping up to be one of the best or worst of all-time depending on who you ask. The real interesting part of the Rumble is how it works for the refs according to Jimmy Korderas. (Chair Shot Reality)

And here are all 32 NFL team logos as wrestlers. (Uproxx Sports)

In bad news for ESPN, 56% of cable viewers in America would drop them in a heartbeat if it meant saving $8 on their cable bill. Netflix or ESPN? Easiest choice ever. (Tech Dirt)