The first race of the season is always an interesting one. Teams are coming to grip with new tyres, figuring out how their cars work best and where they stand in the field this year. Some teams struggle when unloading to start the season, others have it well under control.

This year, it was the Lotus team that had it figured out when the lights went out for the first time this season. While Red Bull had dominated practice and qualifying, their pace didn’t seem to translate to the race. It was Kimi Raikkonen who was the only driver to really make a two-stop race work en route to opening the season with a win.

Race day didn’t start with a race but with the second and third parts of qualifying. A very wet track on Sunday forced a delay to the start of Q1. The session ended with the track virtually flooded and with sunset approaching rapidly, the remainder of qualifying was delayed to Sunday. As was typically the case during dry sessions, the Red Bulls were fastest on the considerably drier track.

However, once the lights went out on the race, it didn’t go all Red Bull’s way. Webber had another slow get away and fell deep into the top ten. It was Felipe Massa who jumped to 2nd with teammate Alonso in tow. Also making an outstanding start was Raikkonen who jumped from 7th to 4th by the end of the second lap.

The key to success seemed to be minimizing time on the quickly degrading super-soft tyres and getting on the medium tyres (this weekend’s prime tyres). Jenson Button was the first to make the switch on Lap 4 with the rest of leaders quickly following. Interestingly, it seemed as though the Ferrari was able to get more out of the options than the Red Bull as the first stint went on with the Lotus being even better. 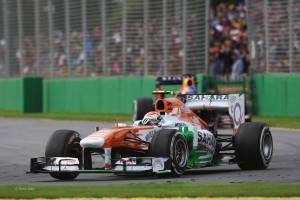 The big beneficiary was Adrian Sutil. He was the highest qualifying driver to start on the medium compound tyres which meant that he stayed on track while the leaders pitted to get off the options and gained the lead. He wasn’t as fast as the train following his of Vettel, the Ferraris and Raikkonen but he was quick enough to stay in front. However, he lost the lead on the exchange pit stops as Alonso used the fresh rubber from his second stop to leapfrog Sutil who made his first stop a lap after Alonso’s stop.

That second round of pit stops put Kimi Raikkonen in front. The Lotus driver was the only one of the front-runners to try a two-stop strategies rather than the three-stop strategy that the majority of the field favoured. He lost the lead when he came in for his second stop but regained it when the remainder of the leaders came in for their third and final stop.

The win was Raikkonen’s 20th of his career and the 2nd since he returned from his two-year rallying sabbatical. It was also the 18th straight race in which he scored points dating back to last season. Fernando Alonso was the best of the three stoppers with a second place finish. Pole sitter Sebastian Vettel rounded out the podium with a third place finish. Coincidentally, the last time these three were on the podium together (2012 Abu Dhabi Grand Prix), they finished in this order as well.

Felipe Massa put in a great performance as he began the defence of his race seat with a fourth place finish. Lewis Hamilton managed to convert a slightly unorthodox three-stop strategy into a fifth in his Mercedes debut. Mark Webber’s slow start hurt the potential that his day had but he managed to salvage a 6th. Adrian Sutil’s final stint was a long one on the super-softs which saw him plummet down the standings to 7th where he was just ahead of teammate Paul di Resta in 8th. Jenson Button was the highest finishing McLaren in 9th in what was a miserable weekend for the Woking squad. Romain Grosjean overcame some car problems to round out the points in 10th.

Not only was this weekend a chance for teams to work out the bugs, it was one for the FIA too. For the first time since the implementation of DRS, a reliability problem with the telemetry system effectively crippled the race control to car warning system. 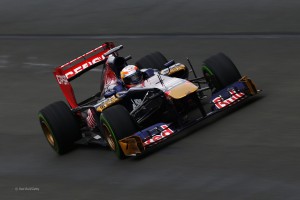 On Saturday morning, the FIA said that the telemetry system was having issues with the link between race control and the cars so it was shut down. This meant that the drivers weren’t receiving any flag notifications on their steering wheel. Similarly, DRS couldn’t be deactivated so it was left on after the required 2 lap disabled period at the start of the race with the remainder of the race run under the honour system that no drivers would use it under yellow, in the rain or immediately after a safety car period.

I recall this happening in a fly-away Champ Car race in 2007 in which an engine control unit fault caused cars to engage the pit road speed limiter instead of the push-to-pass system. In that instance, Champ Car banned use of the push-to-pass for the race and deducted any illegally used boost from the driver’s allotment in the next event. One has to wonder what the FIA would have done if there was a rules violation because of this fault in one of their systems if it wasn’t completely blatant (like DRS deployed at the end of a yellow flag zone).

Speaking of bugs, it looks like Red Bull still hasn’t gotten a handle on its electrical systems yet. Both cars stopped transmitting telemetry back to the pit lane during the race. Webber also reported that the KERS unit on his car failed during the race. Considering how important KERS will be on next year’s car, Red Bull might want to talk to partners Infiniti and Renault about building and developing a more reliable energy recovery system for next year rather than one designed to fit in the best spot on the car for weight distribution.

Since this weekend’s race was in Australia, it’s only fitting that we talk about Mark Webber. Red Bull team boss Christian Horner has publicly said that the team will keep Webber as long as he’s competitive. However, with Mark getting up their in age and clearly pegged as the #2 to Vettel, how long does he want to stay with Red Bull? 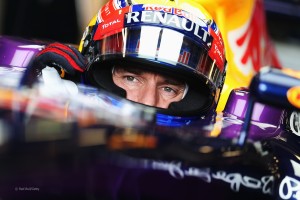 He’s been the subject of retirement rumours for several seasons. However, a recent rumour seems to indicate that retirement would only mean a retirement from F1. A hotly spreading rumour in the sports car world is that Webber has signed a deal to be the lead driver for Porsche’s new factory LMP1 program starting in 2014. If you recall, Webber got his start in sports cars and was the driver of the #4 Mercedes CLR LMGTP that flipped twice in the run up to the 1999 24 Hours of Le Mans. (He’s only gone ass over teakettle once in F1.)

The timing makes sense. Webber has been on repeated one-year deals with Red Bull and will be 37 at year’s end which would mean he’s no spring chicken by F1 terms. Porsche will be looking for somebody to lead the new factory effort and I don’t expect the factory Audi squad to willingly let one of their stars run a competing car. And with the big LMP1 teams getting every half-decent ex-F1 talent to drive for them, it would make sense that someone would be pursuing Webber. Now, it’s just a matter of if Webber will be driving F1 or Le Mans next year.

This wasn’t a good weekend for the McLaren boys too. Not only were they slow enough that they’re slipping back to mid-field pace but their weekend got off to a bad start when they found out that long-time title sponsor Vodafone would be leaving the team at the end of the season. The Vodafone branding has been on McLaren since 2007 when they left Ferrari after a short stint there. (Near as I’ve been able to piece together, Vodafone’s sponsorship of the Scuderia lasted about five years.)

From what I’ve been able to find, the title sponsorship cost Vodafone upwards of $75 million per year. In addition to owning prominent space on the sidepods and wings of the McLarens, the team was officially referred to as Vodafone McLaren Mercedes. That’s going to be a big and expensive sponsorship for McLaren to replace.

The team does expect to have a new title sponsor for next season and have already scheduled an announcement for December 2nd. So, is it going to be an existing sponsor, Telmex coming over from Sauber or someone completely new? Let the mass speculation begin.

Apropos of absolutely nothing, the Sports Business Journal says that NBC’s successful bid for F1 broadcasting rights in America was only $3 million per season. For the sake of comparison, ESPN bid $1 billion per season for 16 craptacular Monday Night Football games.

If Formula One was such an important part of its line-up why would Speed Channel bid under $3 million per year for F1? I know there are more costs than that to produce a broadcast. However, I can’t see it costing Speed more than another couple million to produce the broadcast. That’s a high estimate. Is F1 really so dead in America that Speed couldn’t sell, say, $5 million in ads to cover the cost of broadcasting a season of F1?

Also, if NBC is spending $3 million on F1 rights and maybe $2 million more on the broadcasts, how much is TSN spending for Canadian rights? They produce their show for what appears to be the broadcasting equivalent of buying off the dollar menu at McDonald’s. Yes, I’m going to keep harping on TSN until they at least pretend that they give a shit about Canadian race fans. Next week, I complain about their inconsistent flyaway race replay schedule which favours curling replays over a consistent F1 schedule.

We’re doing it all again next weekend with the second round of the 2013 Formula One World Championship. The Malaysia Grand Prix was an exciting race last year as Fernando Alonso won the race in changing conditions but needed a mistake by Sergio Perez to keep the then Sauber from taking the top step of the podium.

Weather usually plays a big role in what happens in Malaysia. Tyres will again dictate the results of the race. Medium tyres were the way to go this round. Whoever can get the most out of the tyres next weekend, without going too long on them in a stint (Sutil), will be in with the best chance of winning. Based on that, Lotus and Red Bull would be favoured but the Ferrari was no slouch. If the conditions change, it’s anyone’s race to win. Those Mercedes looked fairly impressive in the wet part of qualifying.