Since we did our look back at 2015 earlier this week, it only makes sense to look forward this week. It’s only logical to follow-up on our list of our favourite games of 2015 with a look at the games that we’re most excited about in 2016 with the Most Anticipated Games of 2016.

For the second year in a row, Sony’s flagship franchise from their biggest first-party studio takes the prize as our most anticipated game of the coming year. Now that we know Uncharted 4 will be released at the end of April, it’s safe to say that it won’t be making an appearance on the Most Anticipated Games of 2017 list.

Sony has been slowly drip-feeding us new footage and information about A Thief’s End over the last 18 or so months. The story will feature Nathan Drake’s brother reappearing in his life to drag him out of retirement for one last score. We know that Sully will be there. For the first time since Uncharted: Drake’s Fortune, it looks like we’ll be getting playable vehicles. And for the proper first time, there will be a grappling hook. Let’s see if this is implemented better than the Batman: Arkham series.

I love the Uncharted series and I’m usually the one who looks at heavily hyped games and think that the marketing is hiding the fact that the game can’t sell on its own merit. Uncharted is generally that game that is worth the hype. Considering there isn’t much in the way of must-have exclusives on either the PS4 or Xbox One, a GOTY-caliber Uncharted sequel could tip the scales in favour of Sony.

The Legend of Zelda (Wii U)

Speaking of critical console exclusives, while I wouldn’t think that a new Legend of Zelda game could be the big difference maker that pushes Nintendo over the top, I think that new Legend of Zelda game will push those gamers who were on the fence after Mario Kart and Super Smash Bros. The Zelda franchise is one of those iconic ones that might not be as popular as Mario but probably means more to the core gamer.

I’m not much of a Legend of Zelda guy. I’ve never actually played a game. However, even I’m willing to admit that the significance of launching a new Zelda game makes this the most anticipated game of the year for Nintendo fans. With the franchise moving open-world for the first time and the NX console coming as soon as this fall, the as yet unnamed Wii U iteration of Legend of Zelda could be the swansong to the Wii U. 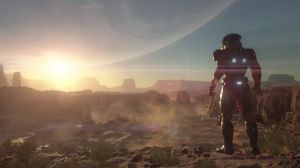 I’m a Mass Effect fan so I’m actually not surprised that I don’t have Andromeda at the top of the most anticipated list as I write this while wearing my N7 hoodie. This isn’t a bit. I actually own two N7 hoodies. I really love the Mass Effect franchise, count Mass Effect 2 among my five favourite games of all-time and probably wouldn’t be playing games if it wasn’t for this franchise.

There’s very little we know about Andromeda apart from the setting, the promise of a renewed emphasis on exploration and that Shepard isn’t the hero. You will play as Ryder who is leading an expedition to the Andromeda galaxy that departed just prior to the Reaper invasion of the galaxy. I actually am not even sure if this will be an exploration mission or a colonization/survival mission for the multi-race crew.

What interest me is that Mass Effect is a series that you can see drawing inspiration from so many different sources of science fiction. The story of Andromeda sounds very much like Star Trek in that BioWare is setting it up as being about exploration and discovery though something very different will happen in the game. It’s just like your average episode of Star Trek then. 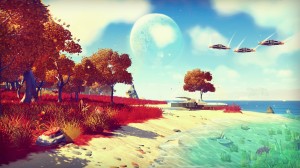 Given how long we’ve been hearing about No Man’s Sky and how many appearances it’s made on TV and Twitch, I’ve gotten to the point where I just want the game out so that we can either fan boy out or get disappointed. With all the hype, I’m fairly certain that it can only disappoint.

We’ve built up this massive space exploration game that lets you go from space to the ground seamlessly with combat at all levels. My question is how does this whole thing work. Is there a story? What is the purpose of combat other than to grief other players? Presumably there’s some sort of PvE in the game that will answer the previous two questions.

Of course, the most important question of all is will this game actually be good? With the exception of some space battles, this seems to be the interstellar equivalent to a walking simulator. Is that what everyone is hoping it would be? Sure, it looks very pretty but there is so much more that we need to know. I suppose that’s why the game needs to come out. When that happens, we’ll know what the game actually is. 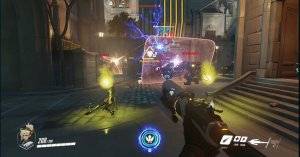 I’m not much of a first-person shooter fan. If you ever saw me try to play one online, you’d quickly realize that. However, I always seemed to find a role in Overwatch and enjoyed myself as a result.

Blizzard’s entry into the team-based FPS market has more in common with their MOBA Heroes of the Storm than it does with other games in the genre like Team Fortress 2, Counter-Strike: GO and Rainbow Six: Siege. With a focus on objectives, characters with a focus on special abilities rather than guns and the ability to change player-characters mid-match, Overwatch certainly isn’t going to blend in with the crowd. It’s success may depend entirely on that fact.

At the very least, I do like Overwatch’s business model. With a $40 upfront cost and all the post-launch content coming for free, it’s certainly one of the more appealing business models I’ve seen lately for a triple-A game that doesn’t include microtransactions or paid DLC. Considering how little gamers trust games that are loaded with season passes and DLCs and microtransactions, perhaps Overwatch could score millions of revenue solely based on the business model.

Rise of the Tomb Raider

Can I call this Xbox One timed exclusive a most anticipated game for 2016? Since it’s my list and since I was likely to buy this on PC regardless of which platforms I own, I’m going to call the second game in the rebooted Tomb Raider franchise a 2016 game.

The 2013 Tomb Raider reboot was a good game that bordered on great. It suffered from the worst case of (sigh) “ludonarrative dissonance” I’ve ever seen in gaming. Lara acted very timid in the cutscenes but was a stone cold killer in gameplay. It was as if the game starred two completely different characters or was the first example of a triple-A game whose protagonist had multiple personality disorder. The result forced the players to basically white knight with a controller in their hands to save Lara. If there’s one thing that Lara Croft should never need, it’s a white knight.

Because I intend to play ROTTR this year when its exclusivity period ended, I haven’t been reading the reviews or watching gameplay. I’ve seen generally good impressions of the game so I’m hoping that this game will be closer to Uncharted’s quality rather than feeling like an attempt to copy it.

Sometimes, a game doesn’t have to look like your usual cup of tea in order to interest you. Horizon Zero Dawn claims to be an action RPG that will borrow RPG elements from the likes of Assassin’s Creed and Skyrim. I never really got into those games so those aren’t really selling points for me.

However, the idea of a world overrun by machines that have taken the form of giant mechanical dinosaurs is something that appeals to me. While Far Cry is taking its standard gameplay and applying it to prehistoric times, Guerrilla Games is creating a futuristic prehistoric period where new meets old. It’s something that we haven’t seen in a game before and with the triple-A genre relying on remakes, reboots and rip-offs as its lifeblood, I’ll gladly take my chances on something new. 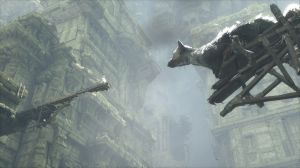 Extended periods of development hell is seldom a good sign for the quality of a game. There usually comes a point where a game is stuck in limbo until the publisher decides to cut their losses and shove the game out of the door. Just look at the likes of The Bureau: XCOM Declassified or Duke Nukem Forever or Aliens: Colonial Marines. All games stuck in development hell and all games that were poor coming out of it.

The Last Guardian sounds like one of those games designed to tug on the heartstrings. You play a young boy who takes care of a large creature called Trico. While there are platforming and puzzle solving elements to the game, it sounds like the primary focus of the game will be the relationship between the boy and Trico.

Back when this game was first being developed, a game of this nature would be unique in the market. Now, narrative and relationship driven games are a dime a dozen. Sure, some are better than others but it’s those high standards that The Last Guardian will be held to. What would be considered a great game in 2007 may not be good enough by the standards of 2016. Hopes are high for The Last Guardian but I think that it will inevitably fall short regardless of how good it is. 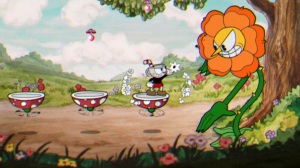 Speaking of games that have been in development for a while, Cuphead looks to be coming in 2016. While the game was first revealed in 2014, work started on it in 2010. Most of that work was on the amazing 1930s cartoon aesthetic that the game is going for with hand-drawn characters and backgrounds in the game.

In addition to the retro aesthetic, the little indie game out of Canada is also promising retro difficulty which was inspired by the success of Super Meat Boy. I’m sure this game would have landed higher on the list if it wasn’t for the difficulty. Retro difficulty tends to be a lot harder than I remember games being growing up. You would think that I would think the opposite but I would be wrong.

In recent years, we’re used to Ubisoft letting small teams in their studios work on little indie-sized projects that eventually get released. We’ve seen the likes of Child of Light, Valiant Hearts and Grow Home published by Ubisoft to critical acclaim while their triple-A operation flounders comparatively.

In 2016, EA will try this same approach with Unravel. It’s a small indie-sized puzzle platformer that reminds me of Little Big Planet (a franchise that I’m a huge fan of) with its own take on puzzle platforming. You play Yarny, a creature made of red yarn, who must use his own yarn to navigate the world around him. It looks like it will both be a physics-based platformer and tug at the heartstrings a little bit while you’re playing so I’m looking forward to seeing how this one turns out.